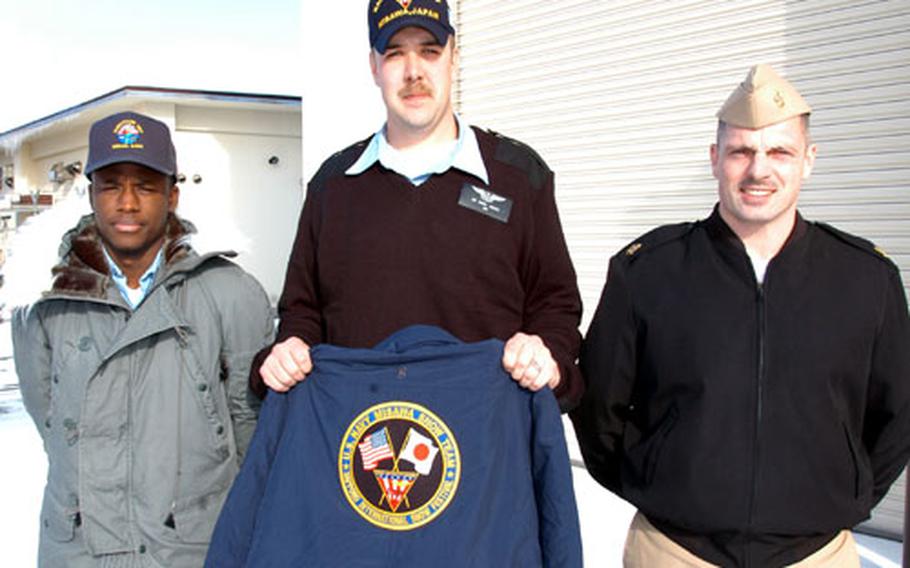 From left, Petty Officer 2nd Class Quintron Perry, Petty Officer 1st Class Aaron Walrod and Chief Petty Officer Eric Holewinski are three of seven team members from Misawa who will carve a snow sculpture for display at the Sapporo International Snow Festival in February. The U.S. team from Yokota Air Base, Japan, will be competing in the international snow carving competition. The Sapporo snow festival runs from Feb. 5 to 11 on Japan&#39;s northern island of Hokkaido. (Jennifer H. Svan / S&S)

Walrod knows what havoc rain can wreak on a painstakingly chiseled snow sculpture. &#8220;Last year, it rained on us. We had to go back the next day and do some major repairs,&#8221; Walrod said.

Walrod is with a team of seven that will represent NAF Misawa and its various commands at next month&#8217;s Sapporo Snow Festival.

The Misawa group will be one of two American teams from Japan at Sapporo. The U.S. Snow Sculpture Team, preparing for its 35th year of international competition at Sapporo, is based out of Yokota Air Base.

While the U.S. team will compete against other countries for bragging rights, the Misawa sailors go to Hokkaido&#8217;s winter wonderland as an annual trip of good will. It&#8217;s NAF Misawa&#8217;s 24th year in the festival, a tradition that began with a few sailors venturing north on their own to build snow sculptures, Walrod said.

The sailors will lodge at Camp Sapporo, a Japan Ground Self-Defense Force base. No one will judge their sculpture, carved from a 6-by-6-foot block of snow, but plenty will see it, Walrod said.

&#8220;School children come by every day asking for autographs, wanting to practice English,&#8221; he said. With those curious school children in mind, the sailors this year will carve Totoro, a furry forest spirit of children&#8217;s Japanese anime fame.

Other team members are Senior Chief Richard Villareal, Petty Officer 3rd Class Shane Arrington, Seaman Daniel Delmo and Seaman Apprentice John Defrancisco. None in the group considers himself an artist, but Walrod said the sculpting isn&#8217;t as hard as it looks. &#8220;You start out with a block of snow and use your imagination to sculpt it.&#8221;

The U.S. team from Yokota isn&#8217;t short on talent or experience. Dave Russo, the team&#8217;s organizer, will mark his 10th trip to Sapporo. New to the team this year is Tony Ting, an Air Force spouse and former captain of his college ice carving club.

Eighteen countries are vying in the international competition.

If you&#39;re going ...The 59th annual Sapporo Snow Festival runs Feb. 5-11. Opening ceremonies start at 6:30 p.m. on Feb. 5. The main festival site is in Odori Park, which stretches from east to west in the center of downtown Sapporo. More information about the festival can be found at: www.snowfes.com/english/place/.