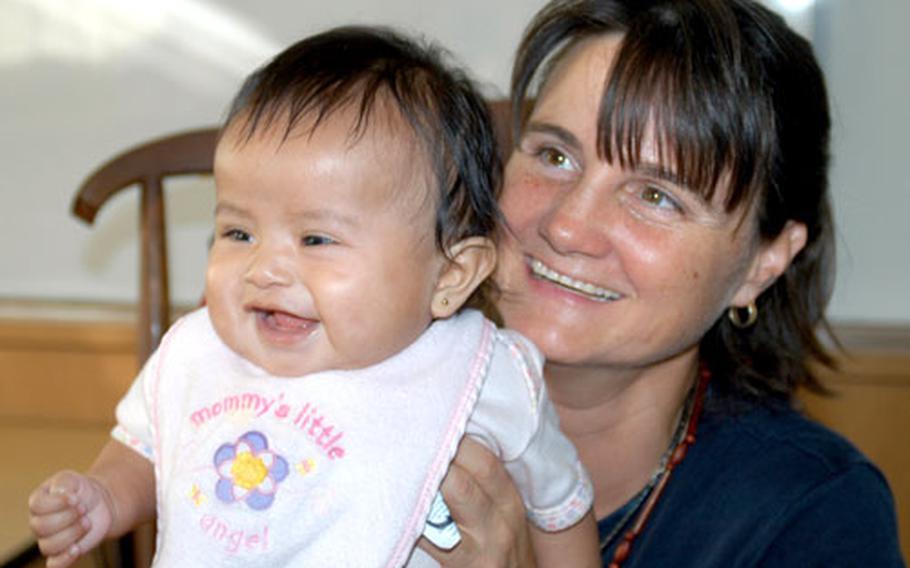 Sollars Elementary School teacher Tracy Rice holds her 4-month-old daughter, Cathy, whom she adopted this summer from the Macushi Amerindian tribe in Guyana, South America. The adoption will be finalized in November. (Jevvifer H. Svan / S&S)

Sollars Elementary School teacher Tracy Rice holds her 4-month-old daughter, Cathy, whom she adopted this summer from the Macushi Amerindian tribe in Guyana, South America. The adoption will be finalized in November. (Jevvifer H. Svan / S&S) 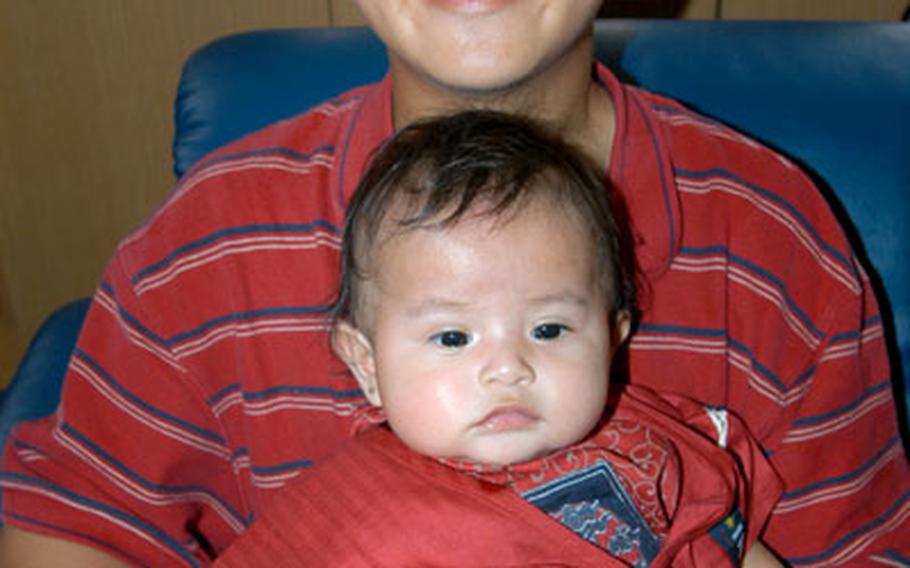 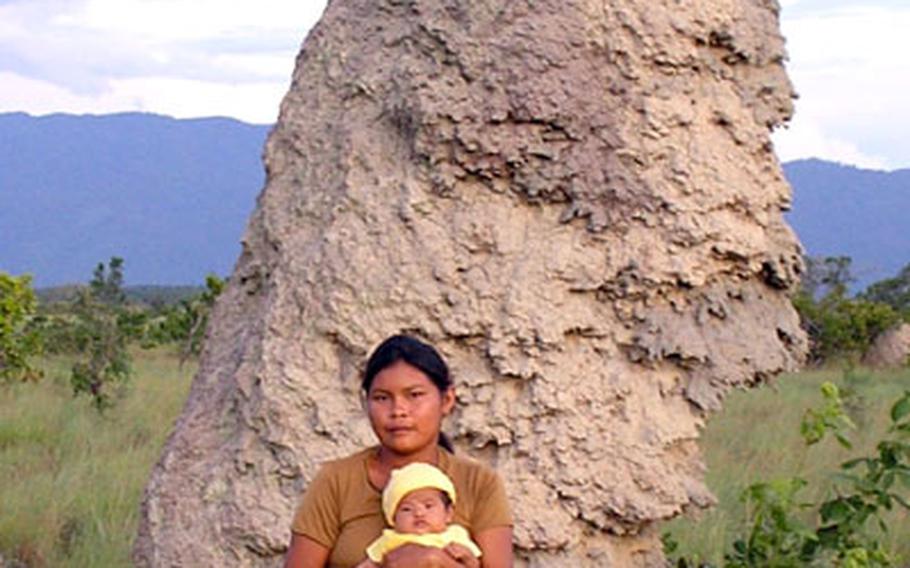 MISAWA AIR BASE, Japan &#8212; Like for most babies, a typical day centers on feedings, naps, cuddles and adoring smiles.

But 4-month-old Cathy Rice has no idea how special she is.

The hammock in her room with a tropical rain forest pattern is a clue. So is her middle name &#8212; the Japanese-sounding Akiku, meaning sweet-natured. Except it&#8217;s not Asian. The name belongs to the Macushi tribe, a group of Amerindians who live in the South American country of Guyana.

Cathy was born there May 3, a healthy 5&#189;-pound baby with dark olive complexion. But even before her birth, she was destined for a life beyond Moco Moco Village, where women make cassava bread and men hunt spider monkeys with poisonous blow guns.

When she first considered adopting a baby &#8212; Rice also adopted Eric when he was 9 &#8212; she never dreamed that path would lead her into Guyana&#8217;s hinterland, to the tropical Rupununi savanna near the Brazilian border that&#8217;s home to macaus and medicine men.

The Amerindians, as they&#8217;re called in South America, are indigenous to the region. In Guyana, they are about 7 percent of the population; the Macushi are one of only a handful of Amerindian tribes left.

The Macushi live as they have for hundreds of years &#8212; fishing, hunting and farming off the land. They sleep in hand-sewn hammocks under palm leaf-thatched roof huts with no electricity, running water or heat.

From the bitter root vegetable cassava, they make a flat, white, pancake-like bread that&#8217;s a diet staple. Their primary mode of transportation to the nearest town 14 miles away is by foot or bicycle.

Family connections opened the door to what Rice calls a unique situation &#8212; an American adopting an Amerindian baby from the jungle, so to speak.

&#8220;Maggie goes back every year. She takes my grandmother. They knew I was wanting to adopt another child,&#8221; Rice said.

On their last trip in January to the Harris family&#8217;s Manari ranch in Guyana &#8212; about seven miles from Moco Moco Village &#8212; the two women met 18-year-old Seleen Mario &#8212; a pregnant Macushi Amerindian. She was interested in adoption to give her child more opportunity, Rice said.

In April, Rice and her son traveled to Guyana to meet Seleen and her extended family. She took provisions for the baby&#8217;s birth, including baby formula, a netted crib (to keep out the bugs) and two suitcases of baby clothes.

Rice and her son divided their time between Moco Moco Village and the Manari ranch, bathing and washing their clothes in the same creek wild horses occasionally stomped through, sleeping under mosquito nets, and eating cassava bread, armadillo meat and alligator tail, cashew nuts and numerous fresh fruits.

Most important, they found Seleen&#8217;s family to be kind, welcoming and supportive of the adoption. The village Indian chief even gave his consent.

Back in Japan, Rice started the adoption paperwork and, with a mix of excitement and anticipation, awaited news of the birth. Peace Corps volunteers working in the area e-mailed digital photos of Cathy, who was born in a small medical clinic in Lethem 14 miles from Moco Moco.

Two and a half months later, when her U.S. adoption application was approved, Rice and her son returned to Guyana to bring Cathy home. She flew Seleen and the baby to Georgetown, Guyana&#8217;s capital, and with help from a lawyer and friends, Rice was able to complete all the legal paperwork in about three weeks.

Cathy has a permanent U.S. residence card; her adoption will be finalized Nov. 18, when Rice has a court date in Georgia, her legal state of residence.

She&#8217;s already had her first haircut, though not in the traditional sense. When she noticed Cathy wasn&#8217;t responding to loud noises, Rice had an ear and throat specialist examine her. Turns out, her hearing was fine.

Rice wants Cathy to know about her origins.