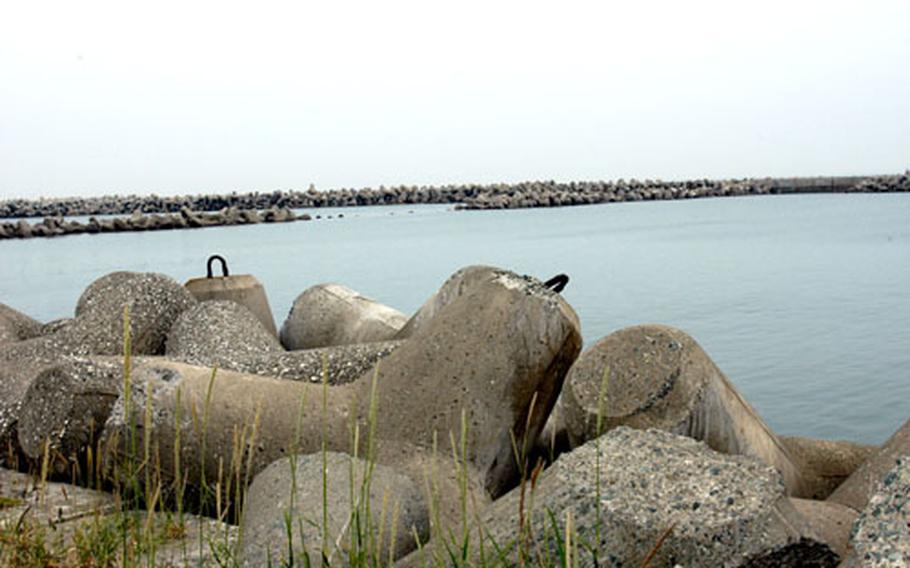 Cement jetties built around the water at Veedol Beach next to the Misawa seaport protect swimmers from undertow and rip currents. (Jennifer H. Svan / S&S)

MISAWA AIR BASE, Japan &#8212; For years, the Pacific Ocean&#8217;s strong undertow and rip currents have been off-limits to swimmers and surfers who are at Misawa Air Base under the status of forces agreement.

But a group of Misawa Air Base surfers wants to change that.

The Misawa Surfing Association plans to meet soon with Brig. Gen. Bill Rew, 35th Fighter Wing and base commander, to propose that some of the restricted waters be opened to surfers in the base club &#8212; but only after they pass a series of written and swim tests.

The proposal &#8220;doesn&#8217;t have anything to do with allowing unfettered access to the beaches for anybody,&#8221; said club member and experienced surfer Capt. James Nelson, a financial services officer with 35th Comptroller Squadron. &#8220;It&#8217;s going to ensure you have the knowledge and physical ability to manage that risk.&#8221;

All Pacific beaches between Hachinohe, about 15 miles south of Misawa, to Mutsu Bay on the Shimokita Peninsula are off limits to those here under the status of forces agreement because of strong undertow and rip currents. The exception: Veedol Beach, a beachfront protected by two jetties next to the city&#8217;s fishing port. Veedol opened in 2000.

Base officials say the policy is more than 20 years old but no one seems sure exactly when or why it was implemented.

Ron Stark, a longtime Misawa resident and master scuba diving instructor, said the policy was in effect in 1980. Then, the coastline from Cape Shiriya on the Shimokita Peninsula tip to the south side of Hachinohe seaport consisted of natural sand beaches with no man-made obstacles, making for dangerous rip tides, cross currents and undertow, Stark said.

&#8220;Today it is very different,&#8221; he said. Several coastal seaports have been expanded and erosion-control barriers have been added at various locations, altering the current in some places, Stark said. Areas just south of Rokkaisho and Misawa seaports have good surfing waves, and cement jetties and breakwaters deflect dangerous currents, he said.

Stark said he doesn&#8217;t advocate either position but surfers have a &#8220;valid idea. It&#8217;s time to re-look the policy because things have changed. These areas should be evaluated by safety officials.&#8221;

Safety officials are trying to do just that, said wing safety chief Lt. Col. Franz Plescha, but much of the information they&#8217;ve collected to date is conflicting and anecdotal. Some people say rip currents remain extremely strong and safety officials haven&#8217;t found data that they can compare to popular surfing and swimming destinations such as Hawaii and Okinawa. Even with such data, Plescha said, he&#8217;s unsure the comparison would be valid.

Nelson doesn&#8217;t discount the danger of rip currents but said he and surfing club members believe the risk is manageable. They say a handful of Japanese regularly surf in the restricted areas without incident.

Base officials said whatever is decided about surfers, there&#8217;s no way the coastline will be opened to swimmers.