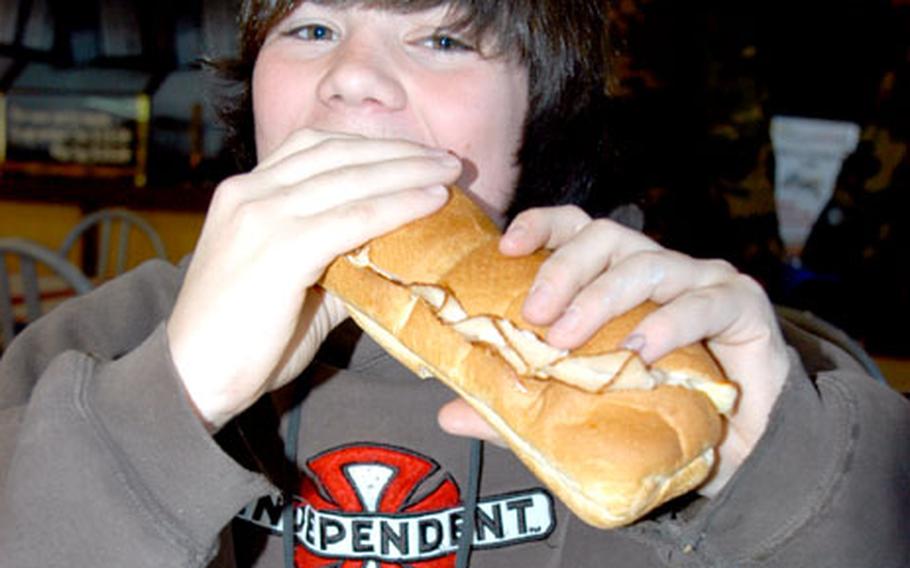 C.J. Cole, 15, bites into a Subway sandwich Friday at Misawa Air Base, Japan. Cole was among a huge crowd that flocked to Subway, which opened Friday in the food court. (Jennifer H. Svan / S&S)

MISAWA AIR BASE, Japan &#8212; They were thinking of lunch when they should have been thinking of school. But can you blame them?

Edgren High School students C.J. Cole, Lucas Duraccio and Anthony Fike were first in line for Subway&#8217;s grand opening at Misawa on Friday, having staked out their spots an hour before the cash registers hummed at 10:30 a.m.

After a trial run earlier this week, Subway officially opened Friday, taking the food court area once occupied by the arcade. Robin Hood Sandwich Shoppe was to close permanently Friday while the adjacent Baskin-Robbins will expand from 12 to 24 flavors and offer more specialty drinks. Those renovations are expected to take about two weeks.

Col. Sam Angelella, 35th Fighter Wing commander, was among the senior military leaders on hand for the opening. He credited the Army and Air Force Exchange Service for &#8220;taking care of the people here. It&#8217;s really important when you&#8217;re so far away from home.&#8221;

Subway corporate officials had a hand in determining the Misawa store&#8217;s best location and preparing the site, a 12- month process. To ensure the Misawa franchise delivers the same quality as stateside Subways, five AAFES supervisors attended two weeks of training this summer at the company&#8217;s Connecticut headquarters, Hansen said. The shop currently employs 20 people, some of transferred from Robin Hood.

Friday, word of Subway&#8217;s opening spread almost as fast as the smell of freshly baked bread: Before 11, the line from the store&#8217;s cash register snaked dozens deep down the ramp to Bookmart.

Staff Sgt. James Mysliwski took the edge off his Subway craving by snacking on a slice of giant sub that was offered up as part of opening ceremonies.

No word on whether Denny&#8217;s might come to Misawa but Hansen said Pizza Hut is to replace Anthony&#8217;s Pizza at the food court. Renovations are to start in January and should be complete by March, he said.

The new Subway sandwich shop at Misawa Air Base, Japan, offers the same menu varieties as any Subway in the States, according to Army and Air Force Exchange Service officials. Popular items include the Subway Club, meatball marinara, cheese steak, tuna, Cold Cut Trio and Veggie Delite. The six-inch subs run from $2.49 to $3.69 and can be made into a footlong sub for an extra $1.80.

Giant subs and sandwich platters are available for large groups. All sandwich combos can be made into salads or wraps. Also, several menu items are specifically for kids.

Call the restaurant at DSN 222-6858 for more information.