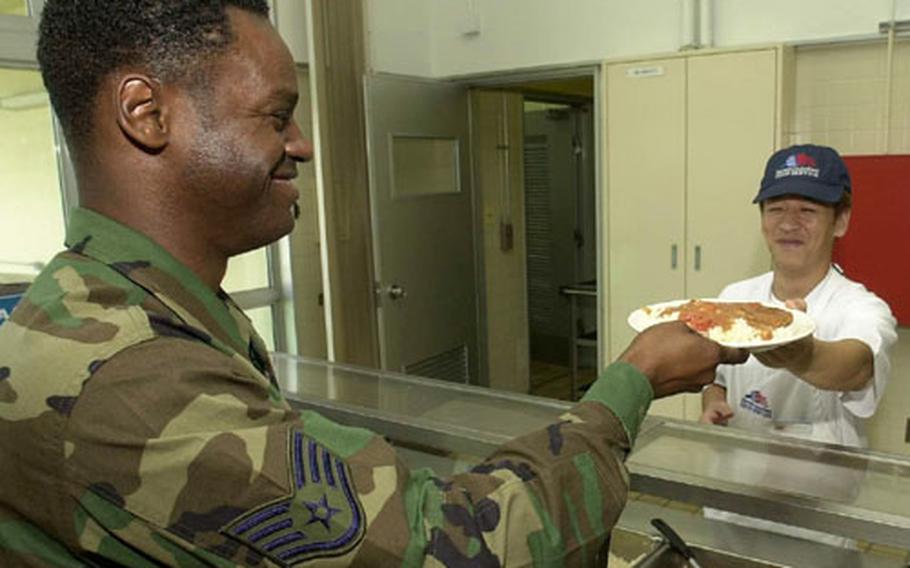 The squadron was notified they had earned the Air Force&#8217;s LeMay Award, citing the 700-member squadron as the best services unit in the large-base category worldwide.

His predecessor, Maj. Liza Paar, was the squadron&#8217;s commander for the awarded period and moved to a new assignment last month.

So, Mostert said, taking the reigns of Services is like joining a championship basketball team.

If there was ever a squadron that touches day to day the lives of a broad cross-section of military people here, Services Squadron wins hands down.

From the child development center to officers and enlisted clubs, to the dining hall and even mortuary affairs, more than 30 Services facilities offer a wide range of benefits.

Locale has provided the squadron and its people a focus.

He lauded the Japanese workers &#8212; who make up 50 percent of the squadron&#8217;s labor force &#8212; as an especially stable component when deployments pull his troops away.

As the second largest employer of military dependents on base after the Army and Air Force Exchange Service, Mostert called maintaining an adequate workforce &#8220;challenging.&#8221;

Because of the military lifestyle, a high level of turnovers hits the squadron almost constantly.

Mostert lauded the efforts of 35th Fighter Wing commander, Brig. Gen. Dana Atkins, for placing emphasis on quality of life initiatives that brought the squadron more than $1 million in additional funding from Pacific Air Forces in the past year.

Portions of those funds were used to purchase new equipment for the 24-hour Potter Fitness Center, and the conversion of a corner of the Grissom Dining Hall into a cyber caf&#233; with an alcohol-free sports pub motif.

With the big award ready to occupy a prominent place at the squadron, Mostert said neither his employees nor himself are about to rest on their laurels.

Mostert said plans are in the works for a video gaming network at the Mokuteki community center.