Despite being greeted by a steady snow, airmen from the 35th Civil Engineer Squadron at Misawa Air Base, Japan, happily walk off a chartered jet Wednesday night. About 70 of the squadron’s airmen returned from a four-month deployment. (Jennifer H. Svan / S&S)

Despite being greeted by a steady snow, airmen from the 35th Civil Engineer Squadron at Misawa Air Base, Japan, happily walk off a chartered jet Wednesday night. About 70 of the squadron’s airmen returned from a four-month deployment. (Jennifer H. Svan / S&S) 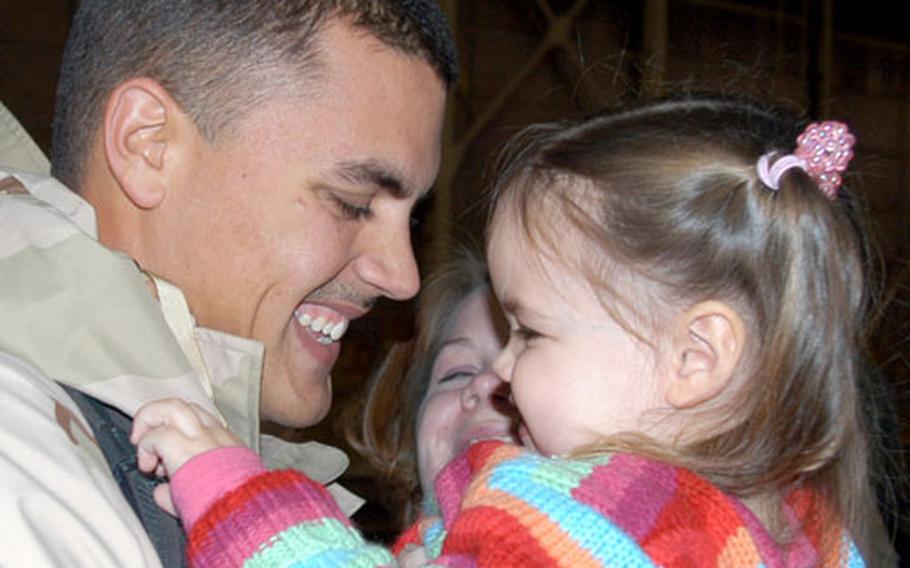 Seventy airmen from the 35th Civil Engineer Squadron tramped through the snow Wednesday night in tan battle-dress uniforms to embrace their loved ones for the first time in more than four months.

It was downright cold, but after life in the desert Misawa felt like Kansas after Dorothy&#8217;s stint in Oz.

Shortly after 7 p.m., they disembarked from a chartered flight outside Hangar 949 after an arduous journey home that took them from Kuwait to northern Japan via Ireland, Alaska and Yokota Air Base.

Scheduling priorities delayed the flight, military officials said, keeping the anxious airmen and their families in limbo for several days.

Jet lag and anxiety, however, quickly melted into elation and relief as the airmen received a hero&#8217;s welcome inside a hangar warmed by eager families, a huge food spread and heating fans on full blast.

The airmen &#8212; a mix of firefighters; engineers; heating, ventilation, air-conditioning system experts; and readiness and operations troops &#8212; left in early September for Alial-Salem Air Base in northern Kuwait. They were tagged to deploy as part of an Aerospace Expeditionary Force cycle in support of the ongoing war on terrorism.

Senior Airman Ellis Cobb, 23, an electrician, said the best part about being back was &#8220;we don&#8217;t have to work for two weeks.&#8221; The returning airmen earned two weeks of leave for their time downrange.

For Cobb, the Kuwait deployment followed a previous one to Tallil Air Base, Iraq.

But that&#8217;s what Cobb&#8217;s buddy, Airman 1st Class Antonio Marsh, 19, was prepared for. Kuwait was his maiden deployment: &#8220;I thought I was going to be on the front lines, with weapons in my hand, taking care of the enemy. It was completely different. We just got out there to do our jobs to build the base into a better condition.&#8221;

Airman 1st Class Ebonni Brooks, 25, a civil engineer readiness apprentice, grinned as she described her first deployment since, she said, it was so much better than she expected.

&#8220;I had a really good time. The friendships and the lessons learned over there far outweighed what I imagined,&#8221; she said.

Though she felt safe, Brooks said she continually reminded herself to stay alert.