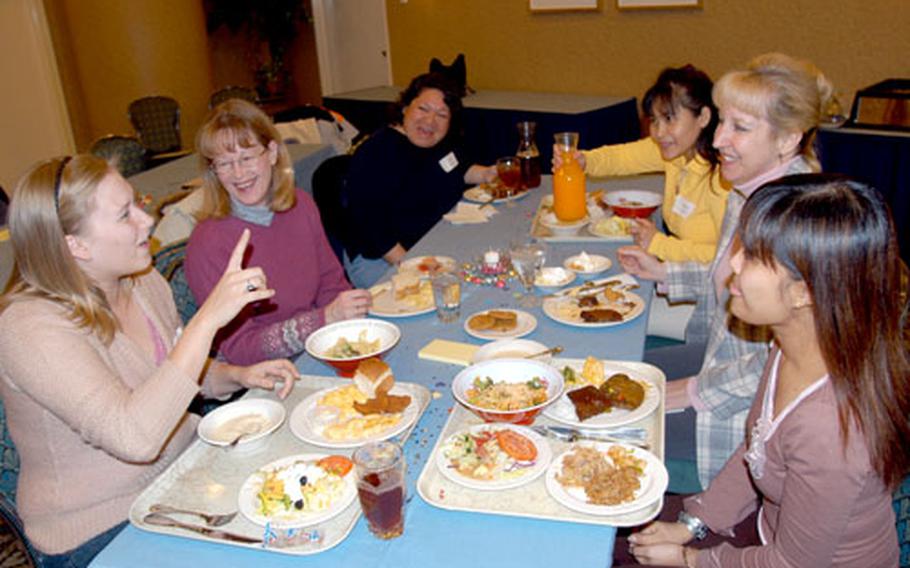 MISAWA AIR BASE, Japan &#8212; Two months into her husband&#8217;s first assignment, Barbara Max is learning that despite coming from an Air Force family, she still has much to learn about military life.

Max and 13 other wives of airmen, sailors and civilians at Misawa attended the six-hour orientation class Friday at the Tohoku Enlisted Club, where they brushed up on military jargon, protocol and etiquette and learned what base services are available to help with an array of needs, from financial to legal.

&#8220;It&#8217;s to let them know how the military works; otherwise it can seem overwhelming and confusing,&#8221; said Rochelle Phelps, a family advocacy outreach manager.

Heartlink at Misawa is part of the Air Force&#8217;s integrated delivery system. The first class was held in January 2003 and is offered every four months to spouses of servicemembers, civilians and contractors new to the military way of life, organizers said.

&#8220;Part of it is just understanding how the military functions,&#8221; said Anne Turnbull, Family Support Center community readiness technician. &#8220;When you have active-duty folks working 12- and 14-hour shifts, understanding the mission of the military and what drives that mission &#8230; it&#8217;s generally much easier for them to be flexible with the hours the spouse spends away from home.&#8221;

The spouses also reviewed how to prepare for a Noncombatant Evacuation Order and how to decipher a military leave and earnings statement. But the best guidance may have come from seasoned military spouses.

Natalie Bilger said she felt fortunate that her husband, Senior Airman Joseph Bilger, had yet to deploy five years into his Air Force career. When Bilger noted that she hadn&#8217;t seen her family in more than a year, Weckhorst said: &#8220;You&#8217;ll find, too, that the military, they can become your family.&#8221;