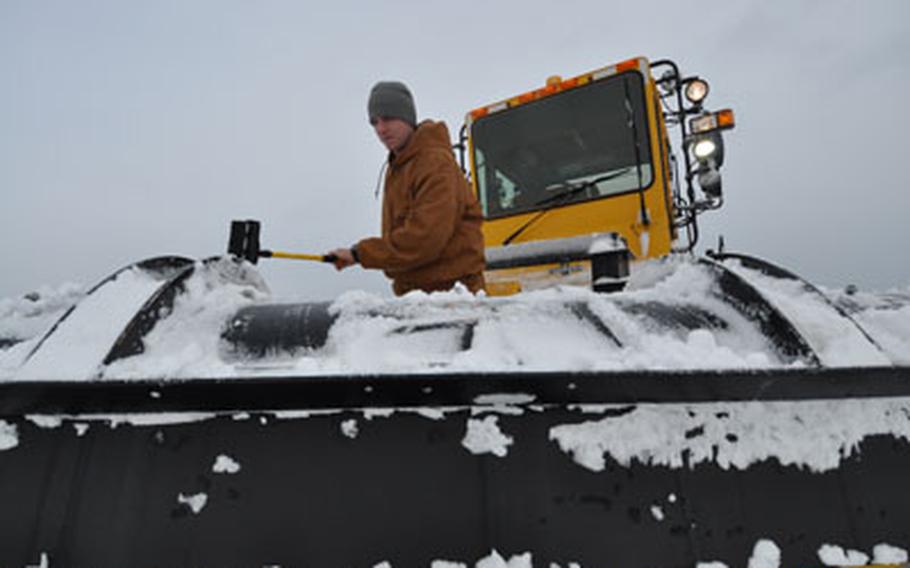 Buy Photo
Staff Sgt. Matthew Fenton clears snow of the plow he was using to clear the air field on Wednesday morning following 14 inches of overnight snow at Misawa Air Base, Japan. (T.D. Flack/Stars and Stripes)

Buy Photo
Staff Sgt. Matthew Fenton clears snow of the plow he was using to clear the air field on Wednesday morning following 14 inches of overnight snow at Misawa Air Base, Japan. (T.D. Flack/Stars and Stripes) 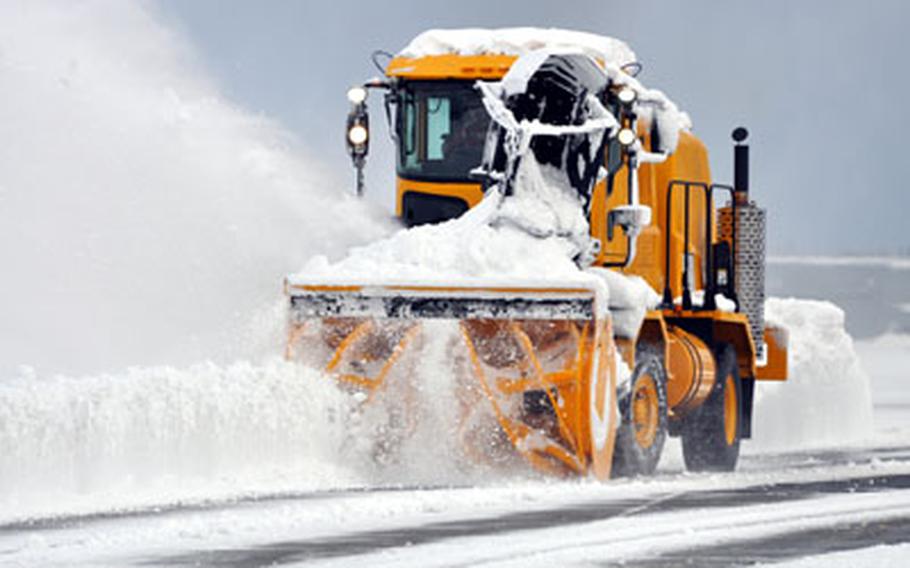 MISAWA AIR BASE, Japan &#8212; Last week&#8217;s heavy snows were the first big challenge this winter for workers tasked with keeping the pavement clear at Misawa.

"We&#8217;re making do, getting everything cleared out," Tech. Sgt. Thaddeus Mitcham said Wednesday during a break from clearing snow off the flight line.

Misawa was hit with a little more than 14 inches of snow between Tuesday afternoon and Wednesday morning, with drifts in some areas of the airfield as high as 10 feet.

Mitcham, the noncommissioned officer in charge of the 35th Civil Engineer Squadron&#8217;s heavy equipment section, runs most of the snow-clearing operations on Misawa.

He has a fleet of 112 vehicles, about 115 Japanese employees and 32 airmen who have the vitally important job of keeping the airfield open. He said the snow removal budget is $1.8 million for the year.

The Japan Air Self-Defense Force personnel who share the base take full responsibility for keeping the actual runway clear.

But that still leaves Mitcham&#8217;s crew with 413 acres of airfield pavement, 70 miles of base roadways, 130 miles of sidewalks and 247 acres of parking areas on the base.

"All wintertime, we&#8217;re doing snow removal," he said during an interview at his headquarters.

The heavy repair section focuses on grass cutting, fence repair and pavement repair during the summer. But from Nov. 15 to April 1, crews focus on dark snow clouds rolling across the horizon.

"The whole goal of this is continuous bare pavement for the airfield," Mitcham said. His section works closely with base operations to help prioritize which areas must be cleared first, based on the squadron&#8217;s flying schedules.

And it can get hectic. Last year, Mitcham said, the base was hit with 38 inches of snow in about 28 hours.

"When it comes like that, it gets pretty crazy," he said.

He said that even during the heaviest snows, his crews can open a path for a plane to take off by running the plows, followed by the brooms, and then a truck dispensing an expensive de-icing chemical.

"It will give them about a 10-minute window for the jets to get out," he said. "And then we can do the same thing when they come back."