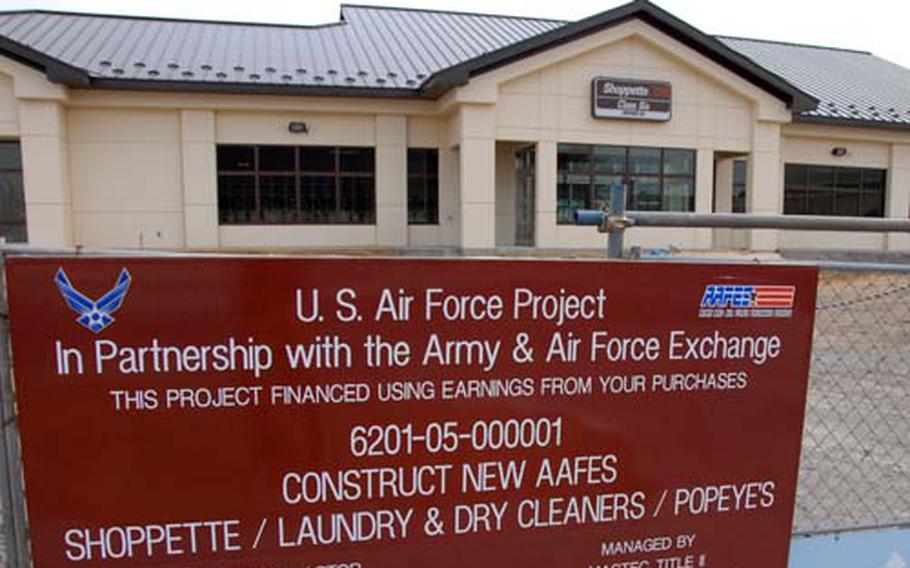 Army and Air Force Exchange Services officials say this $10.5 million shoppette facility – the biggest in the Pacific at 13,670-square-feet – will open on June 1 at Misawa Air Base, Japan. (T.D. Flack / S&S)

The delays were caused by "unforeseen circumstances" when it came to some of the excavation work at the project, said Anna C. Iosefo, AAFES general manager at Misawa.

She said safety, fire, quality assurance and other inspections begin next week, and goods that will fill the shelves, coolers and freezers are already on order.

The building will house a 9,100-square-foot shoppette, a laundry and dry cleaning salon and Popeye&#8217;s Chicken with a drive-thru.

With 24 coolers, 10 freezers and nearly 30 percent more floor space than the existing shoppette, it will offer a larger variety of goods and more stock, she said. The building also will have an indoor ATM.

And it&#8217;s about time for an AAFES-funded grand opening on base, Iosefo said.

It&#8217;s been 23 years since AAFES opened new buildings at Misawa &#8212; the exchange and dry cleaners both opened in 1986. And the building housing the current shoppette was actually opened in 1949. It&#8217;s also been a base library and a club over the years.

Iosefo said the plan is to keep the current hours of 6 a.m. to midnight, but that customer usage rates will be tracked closely. If community need calls for it, the new shoppette could be open 24 hours a day, she said.