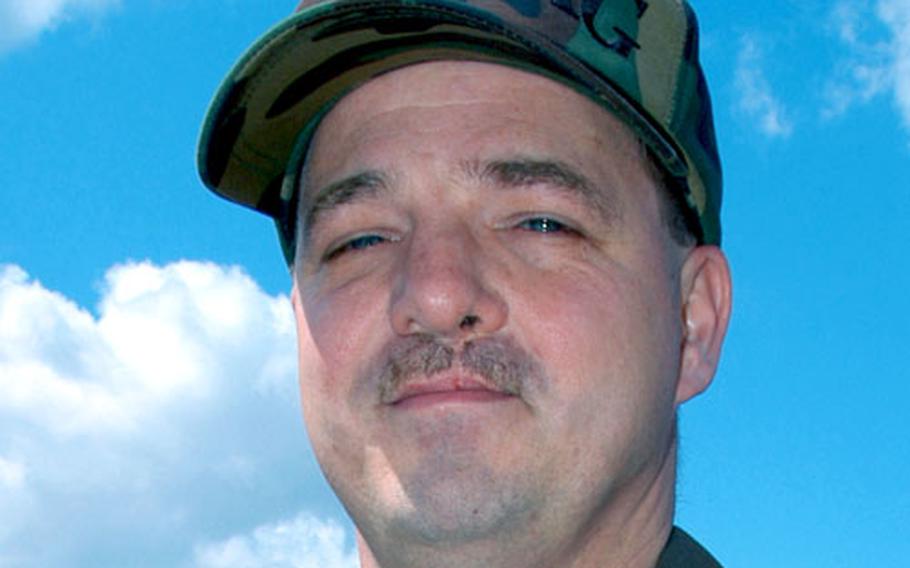 Master Sgt. Richard Robinson used his Air Force training to save the life of Master Sgt. Mike Ward after a motorcross accident near Misawa Air Base, Japan. “It was comforting to know I knew what to do, but it was scary at the same time,” Robinson said. (Jennifer H. Svan / S&S)

MISAWA AIR BASE, Japan &#8212; After the accident, Master Sgt. Richard Robinson walked from the jump to the fresh helmet paint marks in the dirt. He counted 45 paces.

It happened to Master Sgt. Mike Ward two weeks ago at a tricky spot along the off-base Misawa area motorcross course.

&#8220;He was right in the face of a jump and he shot off that thing,&#8221; said Robinson, who was riding behind Ward. Both are assigned to Misawa Air Base.

Ward tore two ligaments in his pelvis &#8212; including one that connects the pelvis to the spine &#8212; in the wreck and faces a long road to recovery that may or may not include a continuation of his Air Force career, depending on how he mends. But he may owe his life to his friend, who relied on his military training in cardiopulmonary resuscitation and self-aid buddy care to act quickly and decisively in a panic-stricken situation.

Robinson said he knew Ward was in bad shape. His body was twisted, crumpled, lifeless, his face a bluish-green.

Ward had a pulse. But when Robinson put his hand under his friend&#8217;s helmet visor and over his mouth, he couldn&#8217;t detect a breath.

As he unbuckled Ward&#8217;s helmet, Robinson heard a light gurgle and saw blood. It sounded like his breathing was blocked, so Robinson carefully repositioned him to try to open his airway, he said, &#8220;and he started breathing on his own.&#8221;

Several other Misawa airmen at the motorcross course, in the meantime, called for help, including Tech. Sgt. Chris Whipple, who speaks Japanese fluently and got local nationals at the site to call an ambulance. The group also kept Ward stabilized, coaxing him against his wishes not to stand up, a move that may have further damaged his pelvis, officials said.

As of Thursday, Ward still was hospitalized in Hachinohe and could not be reached for comment. Through his wife he passed along his thanks to everyone who helped him.

Robinson, 39, the chief inspector for the 35th Maintenance Group, said he never expected he&#8217;d use his Air Force life-saving training on a friend at a dirt-bike course. He said Ward, 44, was a seasoned rider wearing all the right protective gear.

His instructor, Tech. Sgt. Cory Mayberry, the chief of development and instruction for the 35th Maintenance Group, said airmen in the maintenance group must complete CPR and self-aid buddy care training every two years. The courses are redundant in some areas, but that only reinforces the material, Mayberry said.