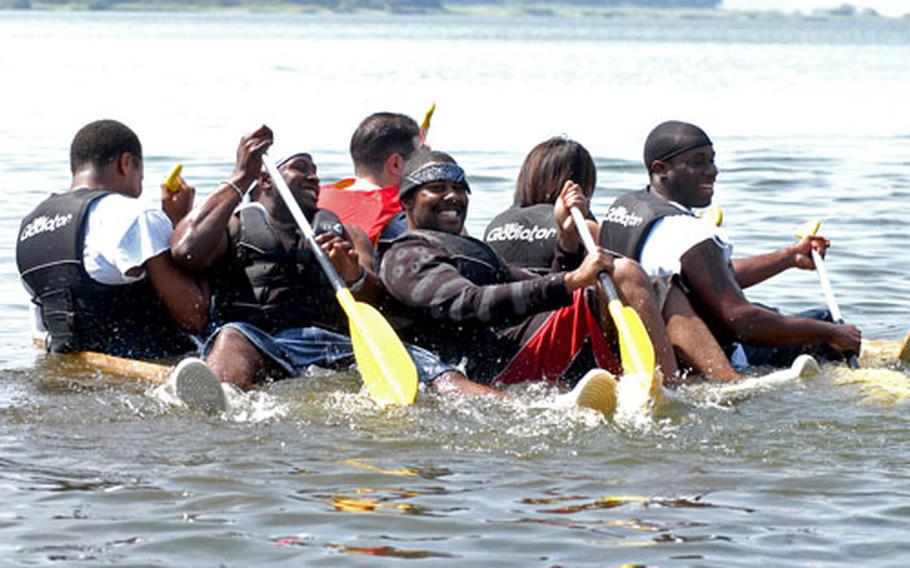 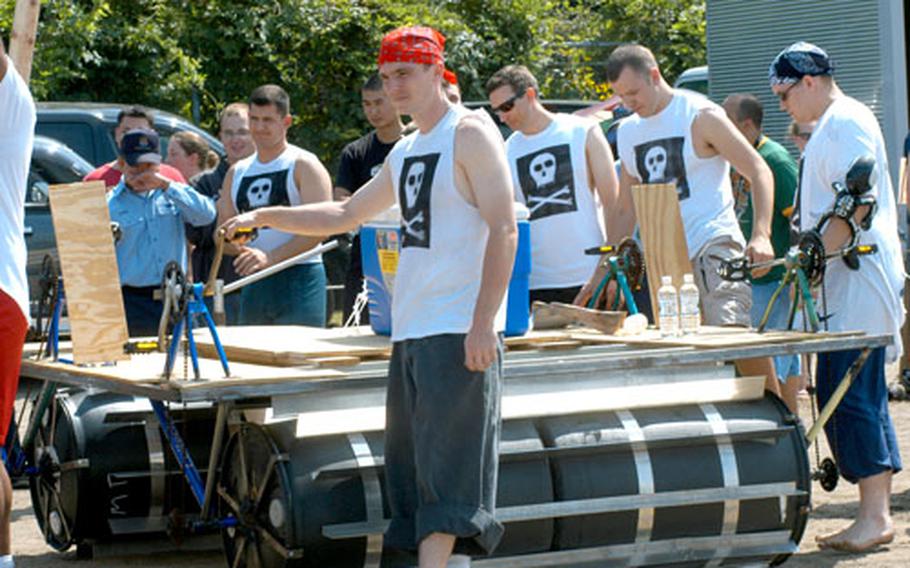 The Aircraft Intermediate Maintenance Department (500 division) team’s “The Rum Runner” won most innovative boat for its use of bicycle pedals and other parts — but the metal-laden vessel sank Thursday. (Jennifer H. Svan / S&S) 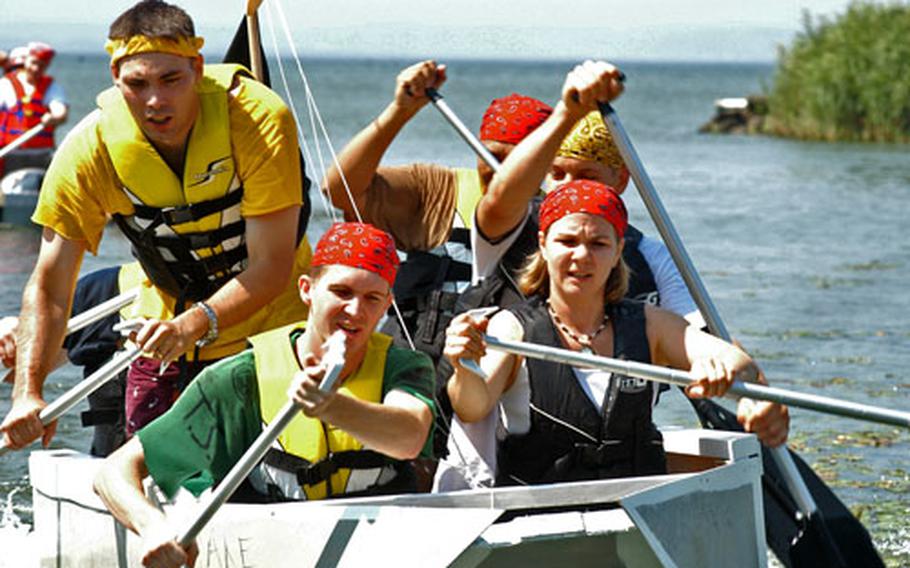 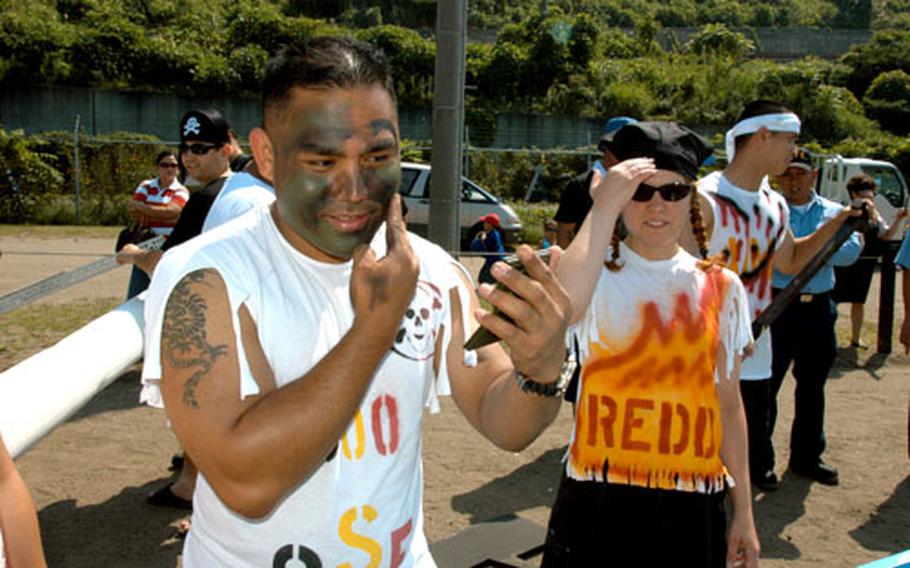 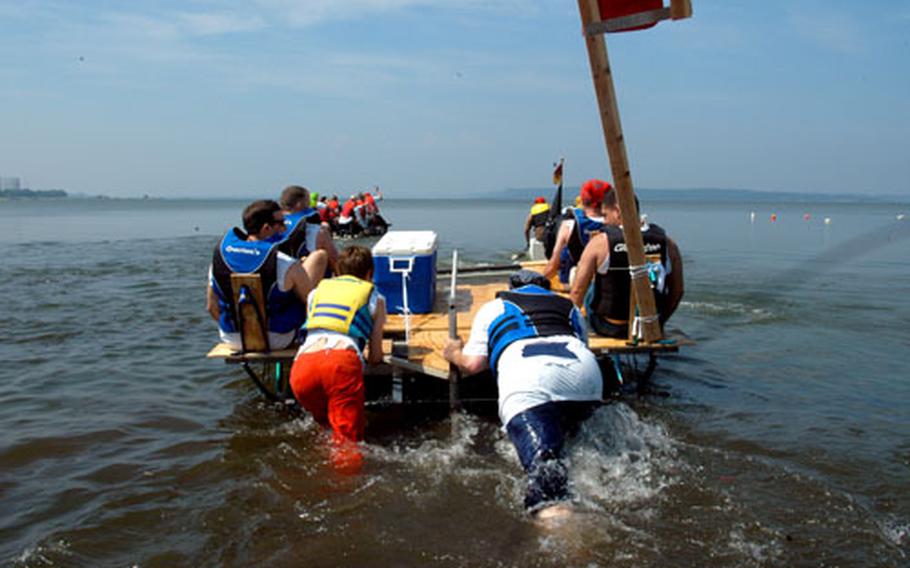 A team from the Aircraft Intermediate Maintenance Department try to get their bicycle-pedal-powered pontoon moving. Though voted most innovative, the metal-laden boat wasn&#39;t very buoyant. (Jennifer H. Svan / S&S)

But so did the one deemed &#8220;most innovative,&#8221; which featured bicycle pedals propelling finned barrels nowhere fast.

And the vessel taking &#8220;best overall,&#8221; entered by the returning champs? It failed to reach the finals after getting turned around in murky Lake Ogawara in a preliminary heat.

The Navy&#8217;s boat regatta at Misawa was full of surprises Thursday.

Ten six-sailor teams from various departments and commands competed for bragging rights and a big trophy in a Misawa Navy tradition aimed at fostering teamwork and camaraderie among sailors.

Each team had to enter a watercraft built from scratch &#8212; one that ideally could float and navigate the roughly 200-meter course in the lake&#8217;s shallows off the base beach. Materials could not be from a boat nor could vessels be motorized.

Teams had to hoist flags and they could sabotage each other with water guns and water balloons, said Lt. Shane Thomas, an NAF supply officer and the regatta commodore, dressed in pirate garb Thursday, adding paddle fights were outlawed.

Boats ran the gamut from a piece of plywood tied to an air mattress to one styled after a Guamanian fishing vessel. Sailors pinned their buoyancy hopes on water jugs and shelving parts, bubble wrap and bamboo, duct tape and glue, wood and barrels.

A team from the Aircraft Intermediate Maintenance Department confidently plopped its pedaled-powered pontoon, &#8220;The Rum Runner,&#8221; on the beach before the race. Other sailors stopped to look, commenting that the team had a clever design.

The bike parts &#8212; everything except handlebars and seats &#8212; came from the Navy barracks, which was getting rid of unclaimed, abandoned bicycles.

Shirley&#8217;s team pieced together the boat over almost three weeks, finishing at 7 p.m. on the eve of the regatta, leaving no time for a trial run.

The team from Command Task Force 72 also was optimistic, even after its contestant was named most likely to sink.