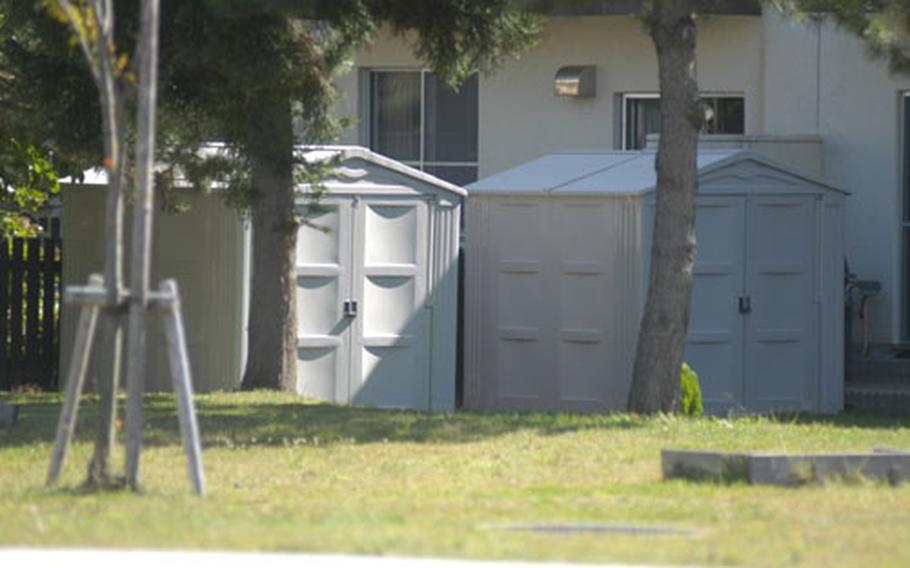 As of Sept. 1, only plastic or metal storage sheds are authorized for housing residents at Misawa Air Base, Japan. At least 400 units on base had to replace locally-bought tarpaulin sheds since January to conform to the new requirement. (Jennifer H. Svan / S&S)

MISAWA AIR BASE, Japan &#8212; In the name of aesthetics, tarpaulin sheds now are banned at this northern Japan base.

Base residents had until Sept. 1 to rid their yard of the green, plastic-tarp storage bins after base officials announced the policy change almost a year ago, in October, and notified residents through correspondence, housing newsletters and other means.

Ten housing residents were ticketed after the deadline for not removing their tarpaulin sheds, Maharrey said. All since have replaced the tarps with approved plastic or metal storage sheds sold at the base exchange or at local hardware stores, he added. The green fabric covers were an eyesore, Maharrey said; after enduring Misawa&#8217;s wet, windy winters, many had frayed edges or holes.

The approved sheds cost more than the tarpaulin: A green fabric shed at a local hardware store was priced this week at 8,800 yen (about $78), while storage sheds through the Army and Air Force Exchange Service at Misawa run from about $125 to $565, depending on size and type. Approved sheds also are sold off base, though they&#8217;re a bit more expensive than those sold by AAFES.

Anyone who puts up a tarpaulin shed will receive a housing infraction, base officials said; three can lead to removal from base.

Maharrey said the unsightly tarpaulin sheds have been an issue for years but &#8220;there wasn&#8217;t a suitable substitute. Now that shed qualities have gotten there, this is where we need to be. It&#8217;s a little bit painful to make that transition, but we did and I thank everyone for their support.&#8221;

The commander noted that two-bedroom houses at Misawa soon will get outdoor storage facilities. They&#8217;re the only housing units with yards at Misawa that lack built-in exterior storage, Maharrey said. The project is to start this year.