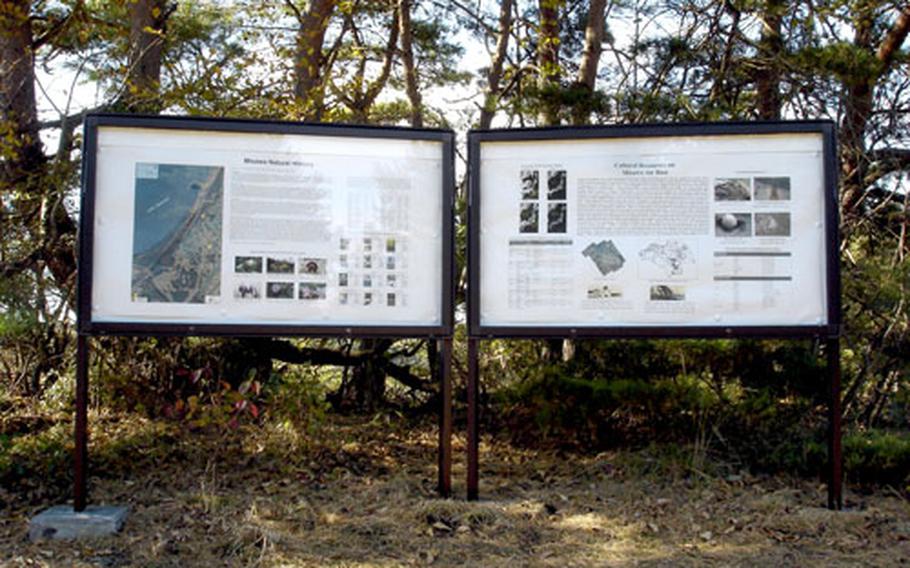 Away from the noisy flight line, concrete offices and shops and high-rise towers is a 1.24-mile meandering path through a pocket of quiet forest. Japanese wild ginger, chocolate vine and fragrant snowbells grow amid oak, walnut and bamboo. Raspberry and gooseberry appear seasonally, and trillium, a rare orchid, dots the marshy wetland in summer.

At least 80 different trees and plants flourish along Misawa&#8217;s own nature trail, one of the base&#8217;s best-kept secrets and, until recently, forgotten treasures.

A university biology professor, a Japanese botanist, Boy Scouts and base officials from several agencies joined to spruce up the footpath, replacing bridges, clearing overgrowth and identifying and signing the diverse flora.

The trail starts in a dwarf bamboo thicket between the base ski lodge and Davy Jones Locker and cuts through a secondary forest near Lake Ogawara, ending near the base beach.

Though it&#8217;s not known how long the trail has existed and who blazed it &#8212; some say it was the Boy Scouts years ago &#8212; the Scouts recently, in cooperation with Outdoor Recreation, which manages the area, have worked to make the trail more accessible to hikers.

Klock&#8217;s botany students brought guidebooks to identify vegetation. It was an ideal field trip, a few minutes down the road from the classroom. Stumped by a few plant names, Klock checked with 35th Civil Engineering Squadron&#8217;s Environmental Flight to see if their experts could help. They did, agreeing to fund a signage project to label the flora.

&#8220;We wanted to do something beneficial for this community and to promote educational awareness of the base&#8217;s abundant natural and horticultural resources,&#8221; said environmental technician Takeshi Ukon, the lead project coordinator.

A Japanese botanist was enlisted. Three months later, trees and plants along the trail were tagged. About 77 small wooden placards were made, displaying each species&#8217; photograph and its Latin, English and Japanese names.

Members of Boy Scout Troop No. 14, led by Kraig Robinson as part of an Eagle Scout project, assisted with tacking up the signs several weeks ago. The Boy Scouts last year also replaced three rotting bridges along the trail as part of Lucas Duraccio&#8217;s Eagle Scout project, according to Nicholson, who noted the Scouts frequently use the area for orienteering and plant identification merit badges. Last summer, the Scouts also cleared overgrowth from the path.

That old, fallen sign Klock spoke of was replaced by two large signboards posted at the trailhead, listing interesting tidbits about the trail &#8212; &#8220;the young stem of the fuki plant is edible&#8221; &#8212; as well as describing other natural and cultural resources found on base. That&#8217;s where you&#8217;ll also find Emerson&#8217;s prose.

The trail is open now, though it&#8217;s typically concealed by snow five months of the year.