Misawa's Potter gym is getting a makeover 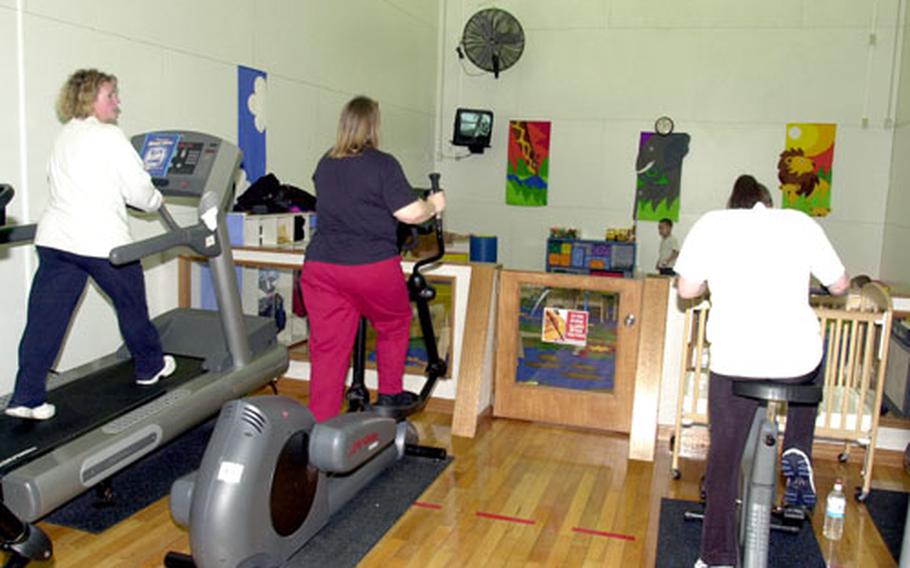 Misawa Air Base moms exercise in the parent-and-toddler room at Potter Fitness Center on Wednesday. The room is one of several that will close for several weeks starting Monday while lights are replaced. (Jennifer H. Svan / S&S)

MISAWA AIR BASE, Japan &#8212; Gone are the days when hefting iron in Potter Fitness Center felt like working out in a dungeon.

In the past 18 months, more than $700,000 in improvements and new equipment have transformed the central fitness hub into a user-friendly gymnasium rivaling some of the best in Pacific Air Forces.

Light fixtures in the center&#8217;s two gymnasiums as well as the aerobics, dojo and parent-and-toddler rooms will be replaced this month. And in February, a project which may temporarily inconvenience some gym rats but perk up the place.

The new lights will be &#8220;a lot brighter, but with not as much direct light,&#8221; said Tech. Sgt. Gerald Cataldo, noncommissioned-officer-in-charge of fitness operations. Of the current lights, he added: &#8220;when you look at them, you get blind.&#8221;

The annex gymnasium will be closed Monday through Jan. 25, Cataldo said. The main gym will be off-limits from Jan. 26 through Feb. 27, during which time it will receive new lights and a paint job.

The aerobics, dojo and parent-and-toddler rooms also will be closed from Monday through Jan. 31.

Units that hold physical training in either the gymnasium or the aerobics room will have to find another facility to work out in during the interim, Cataldo said.

The indoor running track upstairs in the Japan Air Self-Defense Forces&#8217; gym is another possible venue, he noted.

Cataldo estimated about 17 units use the fitness center for group training.

Starting Monday, aerobics classes will be held at the Freedom Fitness Center on the north side of base, while martial arts students will practice in Mokuteki Community Center.

Mothers and fathers who use the parent-and-toddler room will have to make other plans for their workouts.

In the near future, parents and tots will have the option of going to Freedom Fitness Center, where there are plans to make a second parent-and-toddler room, Cataldo said.

Evelie Wymer, wife of a Misawa servicemember, said another parent-and-toddler room is needed.

When her husband is away on temporary duty, &#8220;it&#8217;s just the only way you can get a workout in,&#8221; she said, while walking on a treadmill and watching 3-year-old Maartje romp in the gated play room.

The past and current improvements are funded through PACAF, Cataldo said, giving credit to 35th Fighter Wing and base commander Brig. Gen. Dana Atkins.

When the new lights are turned on, the fitness center staff hopes to tackle the locker rooms.

The present lockers are too bulky and the gym needs more of them, he said.

Gym patrons, though, have few complaints about the center, which now features more than 48 pieces of new equipment, bright walls, more space and televisions hooked into cardio machines&#8217; headphone sets.