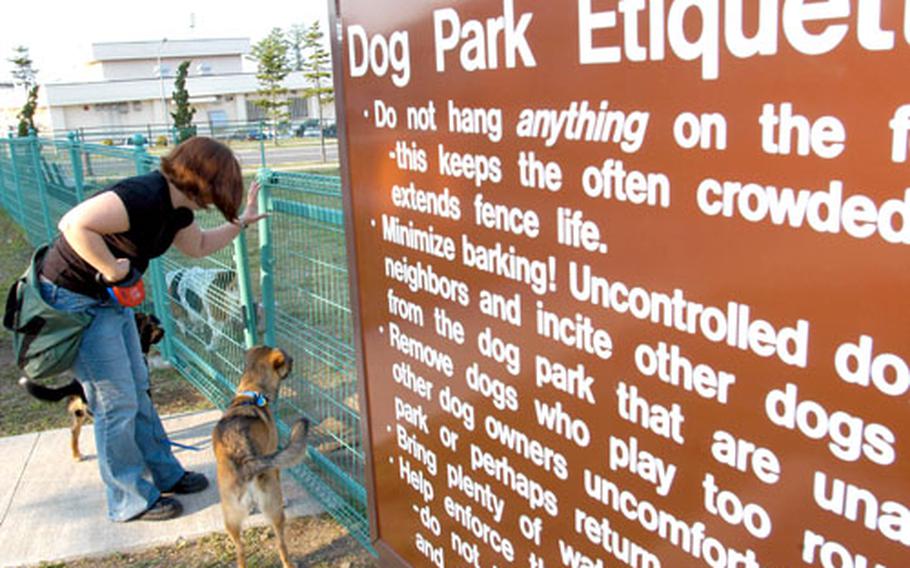 A woman at Misawa Air Base, Japan, lets her dogs into the new “doggy park” in the main base housing area. Dogs are allowed to run inside the fenced-in area without a leash as long as they are made to follow posted rules. (Jennifer H. Svan / S&S)

A woman at Misawa Air Base, Japan, lets her dogs into the new “doggy park” in the main base housing area. Dogs are allowed to run inside the fenced-in area without a leash as long as they are made to follow posted rules. (Jennifer H. Svan / S&S) 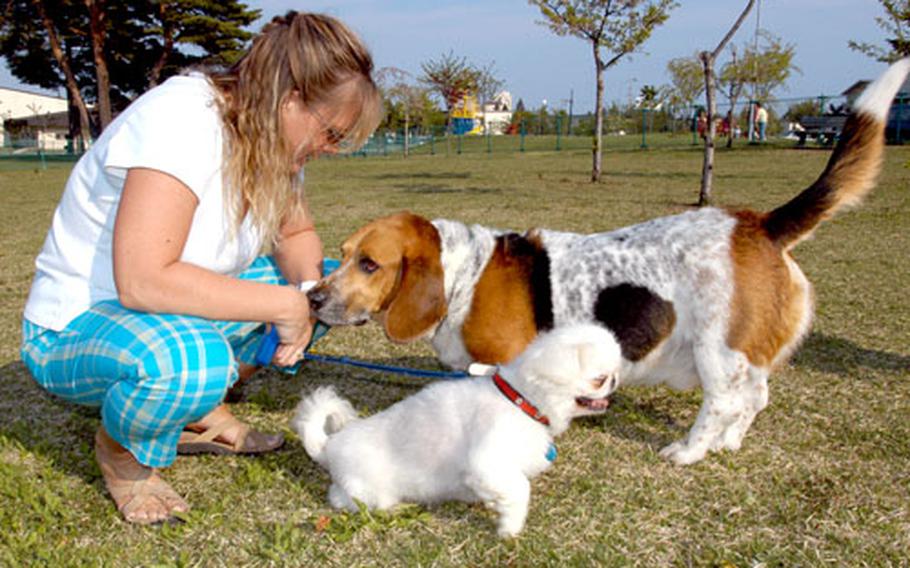 Sherri Pendleton, an Air Force spouse, talks to “Bandit” the bassett hound while keeping her Pekinese on a leash in Misawa Air Base’s new dog park. Though “Lulu” is free to walk around the park without a leash, Pendleton said she doesn’t get along with other dogs. (Jennifer H. Svan / S&S)

MISAWA AIR BASE, Japan &#8212; It&#8217;s arguably the most sniffed spread of grass and dirt on main base, a fenced-in field where canines can run, play and mark their territory without a leash.

But people and their hounds have been using the area for about five weeks, ever since it was enclosed, said Navy Lt. Alan Flanigan, the flight surgeon for Naval Air Facility Misawa and proud owner of three dogs.

Flanigan said he&#8217;s been pushing for a dog park for two years.

After trying other channels, Flanigan suggested the park to the former 35th Fighter Wing commander, Brig. Gen. Bill Rew, at a town hall meeting last spring. At the time, officials were seeking input on how to spend $500,000 the base earned for being a commander-in-chief&#8217;s installation excellence finalist. (Misawa that year went on to win the $1 million award.)

&#8220;He had two dogs. He was very receptive,&#8221; Flanigan said of Rew, noting that current wing commander, Brig. Gen. Sam Angelella, is also a dog owner.

The money to fence in the dog park came from housing funds, according to Lt. Col. Dave Maharrey, 35th Civil Engineer Squadron commander, since the park is in a housing area. Maharrey said he didn&#8217;t know the exact project cost but it didn&#8217;t exceed $2,000. The park already had a fence around the perimeter; civil engineer personnel had to add less than 100 feet of fence and a gate between the field and the children&#8217;s park.

His only concern is the proximity to the children&#8217;s playground.

On Tuesday afternoon after 4 p.m., about six dogs of different breeds ran around the park.

Chanelle Underwood brings her bassett hound, Bandit, to the park every day after school.