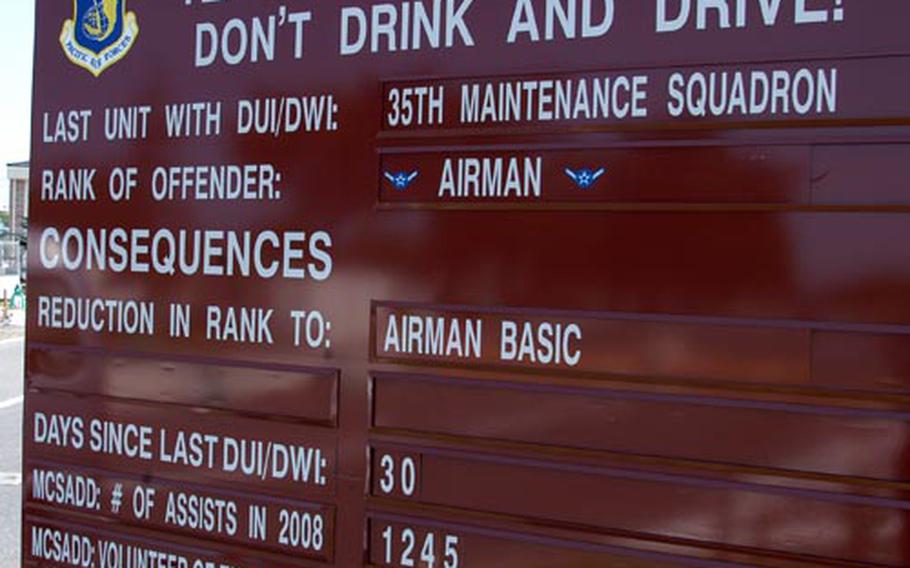 A new sign inside the main gate at Misawa Air Base, Japan, posts more information about incidents involving driving under the influence of alcohol, including the consequences of such behavior. Misawa is stepping up DUI prevention efforts, even as DUIs remain down on the installation. (Jennifer H. Svan / S&S)

A new sign inside the main gate at Misawa Air Base, Japan, posts more information about incidents involving driving under the influence of alcohol, including the consequences of such behavior. Misawa is stepping up DUI prevention efforts, even as DUIs remain down on the installation. (Jennifer H. Svan / S&S) 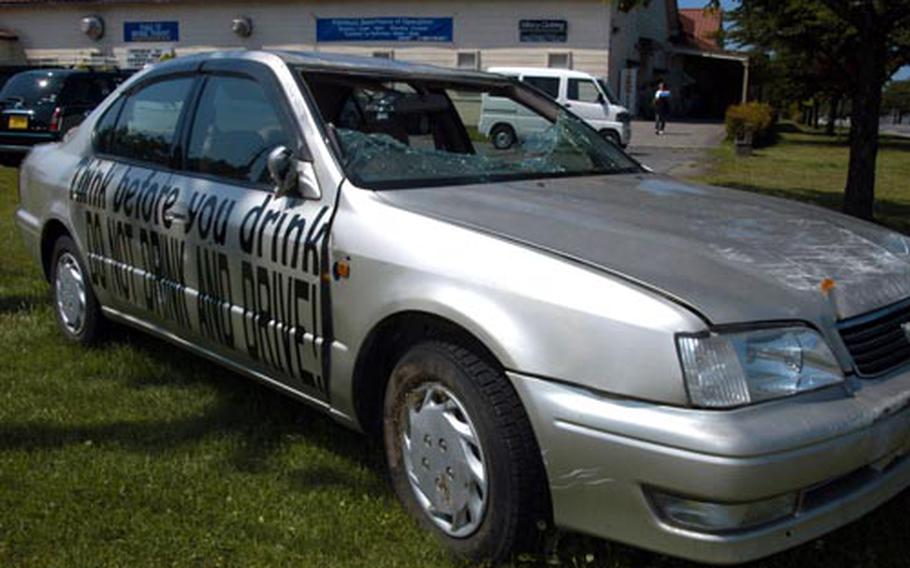 A car rolled by an airman in May and on public display at Misawa Air Base, Japan, serves as a strong reminder of the consequences of drinking and driving. (Jennifer H. Svan / S&S)

In the Pacific, a number of military bases use one &#8212; a sign posted in a visible location that displays statistics such as the unit with the most recent DUI and the number of days since the last incident of driving under the influence of alcohol.

Misawa has beefed up its anti-DUI sign with a new piece of information: "Consequences."

Anyone driving out the main gate can read that an airman with the 35th Maintenance Squadron was reduced in rank to airman basic for a DUI more than 30 days ago.

"Our young airmen told us &#8216;We hear about incidents but we don&#8217;t ever see what the consequences are,&#8217;&#8197;" said 35th Fighter Wing Command Chief Master Sgt. Ricky Price. "The sign there is a deterrent and for education purposes. Our airmen have asked for awareness of what&#8217;s going on."

Misawa has seen a decline in DUIs over the past three years: In 2006, there were 28, followed by 15 in 2007, and five so far this year, according to base statistics.

"We&#8217;re striving for none, that&#8217;s our goal," Price said. "Any alcohol-related incident is a cause for concern because it can hurt our relationship downtown."

Toward that end, Misawa has stepped up prevention efforts in other areas.

A banged-up car with a broken windshield is parked on the lawn outside the Army and Air Force Exchange Service furniture store. Painted across the doors in black bold letters is a warning: "Think before you drink. Do not drink and drive."

An airman rolled the car in May and suggested the display.

The base also is handing out key chains with phone numbers for transportation services, such as Misawa Community and Services Against Drunk Driving (McSADD) and taxis.

McSADD, staffed by volunteer drivers who provide free and anonymous rides home to anyone in need, also is getting some recognition.

"We&#8217;re not here to humiliate anyone," Price said, when asked if the offender is responsible for updating the sign.

But at Andersen Air Force Base, Guam, airmen who are punished for an alcohol incident must manually update two signs daily, according to base officials.

The message is whether "you&#8217;re behind the wheel or not, you still need to drink responsibly," said Andersen spokesman Tech. Sgt. Brian Bahret.

Stars and Stripes reporter Teri Weaver contributed to this story.