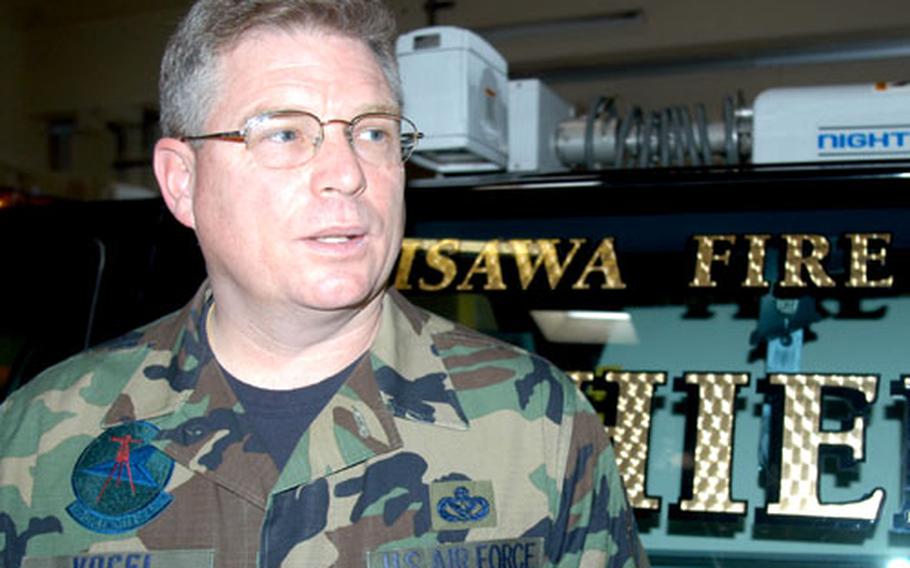 MISAWA AIR BASE, Japan &#8212; Years ago, stories of fighting fires lit a spark in a little boy who grew up to be an Air Force chief master sergeant.

The father of Dan Vogel&#8217;s childhood buddy was the hometown fire marshal. Vogel hung around their house and heard tales that made him laugh and shudder. He was hooked.

By the time he joined the Air Force at age 20, Vogel had four years of volunteer firefighting experience. Recruiters guaranteed he&#8217;d work in fire protection. That&#8217;s all he needed to hear, because he wanted to ride a truck, not a desk.

Besides, he figured then that Air Force training would improve his marketability to a civilian fire department.

Misawa&#8217;s fire chief will hang up his battle-dress uniform in February after a career spanning three decades. The Air Force took him to more than a dozen bases, three islands and four countries. He met his wife, Katie, while in the service and raised two sons, Greg and Marty, now honors students at the University of Washington. He rose to the top enlisted rank of chief master sergeant after 23 years. All the while, he lived his boyhood dream.

Vogel now has his own stories. He was in South Korea in the early 1980s when a U-2 crashed into a rice paddy near Osan Air Base about 50 yards from an elementary school. The pilot ejected and broke his arm.

He recalls a fire at McChord Air Force Base, Wash., that destroyed a school.

He said the death of a civil engineering airman years ago at Kadena Air Base, Okinawa, affected him most.

&#8220;He was driving a backhoe. It flipped on him, pinned him to the ground, cut him in half,&#8221; Vogel said. &#8220;I was driving the rescue truck. I had to actually hook in my wench and pull this backhoe off of him. We spent an hour and a half with this kid before the ambulance finally got there.

Vogel was drawn to firefighting because &#8220;when you respond to people in need, you are truly needed,&#8221; he said. &#8220;No one else can do what you can at that moment in time and putting all your hard work and training to good use can be extremely rewarding.&#8221;

That protection has improved over the years. Firefighters no longer share helmets or issue used, beat-up bunk gear. &#8220;In the old days, we used whatever air mask was on the truck,&#8221; Vogel said. &#8220;Now each firefighter has his own, fit-tested air mask.&#8221;

That&#8217;s not all that&#8217;s changed since Vogel&#8217;s first assignment at Holloman Air Force Base, N.M., in 1975. Air Force firefighters in operations still pull 24-hour shifts but they have more privacy and better facilities.

&#8220;I&#8217;ve lived in some drafty old dumps where we had open bay bunk rooms and you had to walk across a cold floor to a cold bathroom&#8221; and the pipes dripped, Vogel said. It was 30 beds to a room, just like basic training. There was a dayroom with one television, and an old bench, and weights brought in by one of the guys might be the only fitness equipment.

Though no longer on 24-hour duty, Vogel enjoys the nicer facilities, calling Misawa&#8217;s &#8220;a jewel&#8221; and the best he&#8217;s seen. Sense of community, however, has been sacrificed for privacy, comfort and convenience. Firefighters today sleep in separate rooms, each with a television, telephone and computer access.

And in the age of terrorists and dirty bombs, he said, the job today is more demanding.

Today&#8217;s Air Force firefighters are required to be experts in hazardous materials and weapons of mass destruction. They take on every facet of emergency response from first-aid medical treatment to special rescue missions, Vogel said. If there&#8217;s an injury-causing event on base, they&#8217;re typically first on scene.

It&#8217;s tougher these days to keep good firefighters in the force, Vogel said.

&#8220;They can earn national certifications that will qualify them to get a job anywhere in the downtown community &#8230; and get twice the pay at half the hours,&#8221; he said.

Vogel plans to remain in fire protection or emergency management. He&#8217;s looking at opportunities in both the private and public sectors. He and his wife also plan to travel.

Vogel&#8217;s parting advice to airmen in the infancy of their careers: &#8220;Learn to do your job and do your job well. That will open up a lot of other doors. Everybody looks at their young kids and they look for their superstars &#8230; You may think nobody&#8217;s noticing but they are.&#8221;