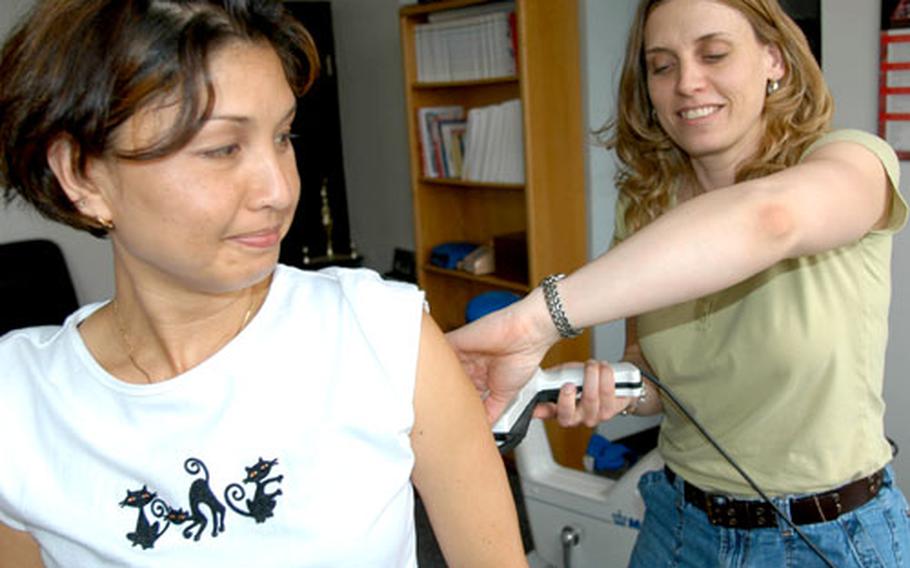 MISAWA AIR BASE, Japan &#8212; In five months, Gina Guzman dropped 47 pounds, shrinking from size 20 to 12-14. She walked, kicked with Tae Bo, rode her bike and counted calories. The greatest thrill was playing football and soccer with her husband and three boys for two hours without tiring. One pair of pants will remind her of her former frame &#8212; the rest are gone.

A number of Misawa base residents share her resolve. This spring, they took part in several weight-loss competitions modeled on the popular NBC show &#8220;The Biggest Loser.&#8221;

For some, money was a big incentive: Senior Airman Timothy Waters, Staff Sgt. Alana White, and military spouses Chad White and Amy Reid took home $2,000 by winning the team portion of 35th Services Squadron&#8217;s eight-week &#8220;Biggest Loser&#8221; challenge. They worked out daily, then upped the ante to twice daily, persevering through challenges including shin splints and pneumonia to lose a combined 141 pounds &#8212; 58 percent of their initial body weight.

But now that there are no more bucks, no more mandatory weigh-ins, the contestants&#8217; biggest challenge may lie ahead: keeping off the weight.

Goals should be realistic and can be as simple as bringing a nutritious &#8220;brown bag&#8221; lunch to work several days a week or increasing water intake, Fox said, adding that people should focus less on the scale and more on maintaining a healthy lifestyle.

Since Feb. 2, the Sollars group of 20 has lost 118.25 pounds, said school nurse Vicki Campbell. Members weighed in weekly, focusing on different monthly goals such as body fat or inches lost. Everyone chipped in a buck a week, an extra dollar for gaining weight. The best losers and maintainers split the pot each month.

But Murphy said she worries about sticking to healthy routines during a summer vacation typically loaded with dinners out, barbecues and home-cooked meals in the States.

Fox said finding &#8220;someone to keep yourself accountable if you find that you&#8217;re slipping back into your old ways&#8221; is important. The HAWC, she said, offers a weight-loss support group open to anybody at 4:30 p.m. Mondays.