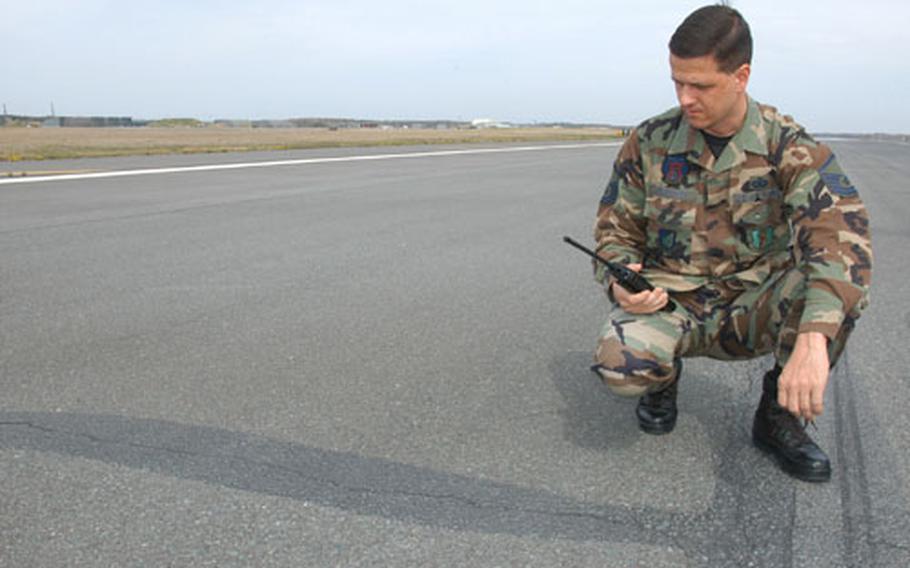 MISAWA AIR BASE, Japan &#8212; The skies over this northern Japanese city will be filled with an eerie quiet for almost 14 days in June when Misawa&#8217;s 10,000-foot runway closes for a $1 million repair project.

No fixed-wing aircraft, which includes most military and all commercial flights, will be able to operate from the base for 12 days in June.

The shutdown marks the fifth time since July 2000 that Misawa has closed its runway for repairs. The upcoming closure is the last and largest of five renovation phases, said Louis Torres, chief of contract element for the 35th Civil Engineering Squadron.

The airstrip&#8217;s non-repaired section is crisscrossed with cracks from years of heavy use by Air Force and Navy aircraft, Japan Air System commercial jets and Japan Air Self-Defense Force planes based at Misawa. Duraccio estimated almost 30,000 flights operate from the base per month.

Torres said the project marks the first time the weathered runway, more than 20 years old, is to receive major repairs.

During the shutdown, Japan Air System will add four daily flights at Aomori Airport, 45 miles northwest of Misawa, according to a Japan Airlines official at the company&#8217;s customer service desk.

Those flights will be suspended June 5-17. At Aomori, JAS will add two additional daily flights to Haneda and one each from Aomori to Osaka and Sapporo.

No Patriot Express flights will be held during the runway closure; the last flight before repairs departs Misawa on the evening of June 4, officials said.

Mail to and from the base is to be trucked from Aomori. Registered mail will not be delivered or received during the closure period because it&#8217;s delivered by military aircraft, officials said.

Local contractor Nippo Construction is to complete the runway repairs, base officials said. The five-phase project has a cost of about $5.5 million; when done, it will have replaced about 7,500 feet of the asphalt airstrip.

During the closure period, some U.S. F-16s will be upgraded elsewhere, Duraccio said, while the Navy&#8217;s P-3 Orion aircraft will operate from an alternate location.