Misawa residents chime in with ideas to improve base life 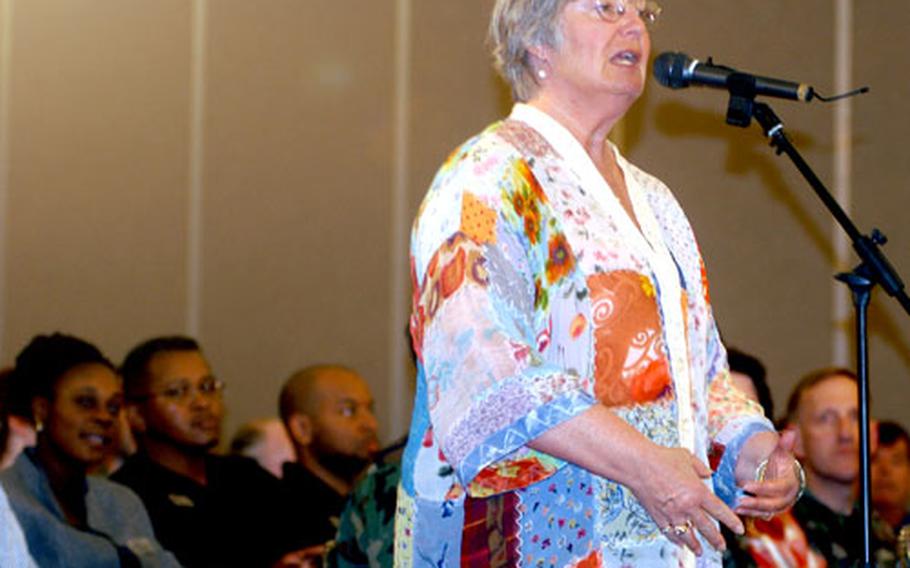 MISAWA AIR BASE, Japan &#8212; Base residents have much on their minds: Wednesday evening, during the two-hour town-hall meeting at Tohoku Enlisted Club, callers and audience members generated a flurry of ideas, from creating a dog park to opening the gas pumps 24 hours a day to credit-card-paying customers.

More than 200 people turned out for the second town hall meeting under Brig. Gen. Bill Rew, 35th Fighter Wing and base commander. With senior leaders, he fielded a steady flow of questions during the televised event.

For the second time, Sollars Elementary School teacher Carol Powell asked whether base officials would consider stocking products of paper, not just Styrofoam, at the General Services Administration (GSA) Mart.

A caller named Danny asked, given that the Army and Air Force Exchange Service buys gas at a fixed, annual price from the government, &#8220;Why are the prices still rising here at Misawa?&#8221; Wayne Hansen, Misawa AAFES store general manager, said the gas-pricing policy will be reviewed at AAFES&#8217;s biannual board meeting in May.

Another caller asked about possibly using pay-at-the-pump after hours. Col. Tom Yanni, 35th Mission Support Group commander, said it may be feasible but officials first must figure how to ensure fuel would be sold only to status-of-forces-agreement personnel, as the SOFA requires.

Several questions were about Misawa&#8217;s Weasel&#8217;s Den, the Air Force&#8217;s largest indoor recreation center, which opened this spring. An audience member asked if the $5 per 5-minute charge to ride the go-carts could be lowered. For families with kids, $5 quickly becomes $20 or $25, the master sergeant said.

Rew said base officials are finding that price is needed to maintain the $5,000 to $6,000 carts. Someone suggested using part of the $500,000 promised to the wing as a finalist in the 2005 Commander in Chief&#8217;s Installation Excellence (CINC) Award to offset the price. Lt. Col. Kari Mostert, 35th Services Squadron commander, said because the go-carts were purchased with nonappropriated dollars, &#8220;we have to use funds generated by use of the carts&#8221; to maintain and repair them.

Another caller asked if base officials would consider establishing a dog park, also with the CINC money.

Rew said several ideas have surfaced for using that money but he wants to hear more. &#8220;This year, in particular, money is tight. &#8230; We really need to prioritize quality-of-life initiatives.&#8221;

Base officials ended Wednesday&#8217;s town hall with questions jotted on a stack of papers about 1.5 inches thick from calls or e-mails. Officials pledged everyone will get a response. Additional questions may be e-mailed to townhall@misawa.af.mil.