Misawa redesign is ties to nearby development 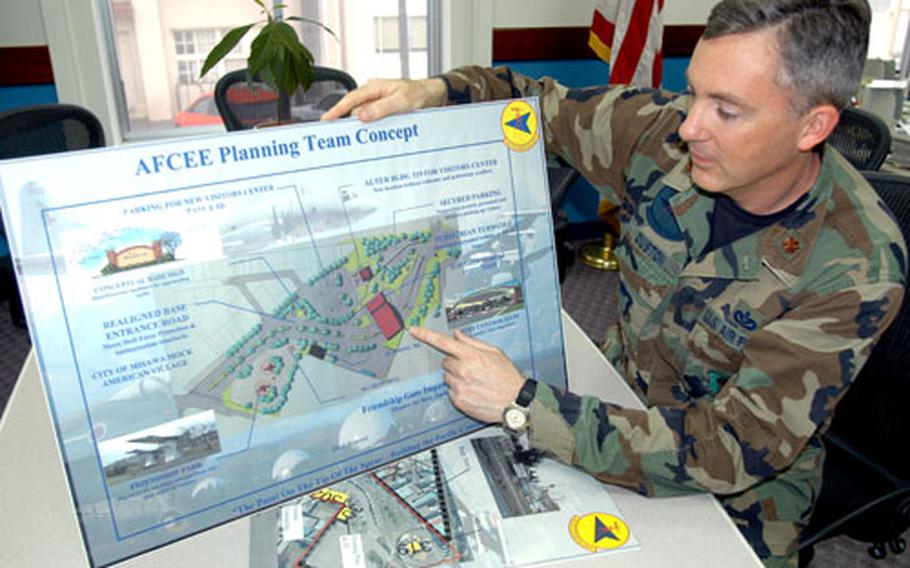 Maj. Mathew Duston, 35th Civil Engineer Squadron Engineering Flight commander, looks at a draft redesign of the area outside Misawa Air Base’s main gate. The base is redesigning the area in part to blend better with a new shopping district the city of Misawa hopes to open in 2008. (Jennifer H. Svan / S&S)

City officials in 1999 approved a funding request from the Japanese government for the American Village project, a new 9.4-acre shopping district to start on the other side of the base&#8217;s main gate and span a section of White Pole Road.

Despite its name, American Village will be designed to appeal to both American and Japanese tastes, including an array &#8220;of shops that deal with goods and food only available in Misawa and also American goods,&#8221; said Yusuke Tachizaki, Misawa City Office&#8217;s Commerce, Industry and Sightseeing Division assistant chief. &#8220;American-style restaurants, franchises and fast-food establishments&#8221; as well as a large outdoor space for festivals and pedestrians to gather also will be part of the village, he said.

Since negotiations with companies still continue, city officials couldn&#8217;t say which businesses might be coming. The city plans to open the village to the public in 2008 with a goal of building friendships between Japanese and Americans.

&#8220;What&#8217;s important is not just construction of this village &#8230; but how well both Americans and Japanese can communicate with each other and that they enjoy this village,&#8221; Tachizaki said.

For its part, the base plans to redesign its property outside the main gate. The city approached base officials in 2005 about redesigning the sidewalk that extends out from the gate, said Maj. Mathew Duston, 35th Civil Engineer Squadron Engineering Flight commander.

Seeing an opportunity to improve the gate area&#8217;s overall appearance, the base paid for a team from the Air Force Center for Environmental Excellence to help with a new design. The resulting plan incorporates several pieces, the first being a brick sidewalk, new lights and possibly benches along the American Village border.

Construction for those projects could start as early as this summer if the base can allocate about $100,000, Duston said.

Other redesign elements include moving the base entryway and curving the road up to the new gate for force-protection reasons.

The visitors&#8217; center also would be relocated to the gate guard shack, since its current location poses traffic and pedestrian concerns, he added. The old contracting building would be demolished to create a new Friendship Park and the new entryway would be covered with an arch to protect gate guards from the weather.

The entire project, estimated to cost $3 million to $4 million, could be completed, &#8220;best-case scenario,&#8221; in three to five years, Duston said, depending on funding availability.

&#8220;Right now, we have very limited construction funds,&#8221; he said, although some of the project could be paid for with anti-terrorism force-protection money.