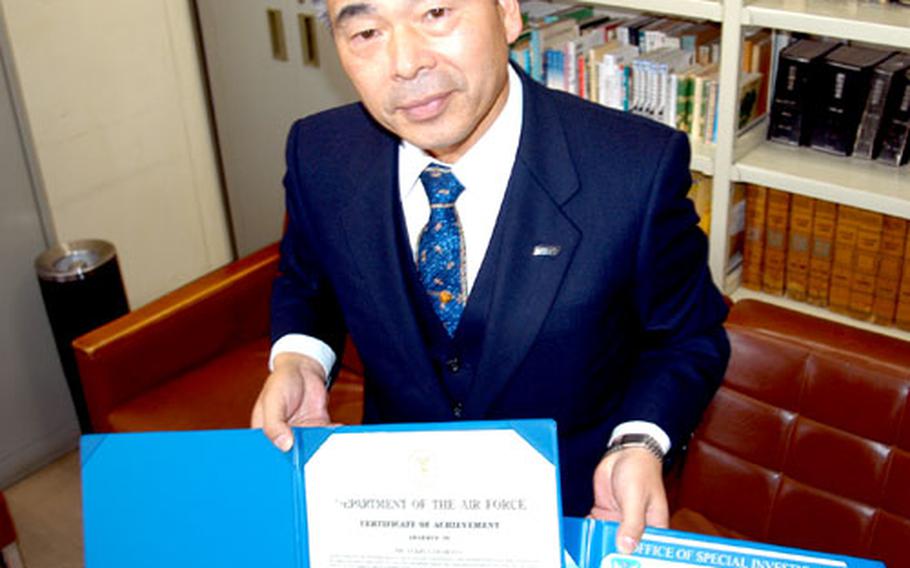 Yukio Yamahata displays certificates of appreciation he received from U.S. Forces Japan and 5th Air Force officials for his work as a liaison officer between Misawa Air Base and Misawa police officials. (Jennifer H. Svan / S&S)

MISAWA, Japan &#8212; During the past three decades, off-base incidents involving U.S. troops at Misawa Air Base, Japan, have changed. Misawa police once kept busy chasing pot smokers; today, traffic accidents and disorderly conduct are more common. Base commanders and police chiefs have come and gone, as have servicemembers and their families.

Not Yukio Yamahata, who retired Thursday after 34 years as liaison officer for the Japanese National Police in Misawa city. As chief translator and mediator between police and the base, Yamahata helped translate and interpret police reports for 35th Security Forces Squadron officials and was the communication link among servicemembers who committed a crime, Japanese police and their victims.

Milner and 35th Mission Support Group Commander Col. Tom Yanni presented Yamahata with tokens of thanks in a recent police station ceremony before 85 of his colleagues. Taking a coffee break during his last day on the job Wednesday, Yamahata beamed at the certificate of appreciation signed by Lt. Gen. Bruce Wright, U.S. Forces Japan and 5th Air Force commander. &#8220;It&#8217;s a great honor for me,&#8221; he said.

Yamahata&#8217;s ties to the base, however, go back much farther. He took his first English-speaking job in 1963, working for the 35th Civil Engineer Squadron. He transferred two years later to the 35th Security Forces Squadron, where he stayed for six years before joining the Misawa police.

&#8220;There were so many marijuana cases involving U.S. servicemembers and their dependents,&#8221; he said of Misawa in the late &#8217;60s and early &#8217;70s. Marijuana plants grew wild outside the base perimeter, although they later were mowed down, Yamahata said. &#8220;One year we interviewed 86 servicemembers and dependents for illegal possession and smoking. That&#8217;s why Misawa police asked me to help out as an interpreter for the investigations.&#8221;

These days, marijuana cases are rare; crimes committed by U.S. servicemembers off base have dropped in the past five years, Yamahata said. Young troops, he thinks, are &#8220;more disciplined&#8221; and base leadership &#8220;gives them good instruction.&#8221;

The veteran police official will continue to use his English skills for the city. He plans to work for the mayor&#8217;s office at Misawa&#8217;s new international center.

Yamahata, who taught himself English and took University of Maryland University College business courses through Misawa, said he still has much to learn about the English language.