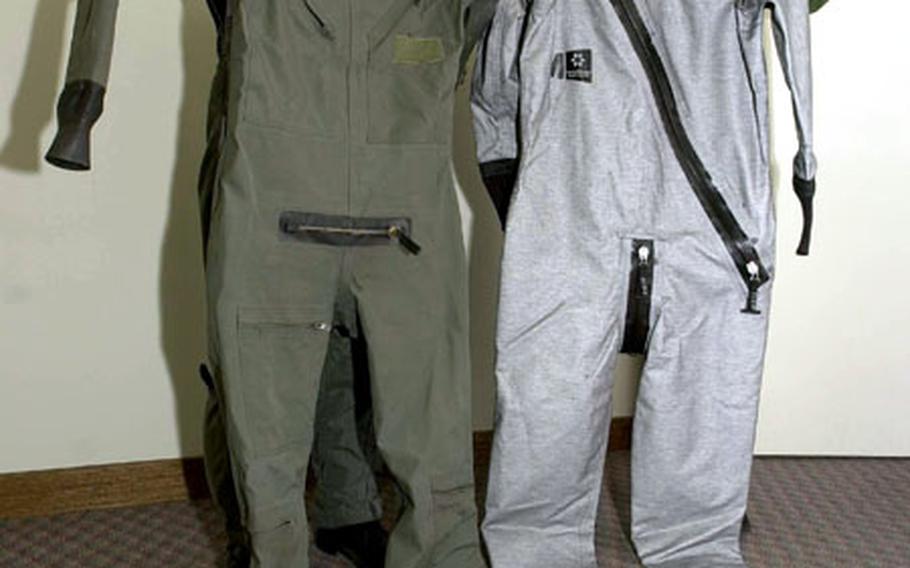 Lt. Col. Luke Grossman, left, holds the current version of an anti-exposure suit pilots to protect them in icy ocean waters if forced to eject from their aircraft. It may be replaced by the silver model held by Master Sgt. William Ryan, life support superintendent for the 35th Operational Support Squadron. F-16 pilots from Misawa Air Base, Japan, could start flight testing the new suits as soon as next week. (Wayne Specht / S&S)

MISAWA AIR BASE, Japan &#8212; Anti-exposure suits worn by F-16 pilots here may not be the most fashionable, but the bulky garments could be lifesavers.

Worn whenever ocean temperatures around northern Honshu dip below 60, the garments offer a better degree of survival should a malfunction require ejecting from a fighter aircraft.

Grossman&#8217;s unit is now testing a new style of suit that could give pilots sitting in the F-16&#8217;s cramped cockpit better comfort levels.

If approved, they could be mandated for Air Force pilots worldwide and would replace model 74-P, used for the past decade.

He said a huge zipper that cuts across the suit&#8217;s upper chest area is among pilots&#8217; biggest gripes.

&#8220;There are newer fibers out there that are more efficient, so we began shopping around,&#8221; Grossman said.

First stop was the Internet. That led to Concorde Aerospace, a company in Hollywood, Fla., that produces a thermal protection suit for cold water.

Grossman said items that could be used for military purposes may be ordered from any source under an Air Force program called &#8220;COTS&#8221; &#8212; commercially-produced off-the-shelf.

The items must be tested so 10 of the exposure suits were ordered.

The neck and cuffs are latex rubber, like scuba diver suits. The rest of the suit is made from four layers of high-performance thermal materials.

He and several pilots tested the first batch of suits by immersing themselves in the base swimming pool, then the 42-degree waters of nearby Lake Ogawara for two hours.

Specialists here track the 60-degree water line as it migrates north and south throughout the year. Ryan said in the dead of winter, ocean temperatures range from 42 to 50 degrees in waters beneath Misawa pilots&#8217; training areas.

Pilots generally stow anti-exposure suits when ocean temperatures off northern Honshu moderate above 60 degrees &#8212; from as early as June until as late as mid-October.

A few Misawa pilots flew with the new suits for about a month.

Pilots did say, however, that relocating the cross-chest zipper to a diagonal position made them more comfortable.

That was among several recommendations they made, Grossman said. Others noted they felt the older suits&#8217; neoprene neck was more comfortable &#8212; a design that may be incorporated in future versions of the new models.

Testing could begin as soon as next week after pilots are instructed in proper wear.

The Air Force&#8217;s Human Systems Wing at Brooks Air Force Base, Texas, will evaluate the suits&#8217; performance after Misawa pilots fly in them.

If favorable, Grossman said, the newer suits could become standard issue for fighter pilots throughout the Air Force. Besides giving them an added margin of comfort, they might potentially save money, too.

Ryan said the current anti-exposure suit costs $1,100 to $1,200 each; the newer version costs about half that much.