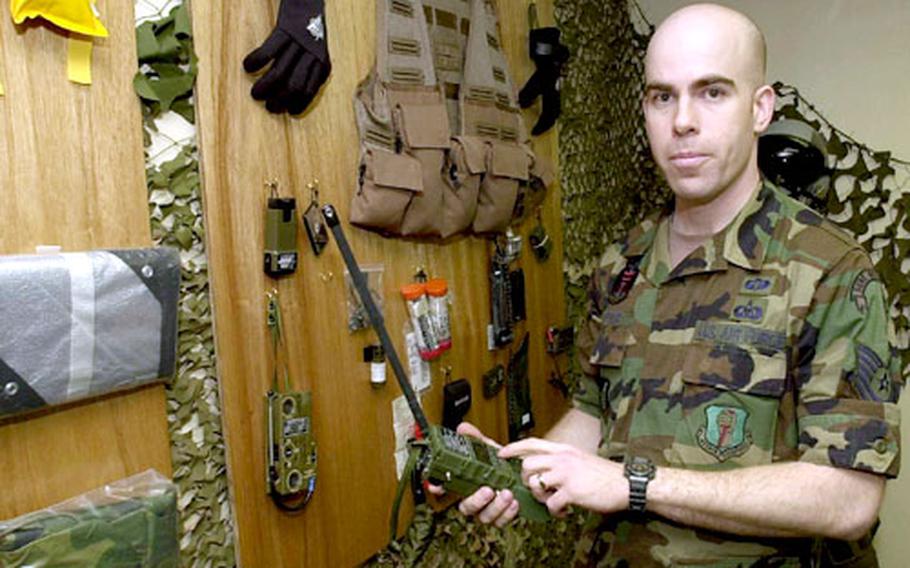 Tech. Sgt. Tim Foster holds a survival radio used for training F-16 pilots in survival, evasion, rescue and escape techniques on Friday at Misawa Air Base, Japan. The survival gear carried by F-16 pilots hangs on the training display board behind him. (Wayne Specht / S&S)

So did Navy and Air Force crewmembers aboard a Navy P-3C that made an emergency landing on China&#8217;s Hainan island in 2001 after colliding with a Chinese fighter.

Foster is a rare breed. He is one of 300 Air Force SERE specialists who provide survival training aimed at pilots who might find themselves in remote or hostile environments far from the safe cocoon of the cockpit.

&#8220;When they get to assignments like Misawa, we give them additional refresher training periodically that takes into consideration local conditions,&#8221; he said.

For Misawa pilots, that means flying over icy ocean waters and mountains &#8212; and possibly having to eject over such inhospitable terrain if the single-engine F-16 ever seriously malfunctions.

Pilots are taught to bury or camouflage equipment as the first step in evading possible capture, he said.

Foster said all pilots here carry a rucksack holding a bonanza of lifesaving gear. Stowed beneath the cockpit seat, it goes along when an explosive charge ejects seat and pilot from the plane.

Also inside: a whistle for signaling, flashlight, infrared strobe light, flares, fire starter, radio beacon and a survival manual. In the pilot&#8217;s survival vest are global positioning satellite radios, including a type Foster said he helped to test in Alaska in 1995.

He said survival training given pilots today is part of Code of Conduct training. The code embodies principles set forth to guide hundreds of U.S. prisoners of war, and potential prisoners, for almost 45 years.

Article two, says Foster, epitomizes the need for survival training: To avoid surrender and to evade capture at any cost short of death.

During televised coverage of the war in Iraq, Foster said, he sometimes wondered if those taken hostage, notably the seven 507th Maintenance Supply soldiers who eventually were freed after a week of captivity, had received SERE training.