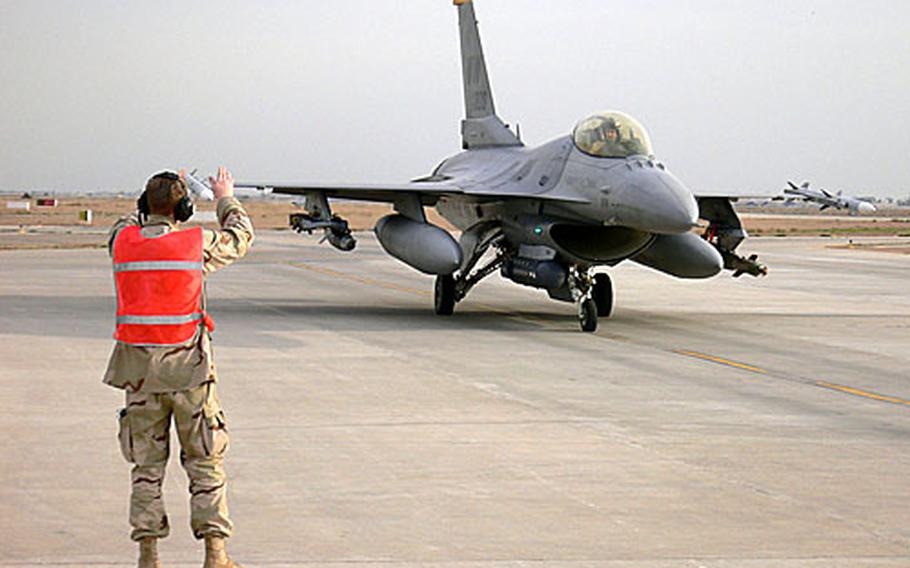 A Misawa airman marshals in an F-16 with the 14th Expeditionary Fighter Squadron at Balad Air Base, Iraq, after its return from a mission in Iraq. The 14th Fighter Squadron was the third expeditionary fighter squadron to stand up at Balad when the Misawa squadron deployed there in January. (Courtesy of the U.S. Air Force)

Dropping bombs during combat sorties in Iraq has been the exception, rather than the rule, for the deployed F-16 pilots from Misawa Air Base&#8217;s 14th Fighter Squadron.

However, often enough the mere presence of a fighter jet in the sky is just as effective, according to the squadron commander.

&#8220;The enemy usually stops whatever they are doing as soon as they hear F-16s overhead, so much of our utility is in simply getting overhead to prevent further attacks on our ground forces,&#8221; Lt. Col. Chuck Toplikar, the 14th Expeditionary Fighter Squadron commander at Balad Air Base, stated in a written response to a Stripes query.

But sometimes the bombs do fly, as happened during a fierce, 36-hour fight Jan. 28 at Najaf, south of Baghdad. A recent Air Force news release from Balad states that more than 200 insurgents were killed and 100 gunmen captured during a battle in which flights of F-16s from all three Balad F-16 units, including Misawa&#8217;s, provided close-air support.

Capt. Ben Vickers of the 14th Fighter Squadron and his wingman were 90 miles south of Najaf when they changed course, according to the Balad news release.

&#8220;We knew an (AH-64 Apache helicopter) aircraft had gone down, and troops had come in contact with the enemy and were receiving fire,&#8221; Vickers was quoted in the news release as saying. &#8220;Even with all my training, I still feel like a rookie in the Super Bowl.&#8221;

The flight lead for Misawa in the Najaf battle answered questions about the mission by e-mail. His identity was withheld for force protection reasons.

Flying at night, the pilot said, the 14th Fighter Squadron jets dropped two 500-pound bombs on a burning building in which several insurgents were thought to be hiding.

What was challenging, while airborne for more than six hours, was keeping track of so many other players who were involved, coordinating air refueling assets and airspace time extensions. They also constantly had to stay abreast of other factors including worsening weather at their home base, he wrote.

More than 400 maintainers, pilots and other Misawa personnel deployed to Balad in mid-January for four months.

The deployment has gone pretty much as expected, the unidentified pilot wrote.

Toplikar said the F-16s are tasked to fly all over Iraq, although most missions lately have been in the Baghdad area, where the fighters have been needed most. Pilots have used the aircraft&#8217;s targeting pods to find improvised explosive devices; or enemy forces positioning IEDS or attacking coalition troops.

While enemy forces usually scatter when they hear F-16s, Toplikar said, &#8220;Sometimes we find them and either follow them and pass them off to ground forces for capture and interrogation, and sometimes we bomb or shoot them, depending on the ground commander&#8217;s requirements.&#8221;