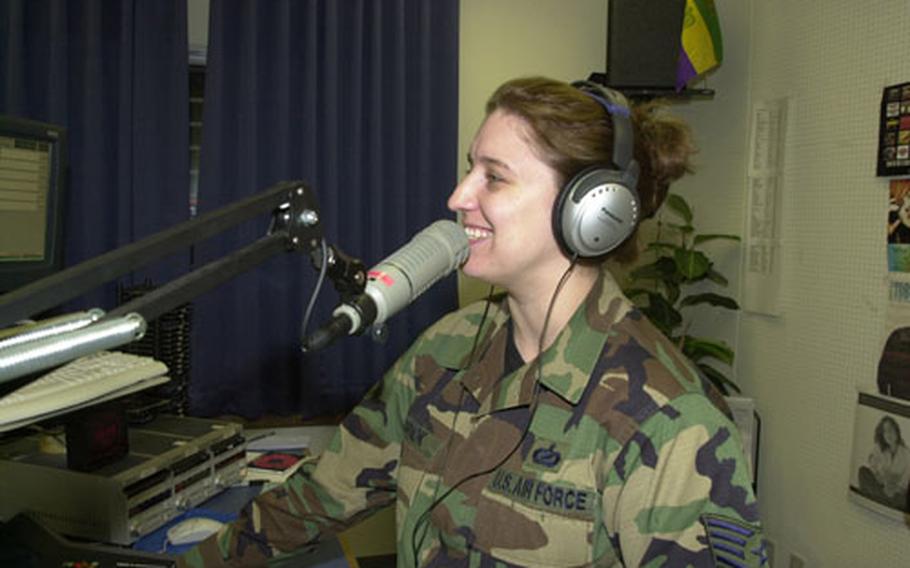 Staff Sgt. Stephanie Csornok, non-commissioned officer-in-charge of radio for American Forces Network at Misawa Air Base, Japan, beat out thousands of other entrants to win the Defense Department&#39;s 2003 voting slogan contest. She penned, "It&#39;s Your Future, VOTE For It." (Jennifer H. Svan / S&S)

Csornok found out last Friday that she had won.

Csornok said she entered her slogan at the last minute.

As the noncommissioned officer in charge of radio at American Forces Network here, Csornok learned of the contest from the base&#8217;s voting assistant officer, who asked the station to advertise it.

She submitted it shortly before the July 15 deadline.

Csornok, 29, from Elgin, Ill., says her slogan carries an important message: &#8220;Voting is an investment in your future, just as much as a retirement plan is,&#8221; she said. &#8220;You&#8217;re voting for lawmakers that will be passing or repealing laws that will ultimately determine how you live.&#8221;

For her efforts, Csornok will receive a plaque from the Secretary of Defense.

Her slogan also will be circulated worldwide. It will be featured in the Federal Voting Assistance Program&#8217;s 2004-05 voter outreach effort to motivate millions of citizens covered by the Uniformed and Overseas Citizens Absentee Voting Act, according to &#8220;Voting Information News.&#8221;

The slogan will be displayed on motivational posters and in the soon-to-be released 2004-05 Voting Assistance Guide.

The second- through fifth-place winners, who also will receive plaques from the Secretary of Defense, are:

Contest judges included two congressional Representatives, a senator, the Minnesota secretary of state, and the chief executive officer of the Advertising Council Inc.