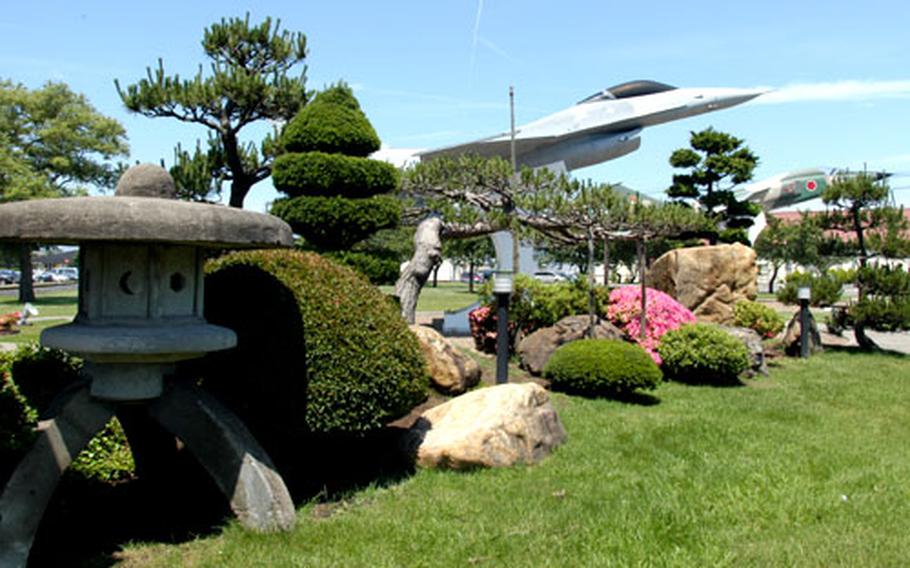 A U.S. F-16 and Japanese F-1 stand side-by-side in Friendship Park on Misawa Air Base, Japan. Base officials learned Wednesday that Misawa was named the 2005 Commander in Chief’s Installation Excellence Award winner for the Air Force, an honor that also comes with a $1 million prize for quality-of-life projects. (Jennifer H. Svan / S&S)

MISAWA AIR BASE, Japan &#8212; Twice was the charm for this northern Japan base.

Misawa has received the 2005 Commander in Chief&#8217;s Installation Excellence Award, making it the top base in the Air Force and the recipient of a $1 million prize for quality-of-life projects.

The base nudged out McConnell Air Force Base, Kan., and RAF Lakenheath, England, for the award.

Misawa was a finalist last year for installation excellence, which for the Air Force eventually went to Beale Air Force Base in Yuba County, Calif.

This year&#8217;s five winners were selected for their exemplary support of Defense Department missions, according to a Pentagon news release Tuesday.

&#8220;Each winning installation succeeded in providing excellent working, housing and recreational conditions for the people assigned to that installation,&#8221; the statement read.

Irby believes the clincher for Misawa was the partnership between the U.S. military and local Japanese and Japan Air Self- Defense Force. &#8220;We&#8217;re working side-by- side,&#8221; she said.

Bartley said installation excellence was a team effort, crediting wing commander Brig. Gen. Bill Rew and former vice wing commander Col. Don Weckhorst for steering the award-winning package submission. But Misawa airmen, the Navy at Misawa, the Army, the few Marines assigned here, JASDF&#8217;s 3rd Air Wing, and Misawa city and Aomori prefecture officials all had a hand in the award &#8220;based on their contribution to the mission and to the people on this base,&#8221; Bartley said.

Indeed, base leaders already are preparing a list of ideas on how to spend the $1 million, which Bartley said must be used during this current fiscal year on quality-of-life initiatives. Officials began collecting feedback from community members and group commanders and chiefs for quality-of-life projects earlier this year since Misawa, as one of three Air Force finalists for installation excellence, was already guaranteed $500,000, Bartley said.

The &#8220;wish list&#8221; includes a dog park, coffee bar for Weasel&#8217;s Den, a rope tow for the base ski hill, fitness machines, base beach equipment, playground equipment upgrades, a keyless entry system for lodging, and additional base cable TV channels.

No decisions have been made, Bartley stressed, but programs, services or infrastructure that benefit the entire community will receive higher priority.

Senior Airman Maurice Owens, 27, hopes the base continues to sink money into the Single Airmen Extreme Program and other services for unaccompanied personnel.

Misawa will send a team to Washington, D.C., for the Aug. 17 installation excellence awards ceremony.