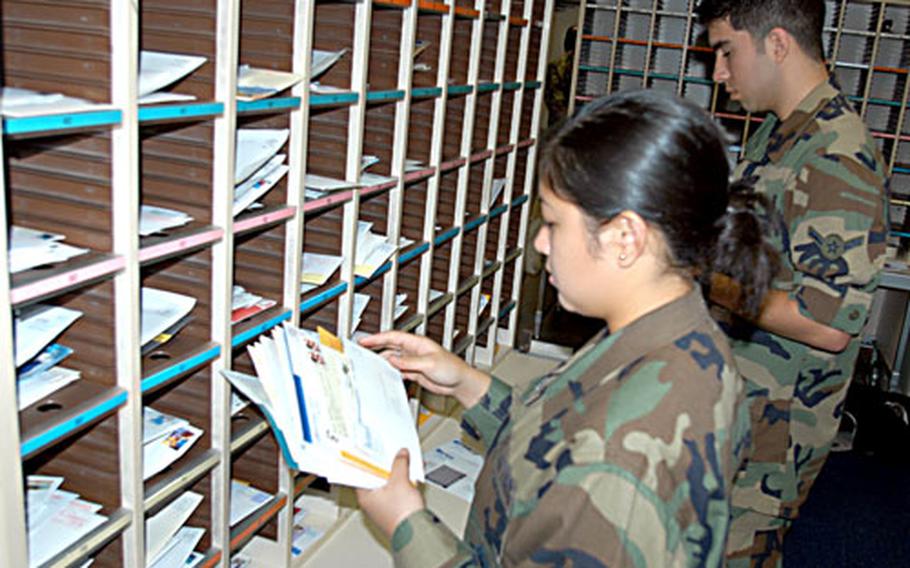 After winning best post office in Pacific Air Forces two years in a row, Misawa was named the Air Force&#8217;s most outstanding large postal facility for 2005, the first time ever.

An extensive effort to recruit volunteers paid off.

Misawa led PACAF in 2005 in volunteer hours with an average of 550 per month, helping to offset staffing shortages caused by servicemember deployments, Wilhite said.

&#8220;We send three to four people out on every (Aerospace Expeditionary Force cycle),&#8221; he said, to Kuwait, Iraq and other overseas locations where deployed troops get mail.

Wilhite and his team of 26 military members and four Japanese civilian workers &#8212; part of the 35th Communications Squadron &#8212; handled about 2.3 million pounds of mail in 2005. Misawa&#8217;s post office is the only in PACAF to transport mail to and from the airport as well as process it; other bases have what&#8217;s called aerial mail terminals at airports to receive mail and transport it to base post offices for processing.

Mail arrives and departs on three commercial passenger flights daily at the Misawa city airport. On the way out, it&#8217;s dropped off at Haneda airport in Tokyo, where a Yokota Air Base mail crew picks it up and gets it to Narita International Airport by the next day, Wilhite said.

Mail reaches post office boxes at Misawa the same day it arrives. In 2005, the post office instituted a noon-to-midnight shift so workers could process mail after the last commercial flight of the day at 7 p.m.

Keys to lockers in the lobby are put in P.O. boxes so people still can claim small parcels after the pick-up window closes.Those on Misawa&#8217;s global e-mail list are notified when they get registered or express mail.A postal annex was opened in the base exchange lobby for peak holiday mailing periods.As much as the award signified, Tuesday was business as usual at Misawa&#8217;s post office. The focus already had turned to a big PACAF inspection in August.

And the winners are...