Misawa museum lands an F-16 fighter for its air park 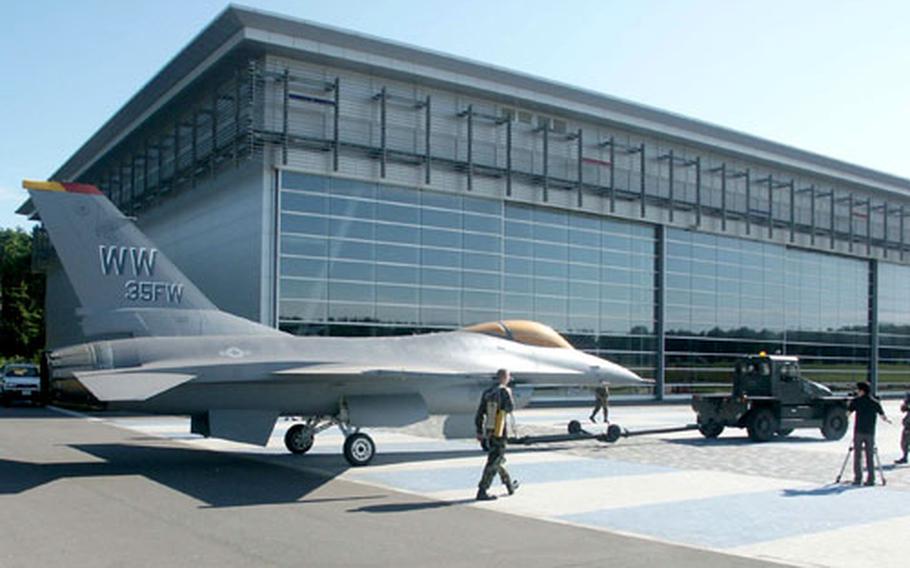 An F-16 on loan to the Misawa Aviation and Science Museum from the 35th Fighter Wing was towed to the museum grounds Tuesday morning. (Bradley Sprague / Courtesy of U.S. Air Force)

The 1978 fighter is on loan indefinitely as a static display at the museum&#8217;s air park along with seven other aircraft, including a P-3 from Naval Air Facility Misawa, and a T-33 &#8212; also delivered Tuesday by the Japan Air Self-Defense Force.

The 2-mile haul to the air park took five years to complete.

Senior leaders at Misawa tried to donate the inactive bird to the city in 2000, according to wing historian Senior Master Sgt. Donald Koser. But the goodwill gesture stumbled over several rules governing such an international handover under the Air Force&#8217;s museum program. The wing, as required, could not find a Japanese organization to sponsor the aircraft as a gift, Koser said, since doing so would have incurred a substantial tax based on the jet&#8217;s multimillion-dollar price tag.

But the idea was given new life when in March 2004, NAF Misawa turned over an Orion P-3A to the museum &#8212; a donation in spirit though the Navy maintains ownership and does occasional maintenance, Navy officials said at the time.

&#8220;I think the fact the Navy was successful in getting theirs out there definitely pointed us in that direction,&#8221; Koser said.

A loan agreement between 5th Air Force and the Japanese government was drawn up, opening the door to displaying the F-16 at the air park, according to base officials.

The memorandum of understanding, to be signed by Lt. Gen. Bruce A. Wright, 5th Air Force and U.S. Forces Japan commander, essentially lays out who&#8217;s going to be responsible for what, said Capt. James Lage, a Misawa spokesman. The wing will conduct periodic upkeep on the jet, Lage said, to ensure it maintains the proper U.S. Air Force F-16 markings.

Loaning the plane, however, isn&#8217;t as simple as signing on the dotted line. The weathered fighter, exposed to the elements for years, had to be restored so it could properly and safely be displayed, said 2nd Lt. Kevin Walton, avionics flight commander, 35th Maintenance Squadron. The five-week process, led by the fabrication, accessories and maintenance flights, included bird-proofing openings, riveting loose flaps, removing classified equipment, draining fuel and other flammable fluids and repainting the aircraft. About 60 people chipped in, Walton added, many volunteering off-duty to finish the job.

Brig. Gen. Bill Rew, the outgoing 35th Fighter Wing commander, plans to attend an F-16 dedication ceremony at the museum in late August before moving on to his next post &#8212; commander of 57th Wing, Air Combat Command, Nellis Air Force Base, Nev.

The jet bears the name of Capt. Bill Rew as aircraft commander. Rew also flew in the plane as a second lieutenant in the early 1980s, Koser said.

Airman 1st Class Joshua Hellhake, a structural maintenance journeyman at Misawa, also gets his name on the bird as the dedicated crew chief, Walton said, since he spent numerous hours restoring the jet.

Misawa city officials, who asked the base to donate an aircraft when the museum and air park was in the planning stages, said they are pleased with the F-16 loan.