Misawa leaders on track to build better ties between base, city 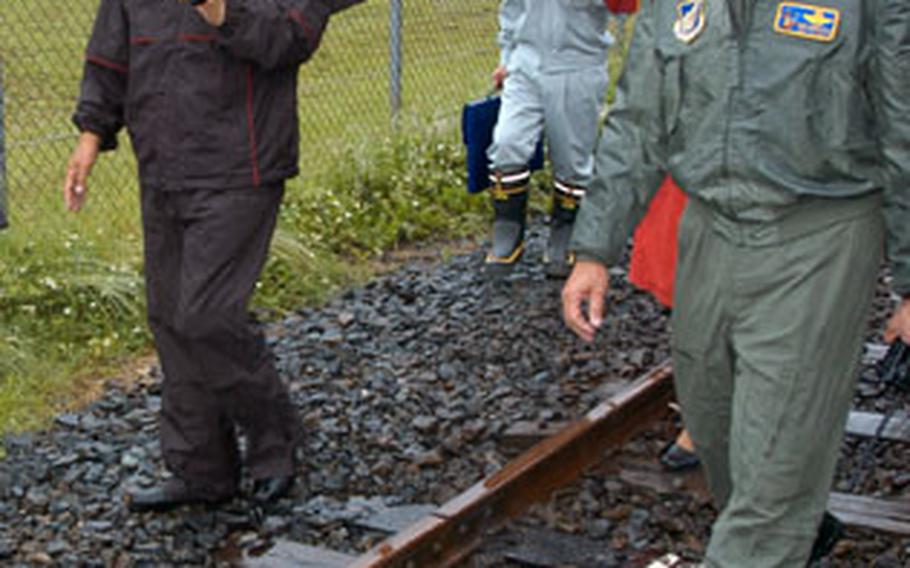 Misawa City Mayor Shigeyoshi Suzuki, left, walks with 35th Fighter Wing Commander Brig. Gen. Sam Angelella last week along railroad tracks that skirt the main Misawa Air Base and the new American Village being built in Misawa city. The local leaders discussed what to do with the area once the tracks are pulled sometime in late fall. (Jennifer H. Svan / S&S)

MISAWA AIR BASE, Japan &#8212; Two local leaders met Thursday under umbrellas to discuss what to do with a wall and a swath of land that runs between two cultures.

Brig. Gen. Sam Angelella, 35th Fighter Wing commander, and Misawa city Mayor Shigeyoshi Suzuki walked, during a persistent downpour, along the railroad tracks that skirt Misawa Air Base&#8217;s main base, discussing what to do with the area as the adjacent American Village evolves.

The city, with funding support from the Japanese government, is building a new 9.4-acre shopping district outside the base&#8217;s main gate as part of a project to spruce up downtown and create a gathering place for both Americans and Japanese.

The tracks, which extend about a mile from the main gate to the train station, will be pulled up sometime this fall because the base no longer uses that railway for fuel delivery, military officials said.

Envisioned in its place, at least along where the base and American Village intersect, is a biking and walking path, Angelella said.

Base officials said they&#8217;re considering ways to bolster security around the base perimeter in that area, once the tracks disappear. Suzuki told Angelella during last week&#8217;s meeting that if the base puts up a new wall, he hopes it&#8217;s one city residents can peer through so they don&#8217;t feel separate from the base.

Renovation for American Village started in September 2004. The city so far has dismantled 59 of 141 old houses to make way for new construction and street widening, Misawa city officials said in a written response.

One newly standing four-story building across from the main gate is hard to miss: A bright and rather large karaoke sign adorns its facade. The &#8220;La La La&#8221; karaoke bar on the third and fourth floors will open Monday, city officials said.

Also in the building, a Hawaiian restaurant called &#8220;Tubes&#8221; is scheduled to open later this month and a Japanese-style restaurant &#8220;Hohryoh,&#8221; which translates to &#8220;bumper catch of fish,&#8221; will open in August, city officials say. They also said a shopping mall is scheduled to open in July 2008 and total renovation of the shopping street should be complete by March 2009.