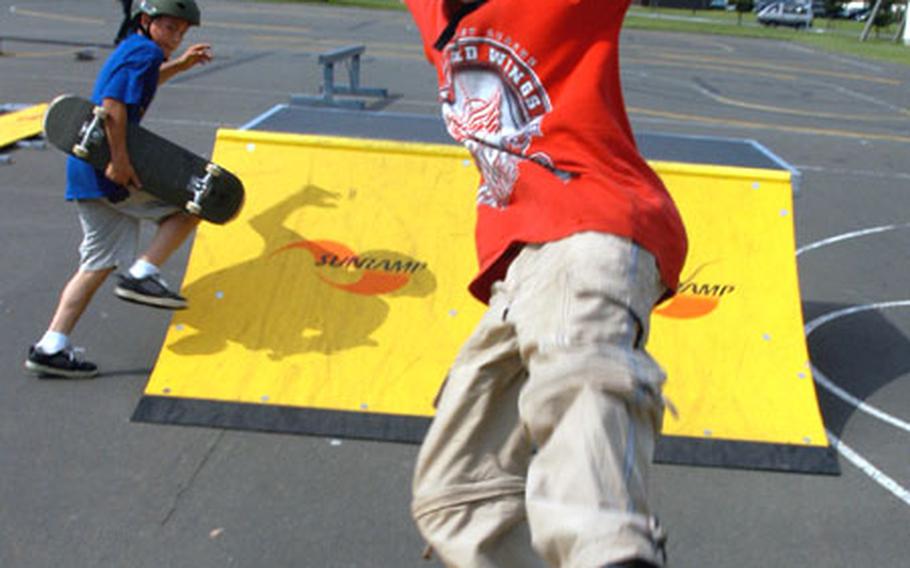 MISAWA AIR BASE, Japan &#8212; Kids with quick feet, little fear and a few scrapes and bruises are hammering the half-pipe here this week &#8212; on skateboards.

Skateboard camp is among the free youth camps Pacific Air Forces is sponsoring at PACAF bases this summer. Also included are cheerleading, &#8220;all sports&#8221; and the Missoula Children&#8217;s Theater, base officials said.

At Misawa, two professional skateboarders from San Diego are teaching stunts with weird names to 27 kids, ages 10 to 16.

Most of the Misawa campers, appearing less than half the age of their instructors, fearlessly glided up and down half-pipe ramps, some trying to flip their boards with quick feet; a few took a spill, but nothing serious. At Misawa, all skaters are required to wear helmets.

Whitehead said learning to skateboard is about building self-confidence. Practice is important too.

Whitehead said he works for an agency that contracts skateboard instructors to Air Force camps around the world. The camp is open to youth ages 10-16, beginner to expert; Misawa&#8217;s camp is full.

Whitehead and his training partner are to lead a camp at Kadena Air Base, Okinawa, next week.

Yokota Air Base near Tokyo also holds a skateboard camp next week, from 9 a.m. to 1 p.m. Monday through Friday. Sign up in advance at the East Youth Center; call DSN 225-7422 for more information. The camp is limited to the first 20 participants. Campers must bring a skateboard, helmet, knee and elbow pads, a water bottle and towel.