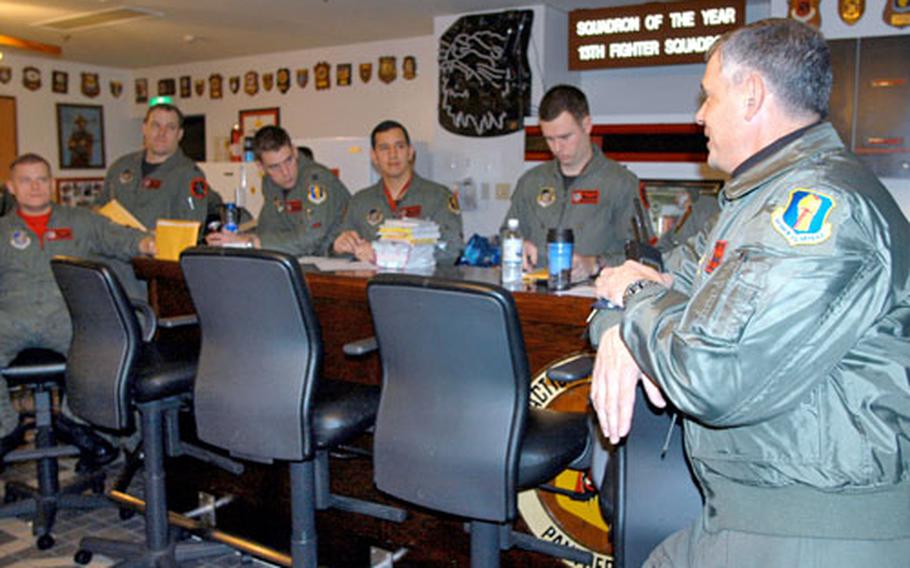 MISAWA AIR BASE, Japan &#8212; While one squadron of fighter pilots here will go to war this month, another already has left for the ultimate spin-up to war.

In Friday morning&#8217;s wee hours, more than 10 aircraft with the 13th Fighter Squadron here headed over the Pacific Ocean toward Nellis Air Force Base, Nev., for the elite combat training exercise known as Red Flag.

Red Flag pits pilots from all U.S. services and several allied countries against each other in various combat scenarios over a vast range north of Nellis.

More than 150 fighter pilots and maintainers from Misawa will be part of the upcoming Red Flag, running Jan. 18-26.

Okinawa&#8217;s Kadena Air Base also plans to send about 150 airmen and several F-15s and refueling aircraft, according to base officials. The Kadena crews were scheduled to depart early Saturday morning.

Mentch said routine training at Misawa versus Red Flag is &#8220;kind of the difference of driving your race car [with] just you on the track and [having] 10 people on either side of you.&#8221;

1st Lt. Tom Tauer figures Red Flag will be the highlight so far of his three-year flying career &#8212; that is &#8220;until we get to the desert,&#8221; he said Friday, shortly before departing for Nellis.

The pilots were expected to stop at Hickam Air Force Base, Hawaii, after a nine-hour flight before pushing on for the final six hours or so to Nellis.

Tauer said his cockpit would be packed tight with essentials such as night-vision goggles, two G-suits, snacks and some &#8220;Battle Ship&#8221; game grids that the air crews planned to play over the radio to stay alert.

In Japan, Misawa&#8217;s fighter pilots use a small training range and are limited to dropping 25-pound practice bombs. At Red Flag, they&#8217;ll be able to fire just about everything, including laser-guided bombs, Joint Direct Attack Munitions (JADM) and cluster bomb units, Mentch said.

Dropping real bombs is important training, he said, because &#8220;you can get a feel for how it performs in flight to better predict how it&#8217;s going to operate in a combat environment.&#8221;

One reason Red Flag got its start in November 1975 was to give pilots &#8220;that first combat experience, because we found many years ago that most of our new pilots were lost on their first couple combat sorties,&#8221; said Brig. Gen. Sam Angelella, 35th Fighter Wing and Misawa base commander.

The genesis of Red Flag, according to the Air Force Association&#8217;s Air Force Magazine, was rooted in the Air Force&#8217;s difficult Vietnam War experience and studies that showed a pilot&#8217;s survival rate shot up significantly after 10 combat missions.

Maj. Richard &#8220;Moody&#8221; Suter, often called &#8220;the father of Red Flag,&#8221; envisioned a training environment so realistic that a new pilot would log his first 10 &#8220;combat&#8221; missions in a controlled environment, having survived his most vulnerable period before actual combat, according to the magazine.

For the upcoming Red Flag, the 13th Fighter Squadron had input into its training plan, Williams said, and expects to practice close-air support of ground troops with other units since that will be the squadron&#8217;s primary mission in Iraq.

But that will only be a portion of the training, Mentch said. It will &#8220;probably be a little overboard for what I think we would see in Iraq or Afghanistan,&#8221; he said.

Stars and Stripes reporter Cindy Fisher contributed to this report.