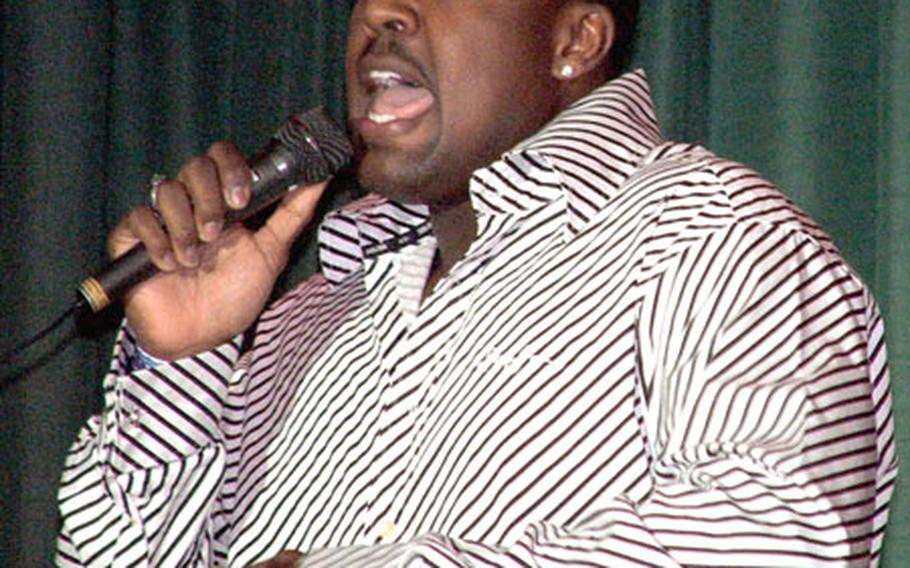 Staff Sgt. Jeronimo Cordova-Estrada was one of seven singers to audition for the inaugural “Misawa Idol” last weekend at Misawa Air Base, Japan. A second open audition is this Saturday at the Tohoku Enlisted Club Ballroom. The eventual “Misawa Idol” wins $2,000. (Courtesy of U.S. Air Force)

MISAWA AIR BASE, Japan &#8212; The spotlight made the audience disappear for Staff Sgt. Jeronimo Cordova-Estrada, but he couldn&#8217;t quell the butterflies: He faltered in the first few notes of his a cappella solo. But he pulled it together and earned mostly kind words from the judges &#8212; though one ripped him for wearing a tie.

It was all part of the first night of auditions for the inaugural &#8220;Misawa Idol&#8221; last Saturday at the Tohoku Ballroom.

Misawa is the latest base in Japan to hold a spin-off of the Fox television hit &#8220;American Idol.&#8221; Seven military members, civilians and spouses sang last week in front of about 160 people. The final open audition is at 7:30 p.m. Saturday. To try out, be at the club by 7 p.m. for a briefing, said Erin Lahart, club operations supervisor and entertainment-and-marketing specialist. &#8220;We&#8217;re probably going to take six to 10 [contestants] and cut from there.&#8221;

Top prize is $2,000, with $100 going to the best performer each week. The final show is set for June 3. Individuals must be at least 18 and a club member to audition. The show is open to anyone 18 or older. Free to club members, it costs $5 for nonmembers.

The club has adopted some &#8220;American Idol&#8221; features: Master Sgt. Anthony Campbell, a first sergeant with Misawa Security Operations Center, acts as the show&#8217;s cantankerous Simon Cowell &#8212; he&#8217;s the one who commented on Cordova-Estrada&#8217;s stuffy tie (Cordova-Estrada evertually took it off) &#8212; and Windy Torgerson, 35th Civil Engineer Squadron commander&#8217;s secretary, &#8220;seems to be our Paula [Abdul],&#8221; Lahart said. &#8220;She was hitting Tony the other night.&#8221; Kimberly Evans, an Edgren High School volunteer, is the third judge, and a different guest judge sits on the panel every week.