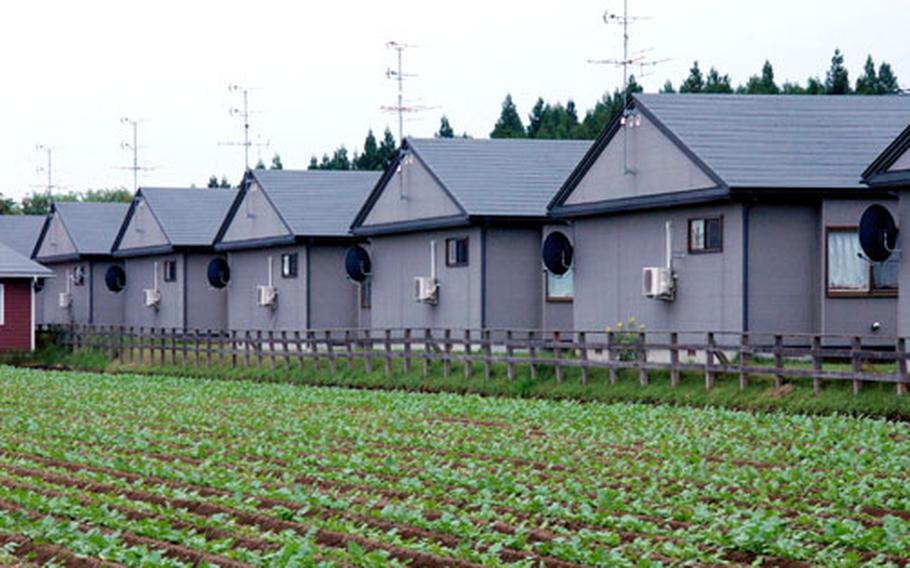 Japanese landlords, who built American-style houses like these in Oirase, are worried about a new policy at Misawa Air Base that will require many newly arriving servicemembers and their families to live on base. (T.D. Flack / S&S)

TOKYO &#8212; A policy requiring newly arriving military families to live on Misawa Air Base could save the Air Force nearly $1 million a month, according to one base leader.

The "on-base first" policy, which began at Misawa on Sept. 1, will fill up the 480 family units currently empty and ready for living, said Col. Dave Wiegand, commander of the 35th Mission Support Group.

The push for the cost-savings plan came last year at the direction of the Pentagon and is meant to encourage savings at bases worldwide, Wiegand said.

In Japan, where the local government pays for U.S. military construction, the move also is meant to show that the Americans are a good investment, Wiegand and others have said. Already, Kadena Air Base in Okinawa has adopted a similar policy. Kadena is in charge of all the base housing areas on Okinawa.

"We want better stewardship of the resources we have and that we have been given," Wiegand said in a phone interview earlier this week.

Each family that lives off base spends, on average, $2,000 a month in rent, Wiegand said. With nearly 500 units ready for living, that could mean nearly $1 million in savings, he said.

Yet on-base life has drawbacks for military families:

The base, because of its location in northern Japan, doesn&#8217;t have air conditioning in its housing units, and there are no plans to install it.Non-smoking families can request non-smoking housing, but there&#8217;s no guarantee they&#8217;ll get it, Wiegand said.Depending on the number, ages and gender of children, some siblings might have to share rooms.The cable TV package on base offers fewer channels than those off base.Off-base homes tend to be larger and often have garages.There&#8217;s a reason for those garages, according to Susumu Kohiruimaki, director of the Misawa Housing Association.

About five years ago, local housing agencies began building homes to cater to American families, he said. They added some features, like handrails on stairways, to meet military base inspections, he said.

Those agencies were able to charge higher than market value on the rents, which still fell just below the maximum military allowance, both military officials and local officials said.

Now there&#8217;s an excess housing supply in the area, including more than 1,000 American-style homes in Misawa and nearby Oirase, Kohiruimaki said. Currently, 3,235 Americans under the status of forces agreement live in Misawa City and neighboring towns Oirase and Rokunohe, according to a spokesman for Misawa City&#8217;s Military Affairs Office. Around 4,000 people live on base.

The association is worried its customer base will dry up. In addition to the 480 empty homes on base, another 527 are being renovated. Those will be available at the end of 2013, according to a Misawa base spokeswoman.

"At this time, we do not know what to do," Kohiruimaki said.

Misawa city officials met with base officials a couple of weeks ago to express concerns, according to Satoshi Tomita, chief of the Misawa city military affairs office.

"If the policy is carried out, an estimated loss from the rent will be 842 million yen (about $9 million) in Misawa and neighboring Oirase and Rokunohe" annually, he said. Wiegand said some families &#8212; mostly civilians and contractors &#8212; will still have the option to live off base. Also, any family with a member who has a medical condition, such as severe allergies that require air conditioning or non-pet housing, can request to live off base.

Families who bring their pets to Misawa will still get preference on pet-friendly housing, Wiegand said. But waivers will not be granted for families who want a pet after moving into housing that does not allow pets, he added.

"There will still be a sizable percentage of people who will need to live off base," he said.

Housing policies vary from base to baseOfficials at Misawa and Kadena air bases have adopted "on-base first" housing policies that require newly arriving families to live on base rather than rent homes &#8212; at military expense &#8212; off base. Kadena, which controls housing for all U.S. military bases on Okinawa, announced its policy in July when the occupancy rate was 84 percent. At Misawa, the occupancy rate is at 72 percent; that does not include 527 homes under renovation. Here&#8217;s a look at the housing situations at other bases in Japan:

Camp Zama The Army&#8217;s current policy in Japan aims for 95 percent occupancy on base. Soldiers are generally required to live on post unless adequate housing for family size or rank is unavailable, base officials said.

Marine Corps Air Station Iwakuni Single and family housing for Marines at Iwakuni is at 95 to 98 percent, according to spokesman Capt. Lawton King. All single Marines E-5 and below are required to live on base; families may request to live off base, he said. Currently, there&#8217;s no expected change to the policy.

Naval Air Facility Atsugi Atsugi&#8217;s occupancy rate is about 92 percent. Atsugi currently has a policy that requires all E-6 and below with less than two dependents to live on base, according to spokesman Tim McGough.

Sasebo Naval Base On-base housing is in short supply, according to spokesman Charles Howard. Currently, only about half of the families that want to live on base can, he said Monday. Housing units are 96 percent filled, he said.

Yokosuka Naval Base Overall, the Yokosuka community has an occupancy rate of about 85 percent among the base and two housing areas, and usually 98 percent at the main Yokosuka Naval Base, according to base spokespeople. Yokosuka does not have a mandatory on-base policy.

Yokota Air Base Yokota officials plan to go to a similar policy after housing renovations are completed in the next few years, according to spokesman Maj. Christopher Watt. Currently, the occupancy rate is 86 percent. "We prefer that you live on base," Watt said, "but if you want to live off base, you can."