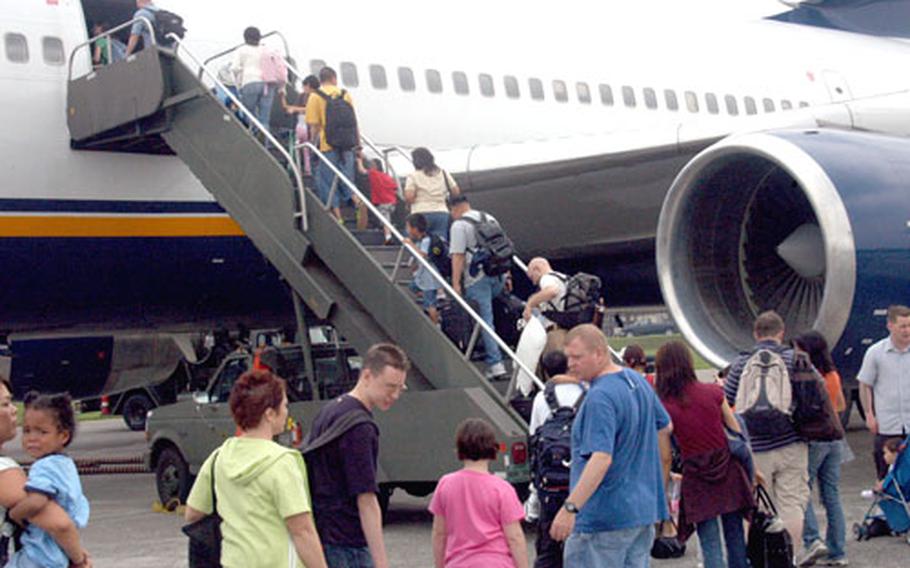 Passengers at Yokota Air Base, Japan, board a Patriot Express flight bound for Seattle this summer. The U.S. military’s chartered commercial air service no longer will stop at Misawa Air Base and Iwakuni Marine Corps Air Station after next week. (Vince Little / S&S)

It was a last-ditch measure Pacific Command arranged to keep the U.S. military&#8217;s chartered commercial air service flying to the two bases beyond Oct. 1.

&#8220;This is part of the original plan from two years ago in which (U.S. Transportation Command) said it won&#8217;t be renewed for mainland Japan,&#8221; Harris said. &#8220;It was a great effort. We actually had times in which they exceeded 80 percent on specific flights and did very well. But cumulatively on a weekly basis, they weren&#8217;t able to hang in there with it and wound up at 60 percent for June, July and August.&#8221;

The last flight intended solely for mainland Japan servicemembers is due to arrive at Yokota on Wednesday and then make stops in Iwakuni and Misawa the next day before returning to Seattle.

The Patriot Express will continue passing through Yokota every Friday and Saturday on a weekly roundtrip mission from Seattle to Kadena Air Base, Okinawa. However, Okinawa-based servicemembers and their families normally claim most seats.

The duty-passenger count is the key ingredient in making the flight revenue-neutral for Transportation Command &#8212; and a required stipulation in preserving a huge space-available travel benefit for the military community, Harris said.

From Oct. 1, 2005, through August, the mainland-Japan flights carried 10,639 duty passengers and another 6,754 on space-A status, according to Harris.

The average cost recovery was 40 percent.

Along the Okinawa route during that same span, 6,073 space-A customers flew on the Patriot compared with 19,640 duty passengers, who accounted for 105 percent of cost recovery, far exceeding fiscal goals.

Provided viability rates are maintained, the Seattle-Kadena flight that passes through Yokota will continue indefinitely, he added.

Meanwhile, Misawa and Iwakuni base leaders have begun mapping out options for U.S. military members and families there to mitigate the Patriot&#8217;s demise, said Capt. Jason Medina, a USFJ spokesman.

At Misawa, officials are sending more travel information to people rotating into Japan.

There has been concern about pet shipments without the base flight.

Other tips have focused on how to use transfer systems between Haneda and Narita airports in Tokyo.

Without the Patriot, Iwakuni intends to make Hiroshima the first commercial alternative for Marines, officials said. It&#8217;s a 90-minute ride from the base, but passengers will have to take a connecting flight to Narita for international hops.

The alternative is Kansai International Airport in Osaka, which will require an additional six hours by bus and train to or from Iwakuni.

The loss places more importance on the role of base sponsors in both locations to provide clear marching orders, he added.

The Department of Defense liaison at Narita also will hire an additional staff member.

By eliminating Patriot Express service to mainland Japan, the Defense Department expects to save about $10 million a year, according to Harris.

Harris said USFJ leaders exhausted all efforts to secure a reprieve for the weekly Patriot mission to mainland Japan.