Misawa is ramping up its diabetes education 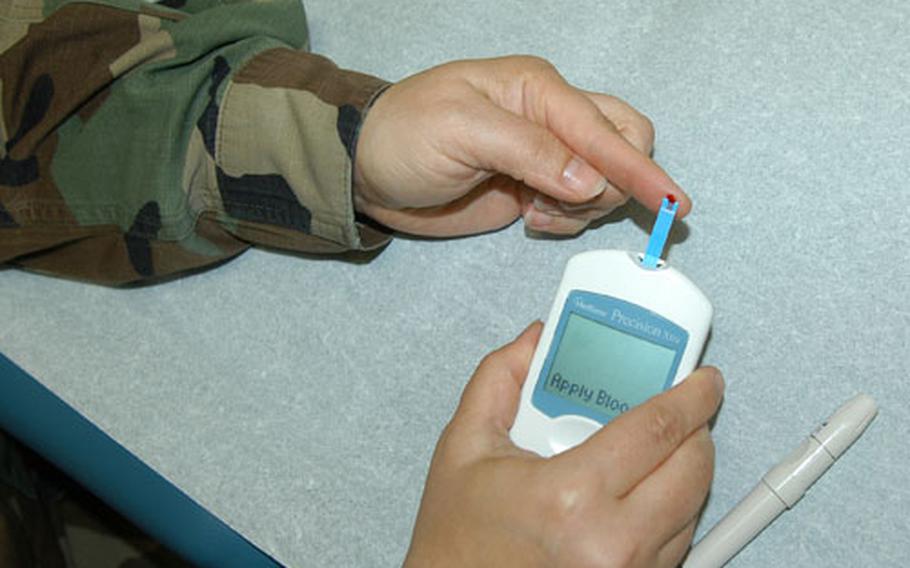 With that trend in mind, the 35th Medical Group is looking at expanding its diabetes education program, officials said.

She hopes to launch a program this fall that would bring in different specialists at the hospital to speak to diabetics about health issues related to the disease.

Left unchecked, diabetes can cause a host of complications, from blindness to kidney failure.

Hoffman, whose grandmother died of diabetes, said her goal is to help diabetics understand the disease&#8217;s moving parts.

In 2004, about 1.4 million adults between 18 and 79 years old were diagnosed with diabetes in the U.S., according to the Centers for Disease Control and Prevention. From 1997 through 2004, the number of new diabetes cases increased by 54 percent.

Type 2 diabetes accounts for about 90 percent of newly diagnosed cases, according to the National Institutes of Health. Once called &#8220;adult-onset&#8221; diabetes because it usually occurs later in life, Type 2 diabetes is becoming more prevalent in children and young adults, with some researchers linking the prevalence to obesity and lack of exercise.

Medical officials at Misawa estimate that 55 of the approximately 13,000 base residents are diabetic &#8212; with about half of those newly diagnosed cases. Most are civilians and dependents, a mix of Tricare beneficiaries, schoolteachers, contractors and civilian personnel. One is a child.

Those kids may get additional help through another new program that the 35th Medical Group plans to launch this fall. The initiative is aimed at overweight children and teenagers, according to Maj. James Stryd, 35th Aeromedical Squadron health promotion flight commander. Working with schools, health providers hope to address families in a forum about issues ranging from nutrition to fitness, Stryd said.

Styrd said Misawa is running &#8220;right at or just below the national numbers for kids at risk for obesity or being overweight.&#8221;

Most common types of diabetes

Type 1: The pancreas, the organ that makes insulin, does not work correctly. The cells that produce insulin are damaged or destroyed, so the body makes little or no insulin. Usually occurs in children or young adults.

Type 2: The body makes some insulin but not enough, or the insulin the body makes does not work correctly. More common in overweight, older adults, but also can be dianosed in young people.