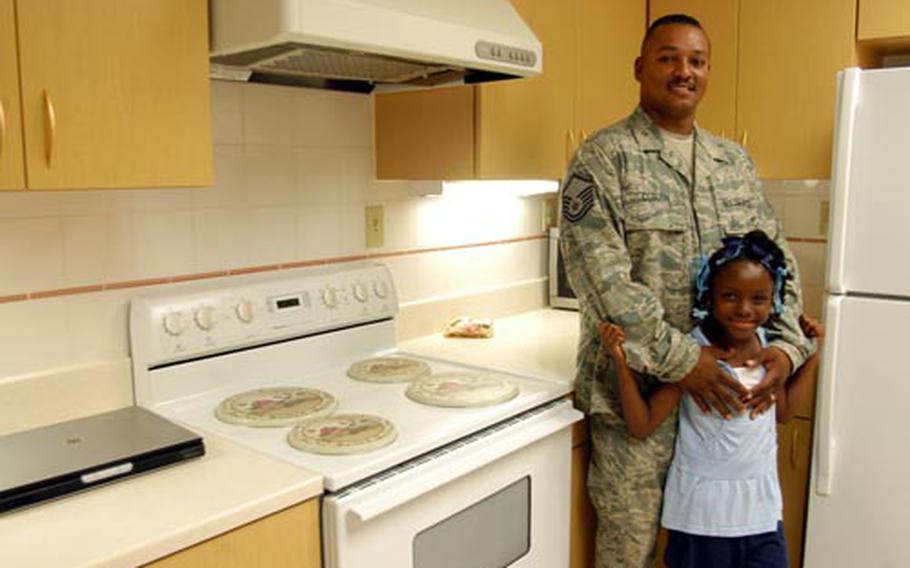 Master Sgt. Dexter Coburn stands with daughter Desiree in the remodeled kitchen of his H-style military family house at Misawa Air Base, Japan. Coburn&#39;s house is one of 126 housing units refurbished so far at Misawa since January 2007. More units on both main base and the north area are scheduled for renovations over the next several years. (Jennifer H. Svan / S&S)

MISAWA AIR BASE, Japan &#8212; Master Sgt. Dexter Coburn knew choosing to live on base would mean an extra move for his family.

Sixteen months into his assignment at Misawa, the day came. With the Coburn&#8217;s H-style military home slated to be remodeled as part of a $48 million government housing renovation project, the family was forced to move.

The move was hassle-free, Coburn said. The base arranged and paid for the move, and Coburn received a dislocation allowance, a stipend intended to partially cover relocation expenses not otherwise reimbursed, according to the Air Force.

"We slept in the new place that night," Coburn said of the April move.

The Coburn family moved into a refurbished home on main base, one of 126 units completed so far under the Post Acquisition Improvement Program, or PAIP, a Congressionally-funded multiyear effort that will result in renovation of more than 800 units here.

The first phase, with 155 units left to remodel, is expected to finish by July 2009, according to Elizabeth Perry, chief of base housing management.

The upgrades include living spaces that are more functional and user-friendly, according to base officials.

Coburn said the changes are especially noticeable in the kitchen, where cabinets and countertops are new and a wall between the dining area and kitchen is gone, opening up the room.

But Coburn&#8217;s favorite feature is the covered patio and adjacent storage room at the front of the house.

"Before the snow blower had to sit out in the open," covered by a tarp, he said. "This is a major improvement from the old H-style housing."

Not all the newly renovated homes are occupied, yet.

"Housing is trying to move families that need to be moved due to the renovation project to newly renovated houses," Perry said in a written response.

"This may not happen all of the time but we&#8217;re doing the best we can to make it happen. Housing also gives families the choice to move off base or to another on base unit."

The next round of renovations is due to begin in April 2009, with a total price tag of $110 million.

Of the 539 units, most are in the north area, according to Perry, except for 30 H-style houses on main base. Most units are being vacated through attrition, Perry said.

For families who will need to be relocated due to the renovation, the housing office plans to notify them 90 days prior to the move, she said.

While the start of the renovation project in early 2007 precipitated a housing crunch, base officials said there&#8217;s no longer a wait for homes on or off base.