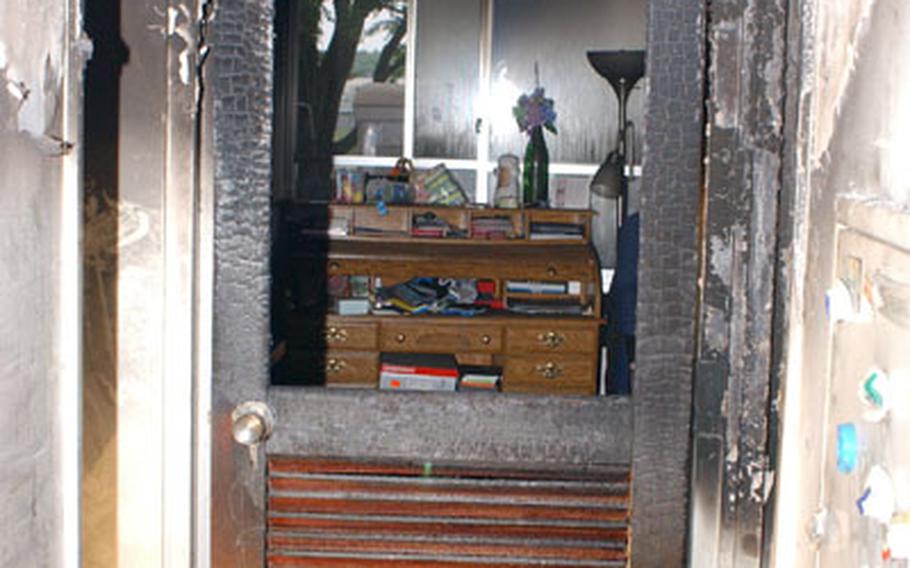 A closet and walls in an H-style residence on Main Base at Misawa Air Base, Japan, were charred in a house fire Tuesday. (Courtesy of U.S. Air Force)

MISAWA AIR BASE, Japan &#8212; The cause of a Tuesday house fire here is under investigation.

The fire in 817B on Main Base began while its occupants were on leave in the States, said Senior Master Sgt. Jeffrey D. Felty, base deputy fire chief.

Neighbors reported the blaze around 3:50 p.m. after seeing smoke and hearing smoke detectors in the home go off.

No one was injured, but the home sustained significant fire and smoke damage on the first floor. &#8220;It&#8217;s not inhabitable,&#8221; Felty said. Specific damages are being evaluated. Felty said the government H-style unit is valued at $200,000.

Firefighters found a fire burning in a first-floor closet underneath the stairs, in the hallway and in a bathroom across from the closet, Felty said. The flames were extinguished within five minutes.

The family was contacted in the States on Tuesday, he said, noting the occupants said they had renter&#8217;s insurance.

&#8220;They were taking care of the dogs,&#8221; Felty said. The animals were evaluated at the veterinary clinic and appeared fine, he said.

The adjacent housing units are being evaluated for smoke damage as well, Felty said, but appear to be habitable.

Felty said firefighters visit base housing residents weekly to educate them about fire safety, sharing tips, among others, on fire prevention while one is away. Those include unplugging all nonessential electrical items, such as portable heaters; testing smoke detectors and sealing doors and windows.