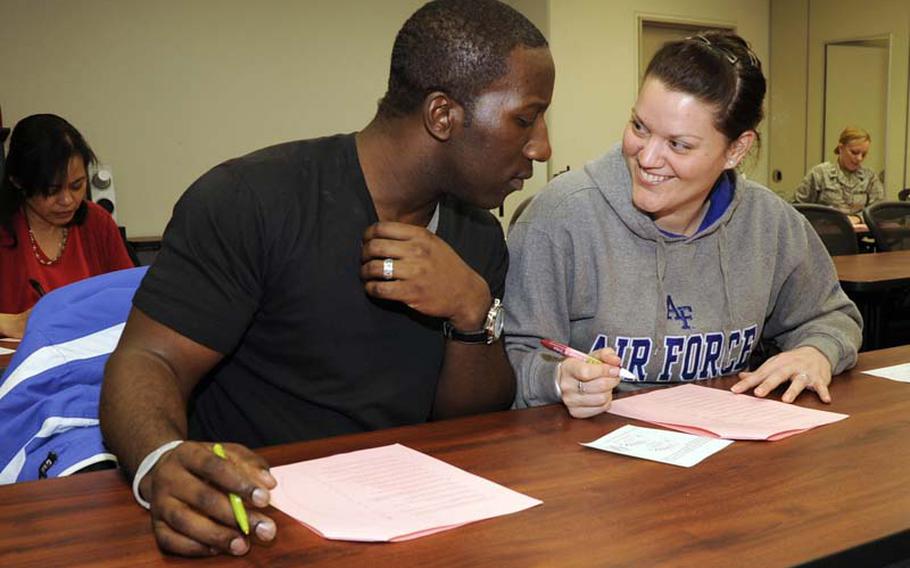 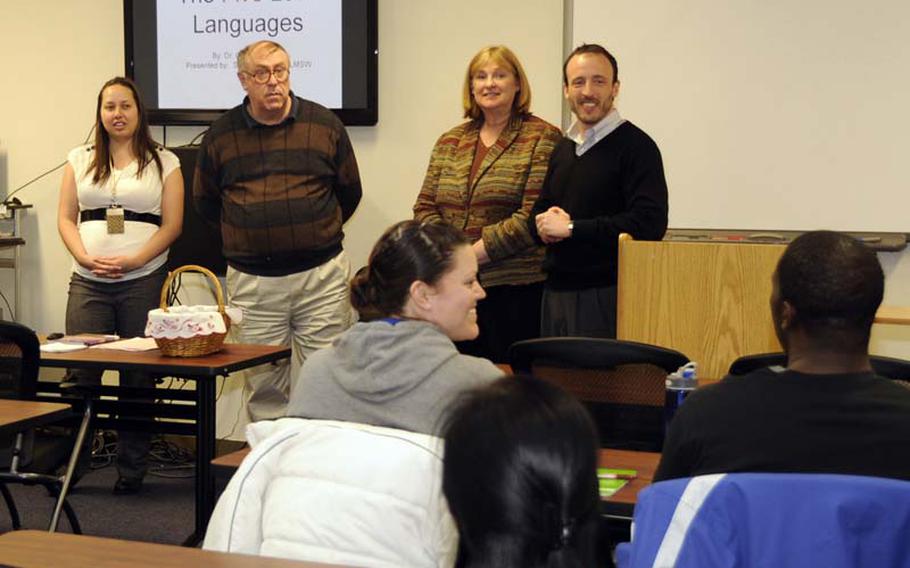 SASEBO NAVAL BASE, Japan &mdash; Books like &ldquo;Men are from Mars, Women are from Venus&rdquo; or the &ldquo;Five Love Languages&rdquo; might not be what you would expect to find on the bedside table of a hardened combat veteran.

But Misawa Air Base leaders are using these introspective texts to help servicemembers strengthen their bonds at home and stave off relationship-related depression.

The books are part of a unique program called &ldquo;Happy Couples,&rdquo; which was designed by base leadership and the Airman and Family Readiness Center, and teaches participants everything from &ldquo;fair fighting&rdquo; to active listening and how best to manage relationships no matter the situation.

The program was heralded by participants in its first installment in March and was so successful that base leadership this week started another six-week slice of love, romance and relationship building through literature.

&ldquo;Relationship problems are one of the highest risks for suicide in today&rsquo;s military population,&rdquo; said Air Force Capt. Heather Nachazel, a family advocacy officer at the base, and one of the program&rsquo;s creators. &ldquo;The Happy Couples class is important to all servicemembers in general because the content is to help mend and prevent common relationship issues.&rdquo;

Most bases in Japan have some sort of couple&rsquo;s or relationship-building classes, according to representatives from several bases in Japan, however the program in Misawa is unique in that most of it is based on popular best-selling texts and the base&rsquo;s own curriculum. Misawa, like Yokosuka Naval Base, also has a class on healthy inter-cultural relationships.

The class is especially important to base residents at Misawa, located in northern Japan, because they have limited resources and a limited number of providers available to treat struggling couples, said Nachazel, who is also a licensed clinical social worker. In the States, couples can receive free marital counseling from Military One Source.

&ldquo;The reaction has been positive so far,&rdquo; said David Powell Jr., outreach manager for family advocacy. &ldquo;We remind people that relationships are that safe place where you can let your guard down and take your uniform off. You create that feeling of safety.&rdquo;

The first class, open to all sailors, airmen and civilians at the base, started on March 1, and ran for six weeks. The dozen-plus participants included divorced and remarried, newlyweds, people dating and single airmen, Powell said. Approximately the same number are taking part in the current class.

Nachazel said the subject matter has already been proven to work in private couples sessions, and now they hope to be able to reach more through Happy Couples. Base leadership hopes to offer the program quarterly.

Airman 1st Class Kaleb Snay arrived in Misawa several months ago, leaving a girlfriend of three years back in the States. Snay said he is on a multi-year deployment and will get home for the first time after 10 months on station. He said their schedules make it tough to communicate and currently, Yahoo Messenger and Facebook are the only things keeping the lines of communication open.

The airman said the program helped the pair feel closer.

&ldquo;Even though we&rsquo;re far apart, we can still feel close,&rdquo; he said during the class in March.

Two weeks into the class, Snay was already sharing what he had learned with his girlfriend back home.

&ldquo;I&rsquo;m always up for anything that will strengthen my relationships,&rdquo; Snay said. My girlfriend &ldquo;thought it was really cool. She likes going through these types of things with me.&rdquo;

Snay said he enjoyed learning about Dr. Gary Chapman&rsquo;s five love languages, or the art of identifying the way individuals feel loved, such as &ldquo;words of affirmation, quality time, receiving gifts, acts of service, and physical touch,&rdquo; according to Chapman&rsquo;s website. Snay said identifying which language works for which person is the key to making anyone feel special and loved. He said this can be applied to any relationship, not just those romantic in nature.

Powell said the principles of making marriages work, welcoming home a new baby, active listening, expressing one&rsquo;s feelings, staying calm during a fight, and how to keep arguments &ldquo;above the belt&rdquo; also are featured in the class.

The command has tried toovercome any stigma associated with such a feelings-centric program through radio spots and by reminding servicemembers of the benefits of healthy relationships.

&ldquo;It can&rsquo;t always be roses,&rdquo; Powell said, turning his attention to the tools taught in the class. &ldquo;You don&rsquo;t want [those bad feelings] to sit in you.&rdquo;