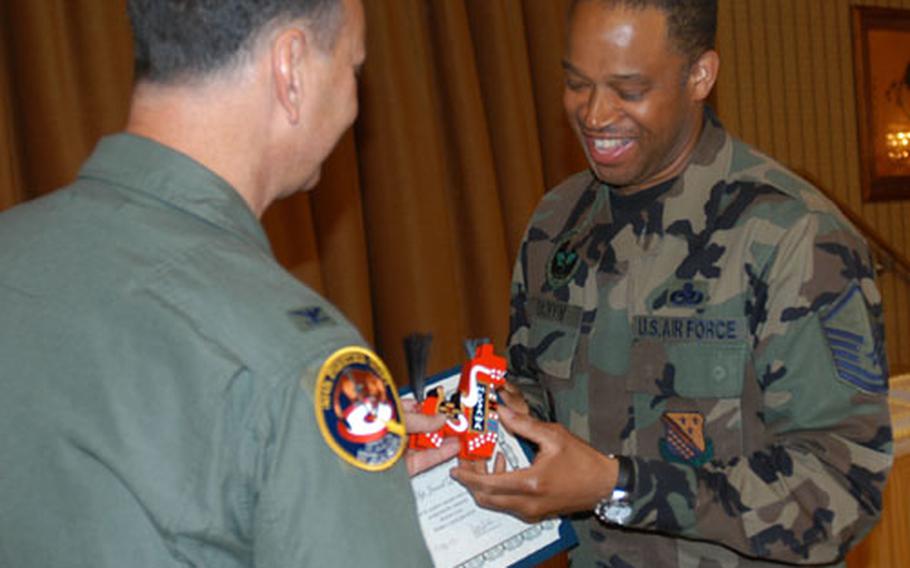 There are more than 600 volunteers at this base helping more than 30 base agencies stretch their budgets to offer more services to the Misawa community.

They were honored Thursday with a free luncheon at the Mutsu Officers&#8217; Club and thanked for more than 96,000 hours of charitable work.

&#8220;Not only does it give individuals a chance to be a part of the community, but they also provide programs that without their contribution, wouldn&#8217;t exist.&#8221;

Numerous volunteers were recognized Thursday but six were singled out for exceptional service, receiving the G.I.V.E. &#8212; Giving Individual Volunteer Effort &#8212; Award. They are:

&#8226; Senior Master Sgt. Mike Heath and wife Tonya earned the award as a couple for donating countless hours to Misawa&#8217;s Thrift Store and the Enlisted Community Organization. The parents of three turn hours given to charity into family time.

&#8226; Tech. Sgt. Krista Valentine has volunteered at the Progressive Animal Welfare Society (PAWS), the base&#8217;s shelter for abandoned and stray cats and dogs, for a year. The 35th Communications Squadron photographer checks on the animals every other day, cleans kennels twice a week and sits on the board of directors. She volunteers simply because she loves animals.

&#8226; Military spouse Kristi McFadden said volunteering twice a week to lead the newcomers&#8217; tour has been the highlight of her time at Misawa.

Though pregnant when she and her husband, Jeramis, moved to Misawa two years ago, she signed up to be a tour guide because of her experience on her first tour.

&#8226; Master Sgt. Jamal S. Qaiyyim designed &#8220;Computers for Beginners&#8221; and &#8220;Home Theatre 101&#8221; for the Family Support Center and teaches each course once a month. He also volunteers for the Safe Haven/Noncombatant Evacuation operation exercises and for AFN as a broadcaster; he tutors kids at Cummings Elementary School and teaches guitar lessons.

Call DSN 226-4735 for more information about volunteer opportunities at Misawa or visit the Family Support Center.