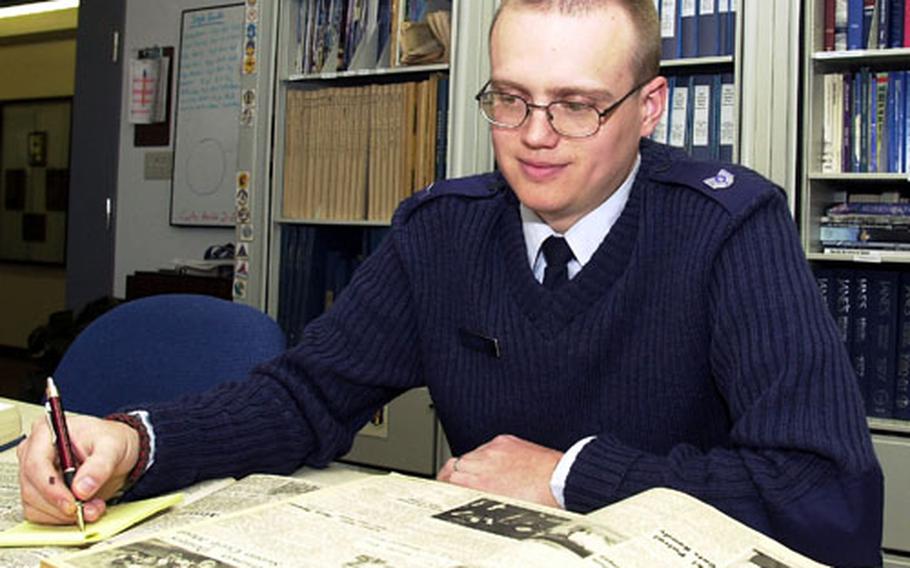 Tech. Sgt. Clifford Sibley is the historian for the 35th Fighter Wing at Misawa Air Base, Japan. Sibley returned this spring from Qatar, where he documented the movements of the region’s largest U.S. Air Force expeditionary fighter wing deployment during Operation Iraqi Freedom. (Jennifer Svan / S&S)

Sibley was one of two historians assigned to the 379th Air Expeditionary Wing at Al Udeid Air Base, Qatar, before and during the combat phase of Operation Iraqi Freedom.

Sibley and his counterpart worked a combined 30 hours a day recording movements of the largest U.S. Air Force fighter wing in the region.

Sibley said he interviewed the wing commander every week and had access to countless war files and documents.

He recorded the compelling moments and the minute details.

It was an assignment fraught with adrenaline and emotions, tremendous highs and lows according to Sibley.

One of Sibley&#8217;s goals going into the assignment was to keep such a meticulous record of bombing missions that any accusations of a misfired strike could be either refuted or confirmed, he said.

Sibley said he was often privy to events before they occurred.

He was there when war planners discussed strategies for the pre-dawn &#8220;decapitation&#8221; strike on Saddam Hussein in March 2002 and interviewed the air crews within 30 minutes of their return.

Being present at planning meetings enables a historian to type a memo of record of what he or she witnesses, Sibley said.

Access to staff members, air crews, documents and meetings is at a commander&#8217;s discretion, though Air Force guidance says &#8220;they&#8217;re supposed to give us access to everything,&#8221; Sibley said.

Sibley and his colleague produced 11,000 documents, some more than 300 pages, and 1,300 photographs, mostly on CD-ROM. Ninety-five percent remains classified. The files will be studied by commanders.