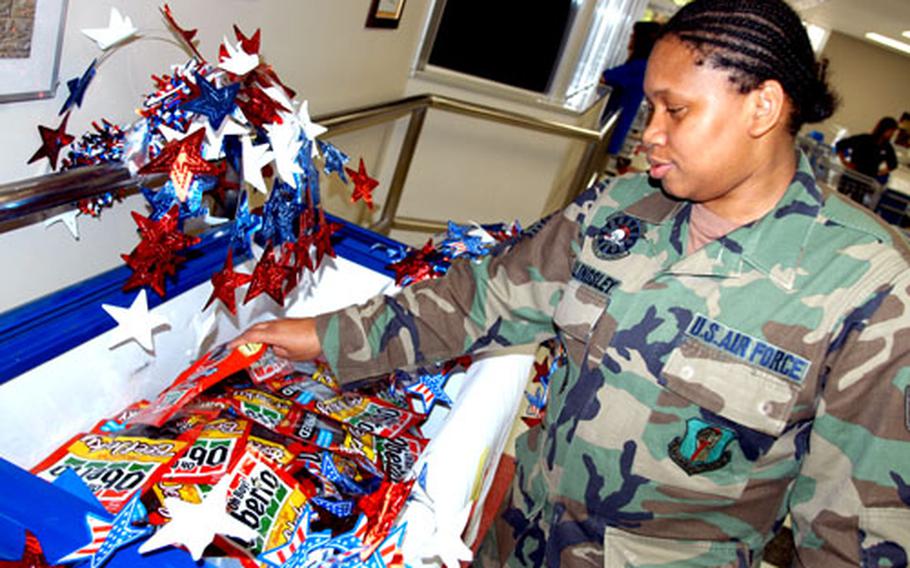 Staff Sgt. Gwenly Billingsley donates a bag of beef jerky to deployed airmen from Misawa Air Base, Japan, Monday. Customers could buy beef jerky at Misawa&#39;s commissary at a discount for troops downrange. The 35th Fighter Wing chapel is putting together care packages for the airmen. (Jennifer H. Svan / S&S)

On Monday, Misawa&#8217;s commissary and the 35th Fighter Wing chapel held a beef jerky drive to send bags of the chewy dried meat strips to Misawa airmen deployed to the Middle East. Officials from both organizations said beef jerky is No. 1 on troops&#8217; wish list, right above gourmet coffee.

Customers who donated were entered into a drawing for a $25 commissary gift certificate, said Trish Reams, Misawa district manager for contractor Webco. The goal was to collect about 400 bags of beef jerky in two days.

Before airmen deploy, the chapel asks them if they&#8217;d like to receive a care package, Sample said.

The goodies will go in the mail as soon as the chapel obtains airmen&#8217;s downrange addresses.

Nearly 700 Misawa airmen currently are deployed, including 70 from the 35th Logistics Readiness Squadron.

Beef jerky is the snack of choice in the desert because it doesn&#8217;t melt and it provides more sustenance than candy, said Lackman, who returned recently from convoy duty downrange with the Army.

Care packages are going out every month, Sample said, and people can donate by stopping by the chapel.

Separately, the chapel also is sponsoring a clothing drive for adults and children in Afghanistan.