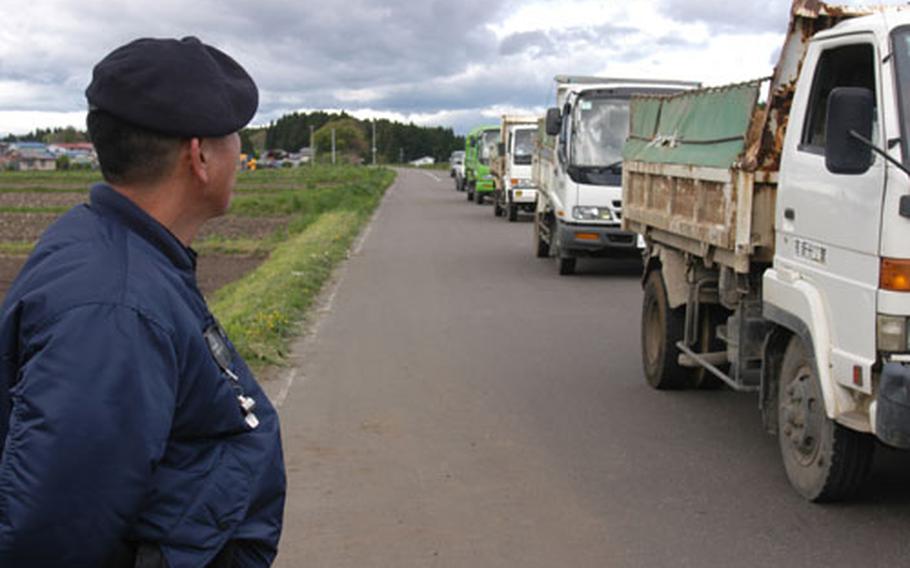 A Japanese national guard watches as delivery trucks head toward the Kamakita Gate at Misawa Air Base, Japan. The gate was opened after Pacific Air Forces mandated that all delivery and construction vehicles, 3/4-ton and heavier, be inspected upon entering Air Force bases in the Pacific. (Jennifer H. Svan / S&S)

MISAWA AIR BASE, Japan &#8212; Though far from the epicenter in the war on terrorism, this northern Japan base is beefing up security at three of its gates with nearly $2 million in upgrades.

The new requirements were published in December 2002.

The force protection devices being installed at Misawa are designed to prevent a vehicle from running the gate, Harner said.

The high curbs, for instance, &#8220;forces traffic to stay in the driving lanes so it basically traps you in those areas&#8221; where the barriers can be most effective, Harner said.

Construction at Misawa began last month. The estimated completion date was moved back from August to late fall because of an equipment delay: Only one manufacturer, Delta Scientific, is certified by the Department of Transportation to supply the mechanical steel plate, Torres said. The Defense Department has ordered the devices be supplied to more critical areas first, he said.

Harner said the new measures won&#8217;t affect gate manning. Commuters can expect some delays during part of the construction phase, as the incoming and outgoing lanes will be combined during daytime work hours.

The Levitow gate is closed; it opens only when the main gate is shut, Harner said.

The Air Force is funding the project. Upgrades to the Friendship (or main) Gate cost about $1 million, while Falcon and Levitow improvements cost about $500,000 and $400,000, respectively. Local contractors, Kajima Road and Tanaka Gumi, are doing the work.

Two previously shuttered gates at Misawa Air Base are now open to delivery and construction vehicles only.

The Kamakita Gate, named for the town on its opposite side, was used after Sept. 11, 2001, and reopened March 29 to delivery and construction vehicles &#8212; about a week after the PACAF directive was issued, Harner said.

The base opened the North Area Gate a week ago to ease the logjam through Kamakita town, Harner said. The gate, open Monday through Saturday from 6 a.m. to 4 p.m., is flooded with 600-800 vehicles a day, said Master Sgt. Paul Blackwell, superintendent of host nation construction, and some town residents complained.

The traffic would have been compounded by the recent start of the next phase in the airfield taxiway project. About 10,000 feet of concrete is being widened by 175 feet and about 400 trucks daily are bringing in wet cement, 24 hours a day. Rather than diverting them through Kamakita, the base opened up the North Area Gate to the construction vehicles.

A portion of Falcon Drive had to be closed in order to inspect the trucks; the closure prevents people from driving the entire loop around Misawa Air Base, officials said.

Falcon Drive will briefly reopen in the evenings during the runway closure, when the airfield will be resurfaced &#8212; a separate project from taxiway expansion. The North Area Gate will be open to construction trucks carrying asphalt from 6 a.m. to 6 p.m., seven days a week; the airstrip will close June 4 at 8 p.m. and reopen June 18 at 6 a.m.

Augmentees from various squadrons are helping security forces with the inspections, Harner noted.