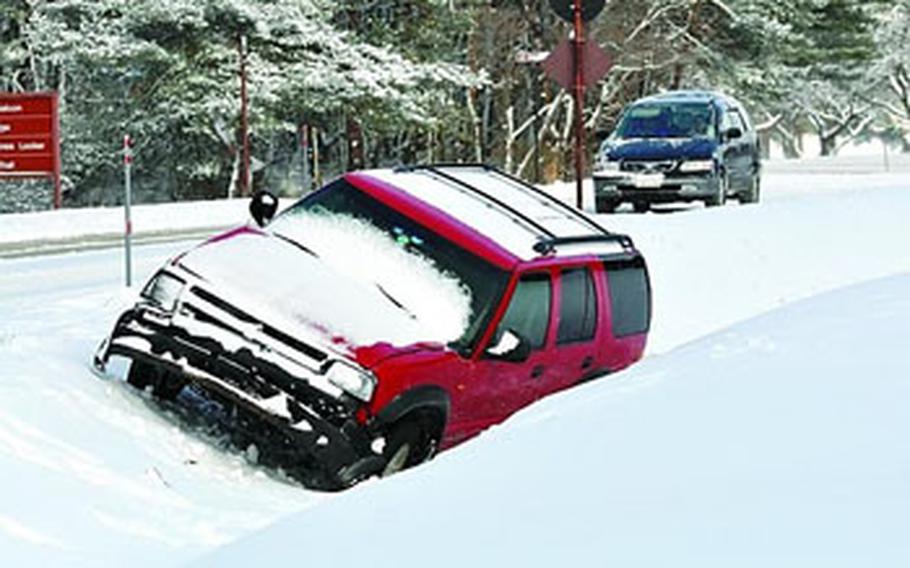 Safety officials say there were no injuries suffered when the driver of this truck lost control and ended up in the ditch near the golf course last week on Misawa Air Base, Japan. (T.D. Flack/Stars and Stripes)

Lt. Col. Aaron Steffens, chief of safety at the base in northern Japan, said residents have been involved in 24 collisions and mishaps between Dec. 15 and 21 &#8212; eight of them on Dec. 15. Fifteen of the accidents occurred off base, where the Japanese don&#8217;t plow the snowy, icy roads, he said.

Steffens said only two minor injuries have resulted, thanks mainly to the fact that the majority of accidents happened in parking lots or at intersections.

Staff Sgt. Scott Winstead, a ground safety technician in the safety office, said the base normally sees a lot of accidents with the first big snow.

Drivers "need to slow down," he said.

Steffens agreed, adding that drivers must "drive for the conditions."

It hasn&#8217;t been a promising start for the season, Steffens said, pointing out that the highest accident numbers are in January and February, an average of 35 and 38 respectively.

In an effort to lower those numbers, his office has created a program called the Slippery Weasel to give licensed drivers first-hand experience in how their cars will respond to snowy and icy road conditions.

Those who sign up for the program will attend a one-hour classroom session, followed by a behind-the-wheel lesson in a large parking lot on base.

Winstead said they&#8217;ll get to slip and slide, while learning how to stop and steer.

Steffens said his office talked to officials at Spangdahlem Air Base in Germany, which runs an intensive, year-round course.