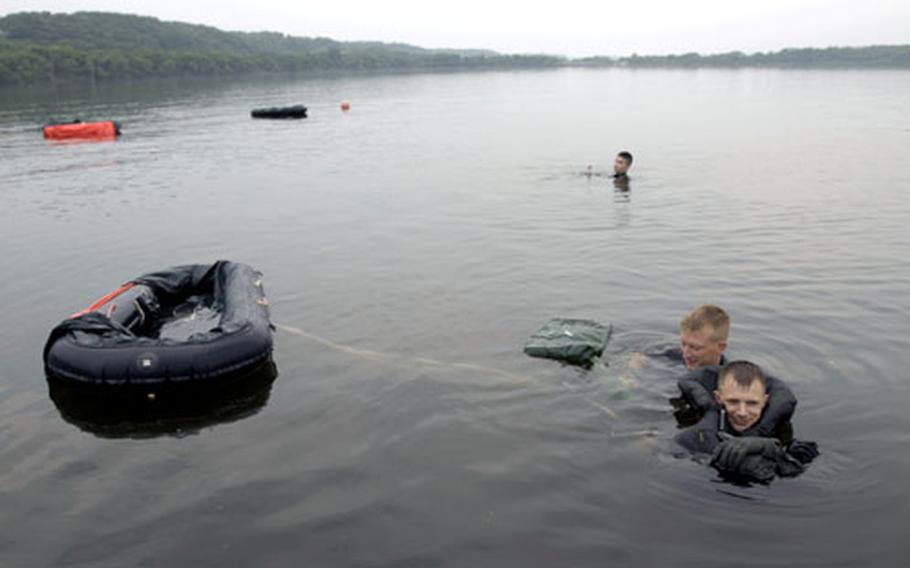 MISAWA AIR BASE, Japan &#8212; On a humid morning Wednesday where skin feels sticky and clothes feel icky, the tepid water of Lake Ogawara is almost inviting.

But the F-16 pilots swimming in boots and flight suits, while dragging parachutes behind them, know the water might not always feel this good.

Fighter pilots at Misawa spend most of their training in a cockpit. But once a summer, they take to the water for survival training &#8212; even though the Air Force mandates it for its aviators once every three years.

It&#8217;s been more than seven years since an F-16 pilot assigned to Misawa ejected over water. But 90 percent of the 35th Fighter Wing&#8217;s flying in northern Japan is over water in a single-engine jet, Jewell noted.

If a pilot ends up in the water, he&#8217;ll look to the Japanese military for rescue. Japan Air Self-Defense Force units in Chitose and Akita have the aircraft and the rescue swimmers for the job.

It was Chitose pararescuemen who pulled Col. Mike Lepper, then the 35th Operations Group commander, from the Sea of Japan on Nov. 13, 2000, after he ejected following a midair collision near Hokkaido.

Members of that unit visited Misawa this week to talk water survival and share lessons learned. They sat through classroom training and observed Misawa pilots in the water Wednesday, during their first such visit, according to Jewell.

"They requested it," Jewell said.

One important piece of information shared was how to identify a Misawa pilot in the water.

The Japanese said in 2000 it was difficult to spot Lepper in his dark, one-man life raft. Guidance then dictated that pilots not expose the raft&#8217;s bright orange panel until they had positive identification of a rescue aircraft. There was more of a Cold War mentality back then, with more caution exercised to avoid attracting an enemy boat, Jewell said.

The orange flap is now visible, he said. Other tools pilots use to help them get seen include bright red smoke flares and signal mirrors in daytime and red flame-popping night flares, according to Staff Sgt. Ben Thomas, one of two SERE specialists at Misawa. They also can radio for help on an international distress call frequency, he said.

Working with the Japanese to ensure a smooth rescue when it&#8217;s needed is critical, Jewell said.

"It has to work the first time. Our lives depend on it," he said.