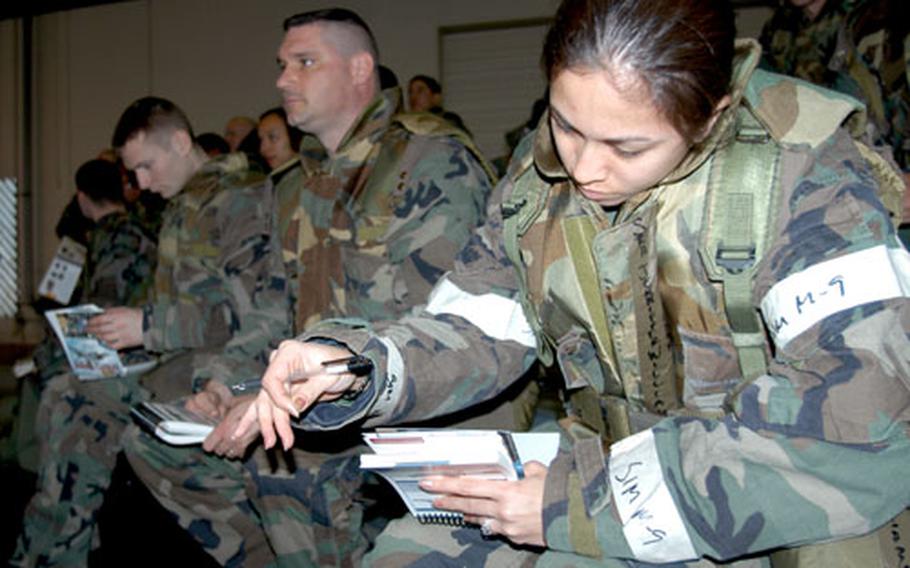 This week more than 250 bluesuiters here are priming for a practice drill that will test them under fire.

Misawa will stage an operational readiness exercise Feb. 23 to March 2. For the first half, 35th Fighter Wing military personnel will go through the motions of deploying to war. The latter part will transform the base into a fictional combat zone for a &#8220;fight-in-place&#8221; exercise scenario, say wing plans and programs officials.

No major road closures for extended periods are expected on during the exercise, base officials said. Customers may experience longer waits at some facilities due to reduced manning, said base spokesman Capt. John Redfield.

Wing newcomers and exercise evaluators were required to attend training one day this week to help them prep.

Compact enough to fit in a battle-dress-uniform pocket with weatherproof and tear-resistant pages, the Airman&#8217;s Manual has been described as an airman&#8217;s most important deployment tool, a compilation of the latest Air Force war skills, tactics, techniques and procedures.

The training isn&#8217;t required of all airmen &#8212; at least not yet. Master Sgt. Gregory Beisley, a 35th Fighter Wing plans and programs manager, said it may be mandatory for all wing military personnel the closer it gets to Misawa&#8217;s next operational readiness inspection, tentatively slated for March 2007.

At training Tuesday, airmen shuffled between stations weighted down in Mission Oriented Protective Posture level 2 gear, including rubber boots and flak jacket, with their gas mask and gloves in a bag.

&#8220;It&#8217;s like an extra 40 pounds,&#8221; said Airman 1st Class Jamell Lewis, a 21-year-old aircraft structural maintenance journeyman from Detroit. Two months into his first Air Force assignment, he didn&#8217;t mind going through the training, figuring it would help if and when he&#8217;s called to deploy.