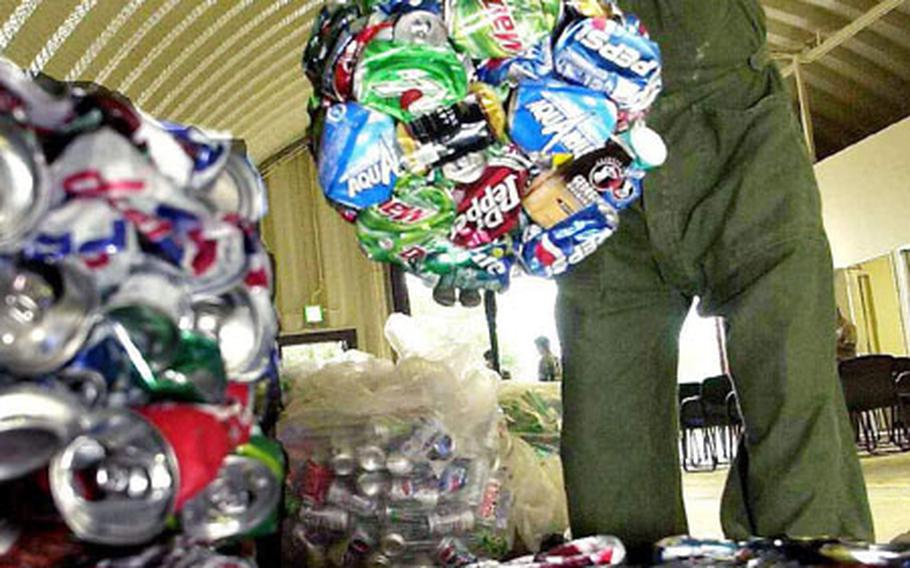 Navy and Air Force environmental offices at Misawa Air Base in northern Japan are co-partners in a recycling operation helping to keep recyclable waste, such as these compacted aluminum cans held by Hajime Sasaki, from going into landfills. (Wayne Specht / S&S)

MISAWA AIR BASE, Japan &#8212; Photographers at the naval air facility here ensure a cleaner environment every time they snap a photo.

That&#8217;s because the Fleet Imaging photo operation here now shoots exclusively with digital cameras, relegating to history the use of pungent-smelling and hazardous chemicals for conventional film and paper print developing.

Since 2001, in partnership with the Air Force environmental office at the base, the Navy has diverted more than 18,000 gallons of hydraulic fluids used in aircraft, cranes and other industrial equipment.

Teasley&#8217;s office reviewed lists of hazardous materials used by Misawa Navy and Air Force units. &#8220;We looked to see if comparable items could be used so we wouldn&#8217;t have to track so many items&#8221; or pay to dispose of certain ones, he said.

A stock list of 1,500 chemicals and petroleum products was consolidated to just 500 items, creating additional savings of up to $15,000.

&#8220;We learned if you manage hazardous material on the front end, it reduces the costs of having to rid yourselves of leftovers later,&#8221; Teasley said.

In the past 18 months, NAF has worked to replace lead-acid vehicle batteries containing harmful sulfuric acid with gel-cell batteries kinder to the environment.

Ethylene glycol fluid, used to de-ice aircraft, was replaced with polypropylene glycol, which won&#8217;t harm the environment should it find its way into a storm drain.

In 2001, the two services partnered to help reduce landfill deposits by opening a limited recycling operation on base, for white paper products, corrugated cardboard and aluminum cans.

&#8220;We have a great working relationship with the Navy environmental folks,&#8221; said Fernando Rodriguez, chief of the 35th Civil Engineer Squadron&#8217;s Environmental Flight.

&#8220;When the Navy needs help with recycling or other environmental issues, we&#8217;re there for them. Likewise, they are always willing to help us with our recycling efforts in areas such as manpower and vehicle support.&#8221;

Each year, the Navy organizes a volunteer cleanup at the scenic Oirase Gorge, 40 miles from the air base, and the Air Force runs the annual Misawa fishing port cleanup.