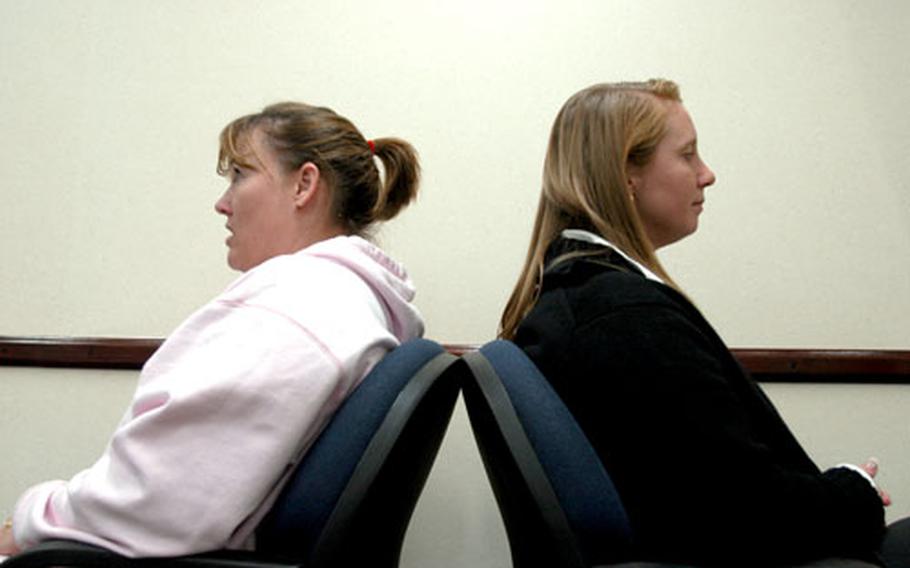 MISAWA AIR BASE, Japan &#8212; The woman sits hunched in the chair, covering her face and sobbing. Stephanie Colon, a staff sergeant, tries to comfort her, find out what happened and inform the woman of her reporting options.

Later, the woman, Chief Master Sgt. Sandy Ware, said her tears were real. Sexual assault can be an intense, emotional topic, even in a role-playing scenario.

Ware played the fictional rape victim of her active-duty husband&#8217;s best friend, and Colon was her assigned victim advocate. They were among 17 volunteers recently certified as Misawa&#8217;s newest victim advocates.

Since June, the base has trained 35 men and women to assist sexual assault victims as part of a new program to improve services to rape victims and ultimately make servicemembers feel more comfortable about reporting sexual crimes.

Sexual Assault Prevention and Response stems from a 16-month Air Force assessment, which coincided with an overall Defense Department review, targeting gaps in the Air Force&#8217;s capabilities to respond to and prevent sexual assault, according to Air Force officials.

The program incorporates new DOD policy that allows victims to maintain confidentiality while seeking medical care and counseling by making a &#8220;restricted report.&#8221; The Air Force previously had no service-wide policy dealing with sexual assault. In the past, a sexual assault report only triggered a criminal investigation.

Leading Misawa&#8217;s program is Capt. Meredith Ortiz, the base&#8217;s sexual assault response coordinator, or SARC. She&#8217;s training the victim advocates and briefing units on the new DOD policy, including the definition of sexual assault and the differences between restricted and unrestricted reporting.

&#8220;The only way for restricted reporting is to contact your health care provider or SARC,&#8221; Ortiz said. &#8220;If the victim reports it to anybody within the chain of command, the restricted automatically goes out the door.&#8221;

Restricted reports are still documented. Ortiz sends those numbers to PACAF but excludes the victim&#8217;s name and uses generic information, such as when the incident happened, number of victims and assailants and the type of incident.

Ortiz said the Air Force expects the number of sexual assault reports to go up as people grow more aware of the new program.

As SARC, Ortiz is typically the victims&#8217; first point of contact. Upon receiving a call or report about a possible sexual assault, she immediately assigns an advocate to the person.

A former maintenance section commander, Ortiz has a master&#8217;s degree in counseling and psychology. She began last week&#8217;s training session by asking volunteers to explain why they were there.

The advocates discussed the complexities of sexual assault crimes in the military and how those might affect a victim.

&#8220;We emphasize obedience, hierarchy and loyalty,&#8221; Ortiz said of the military culture.