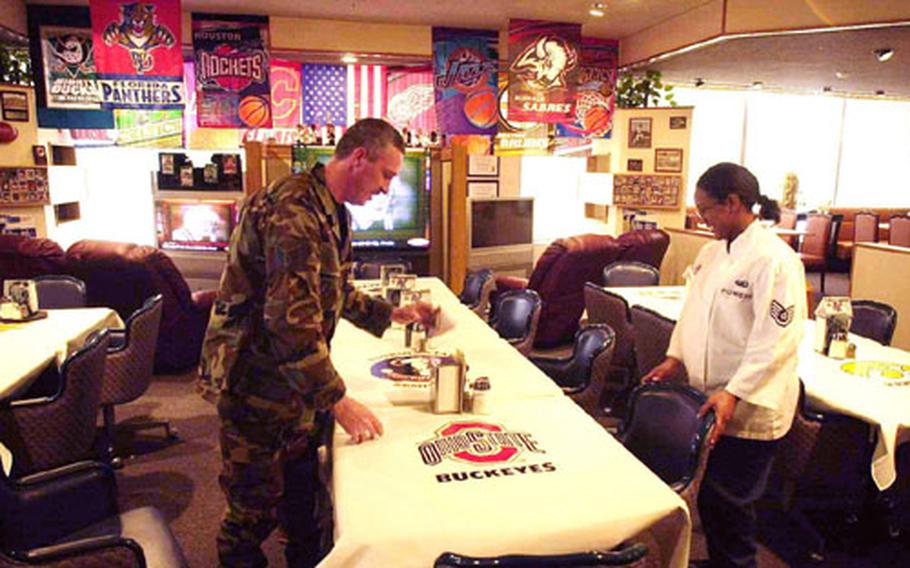 MISAWA AIR BASE, Japan &#8212; Look beyond the sports banners, cushy reclining chairs and the Xbox video consoles in the Grissom Dining Facility here and you just might find a military dining hall lurking within.

But after Internet-linked computers are installed in Grissom&#8217;s cyber caf&#233;, who would want to leave it all behind to go to work each day?

A warm and inviting ambiance is just what Tech. Sgt. Tony Flowers, Grissom&#8217;s food service manager, had in mind when he initiated a self-help project to revamp half of the facility.

And since his food service staff has invested some 650 hours of labor to complete the project, Flowers says, he&#8217;s seen customer usage surge by 20 percent.

Troop complaints about the facility&#8217;s atmosphere had much to do with it.

&#8220;We were seeing an all-too-common complaint on our customer comment cards that troops felt the facility was too industrial; it looked like a chow hall,&#8221; said Flowers, a veteran of 16 years in Air Force food service.

But before he joined the Air Force, Flowers was a carpenter at Disney World in Orlando, Fla. For this project, he called on both sets of skills: woodworking and food service management techniques.

Tables in front of a giant-screen television in the sports pub section are festooned with colorful logos of leading American college teams.

Along one wall is a baseball-card collection encased in glass. An autographed photo of home-run king Hank Aaron hangs on another.

Overlooking the sports pub is the cyber caf&#233;, with its overstuffed sofa, framed pictures and knick-knacks combining to produce a cozy ambiance.

&#8220;We&#8217;ll be installing three computers into the wall linked to the Internet by high-speed ASDL connection so troops can come in and check their e-mail for up to 30 minutes at a time,&#8221; Flowers said.

Another potential addition being considered: wireless Internet access for those with laptops and the right connection equipment.

The dining facility normally serves meals at set times but other options will be offered when the revamped portion has a &#8220;soft opening&#8221; Jan. 20.

Another section of the Grissom houses a special-events room with a huge banquet-style table and a 53-inch plasma television screen. The section can be reserved for military meetings or unit gatherings.

Had the renovation been contracted out, Flowers said, it would have cost an estimated $120,000.

Staff Sgt. Anna Powers, in charge of Grissom&#8217;s in-flight kitchen operation, was among those who learned a bit of woodworking.

Next up, Flowers says, is transforming another portion of the dining facility into one similar to an Applebee&#8217;s restaurant motif.