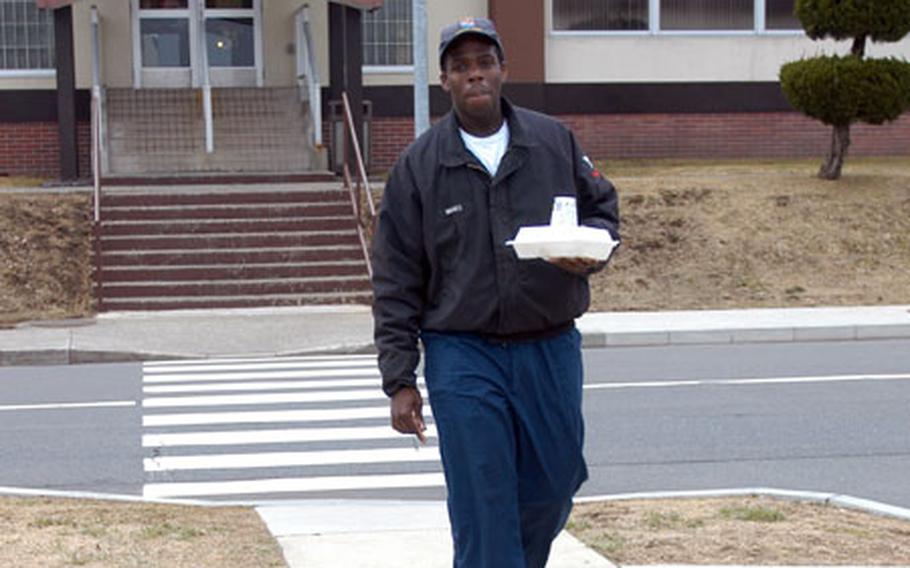 Petty Officer 3rd Class Albert Hughes, 23, said he usually gets takeout for breakfast and lunch, preferring to eat at work or elsewhere over the dining hall. But after April 1, takeout will be eliminated at Misawa Air Base&#39;s Grissom Dining Facility and Falcon Feeder due to budget constraints. (Jennifer H. Svan / S&S)

Petty Officer 3rd Class Albert Hughes, 23, said he usually gets takeout for breakfast and lunch, preferring to eat at work or elsewhere over the dining hall. But after April 1, takeout will be eliminated at Misawa Air Base&#39;s Grissom Dining Facility and Falcon Feeder due to budget constraints. (Jennifer H. Svan / S&S) 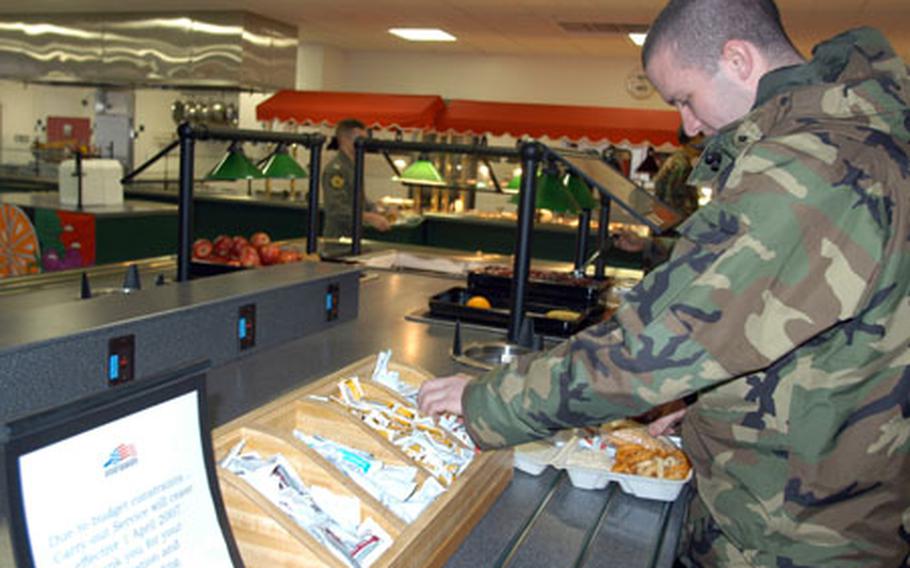 Airman 1st Class Noah Kelley, a Petroleum, Oil and Lubrication Systems airman at Misawa Air Base, Japan, grabs lunch to go Tuesday at Grissom Dining Facility. Takeout at both Grissom and the Falcon Feeder will be eliminated April 1 due to budget constraints. (Jennifer H. Svan / S&S)

MISAWA AIR BASE, Japan &#8212; To-go meals are on their way out the door at Misawa&#8217;s two enlisted dining facilities beginning April 1.

Citing a budget that&#8217;s even sparser than last year&#8217;s, 35th Services Squadron officials said the new policy is necessary to stretch supply dollars through the end of the fiscal year.

&#8220;We took a significant cut, just like everyone else across the wing,&#8221; said Ricky Harness, the squadron&#8217;s deputy director. &#8220;We are trying to apply the funding that we have in the most efficient manner to keep our activities running.&#8221;

Harness said carry-out materials, such as Styrofoam &#8220;clamshell&#8221; boxes, plastic silverware, paper napkins and condiments, eat up nearly 30 percent of the supply budget for Grissom Dining Facility on the main base and the Falcon Feeder near the flight line. But only about 10 percent &#8212; 59 per day &#8212; of customers use takeout, he said.

The chow hall policy change is the second in a year due to budget constraints: Last March, takeout was limited to uniformed personnel, with an estimated monthly cost savings of $750 to $1,000, officials said then.

Those expected to be most affected by the new rule are aircraft maintainers, firefighters, first responders and security forces personnel, who often must eat on the run due to mission requirements, officials said.

That group also should include 35th Logistics Readiness Squadron airmen who work with petroleum, oil and lubrication systems, according to Airman 1st Class Noah Kelley.

Services officials said they looked at other ways to continue takeout with limited funds but came up short.

Another option discussed was allowing squadrons with the primary takeout users to funnel funds to the dining hall for supplies, Harness said, but, &#8220;unfortunately, we&#8217;re all in a tough fiscal condition this year and they have other priorities that they have to focus on.&#8221;